Sega’s Relic studio is bringing back World War II real-time strategy next year, starting today with the unveiling of Company of Heroes 3.

Such games test your ability to control both the tactical real-time 3D battles and the thoughtful turn-based strategic 2D campaigns. And this one is set in Italy, as U.S. and British forces try to dislodge the entrenched German Army from places such as the Monte Cassino monastery on top of a mountain.

I played an early preview of the game that will arrive sometime in 2022. And I am beyond excited, as it has been more than eight years since Company of Heroes 2 debuted in 2013 with a Russian Front setting. I loved playing the original Relic/THQ title, Company of Heroes, when it came out in 2006 with a Normandy/Cobra battleground. Talk about pent-up demand. I suspect I’m not the only one who is homesick for these amazing 3D games on the PC.

In the game, you serve as a general in charge of the overall campaign where you have to use your combined arms to throw back the Germans from the beaches and hardened positions in the cities. You can automatically resolve battles between units, or move into a tactical battle for control of a key point such as an airfield.

David Littman, the executive producer of Company of Heroes 3 at Relic, said in an interview with GamesBeat that the game has been a long time in the making because the ambition is to make it as impressive as an action game, despite its RTS legacy. It’s also such a big war theater and large game that you can feel like you’re in a sandbox battlefield, Littman said. 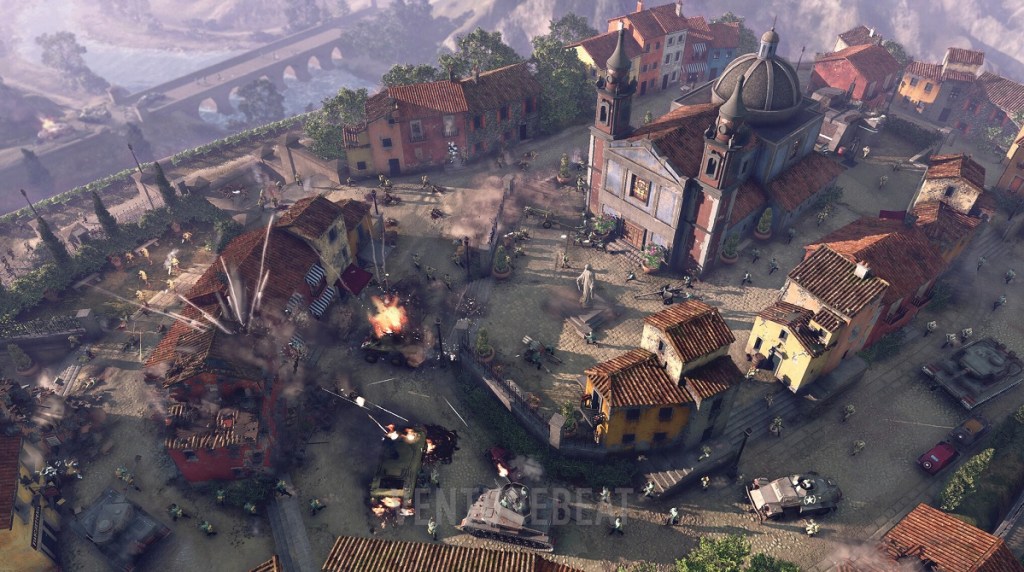 Above: Beautiful Mediterranean environments are destroyed in Company of Heroes 3.

“It’s been a while,” Littman said. “It was a matter of how to bring back what people love about Company of Heroes but also update our game to make it look best-in-class for today’s games. We don’t even consider ourselves an RTS. We consider it an action-strategy game, and we want to compete with the best in the industry in graphics and what the game feels like and the amazing action we can bring. The Mediterranean theater itself has more variety than we have ever delivered before, with the beautiful hills of Italy and the deserts of North Africa.”

The tactical battles can have real moments of heroism, as you see breakthroughs or disasters unfold before you.

“Humanizing the battlefield is something that we feel really sets us apart from other strategy and RTS games,” Littman said. “There’s a real connection to your units, a connection to the army that you control. We try and tell stories of heroism and camaraderie throughout the franchise, both in the gameplay itself and in the narratives that we tell.” 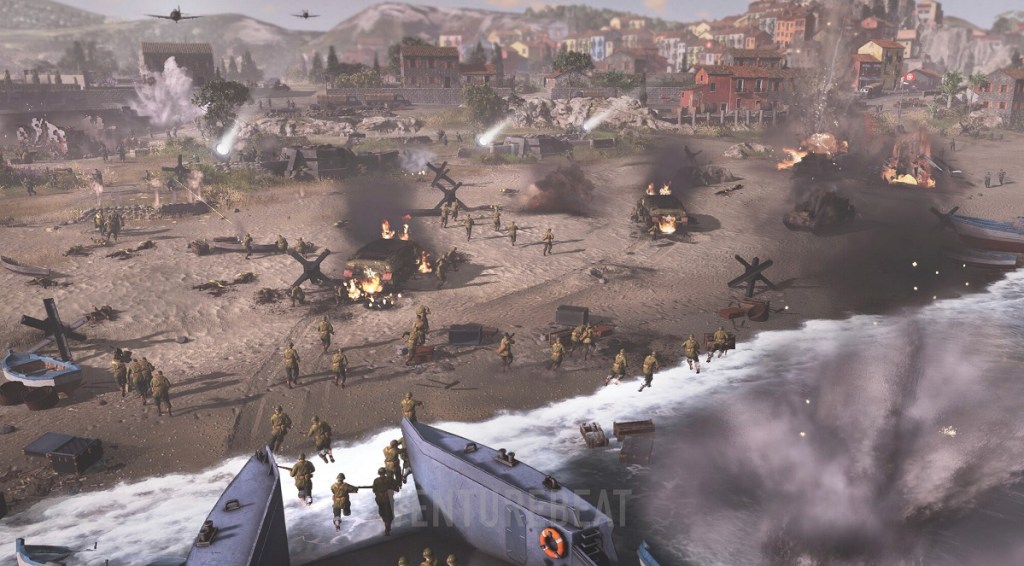 Above: A naval landing in Company of Heroes 3.

I got to play with it during a preview event overnight, and that was good, because I had my game on the wrong graphics setting early on. It turned out that the game was much prettier than I thought, with its overhead 3D view of the Mediterranean battlefields. In the strategic campaign, I started out with the Allies on a beachhead at the city of Naples.

The tutorial guided me through the gameplay, but it was intuitive. You can see the frontline of the campaign with blue indicating the Allied positions and red the Germans. You can control companies of units such as British tanks, the Indian artillery company, and American paratroopers.

Every major decision is in your hands. You get to choose where to spend your resources, resupplying lead units or strengthening the supply lines so they aren’t cut off so easily. You can change the units in the invasion to focus on offshore destroyers or paratroopers as you wish. Those choices determine how much firepower you can bring to battles across air, land, and sea.

Because of these decisions, no two playthroughs on the dynamic campaign map will ever be the same, Littman said.

Company of Heroes 3 is still in development, and it occasionally crashed, but I expect that with a build of a game so early in development. 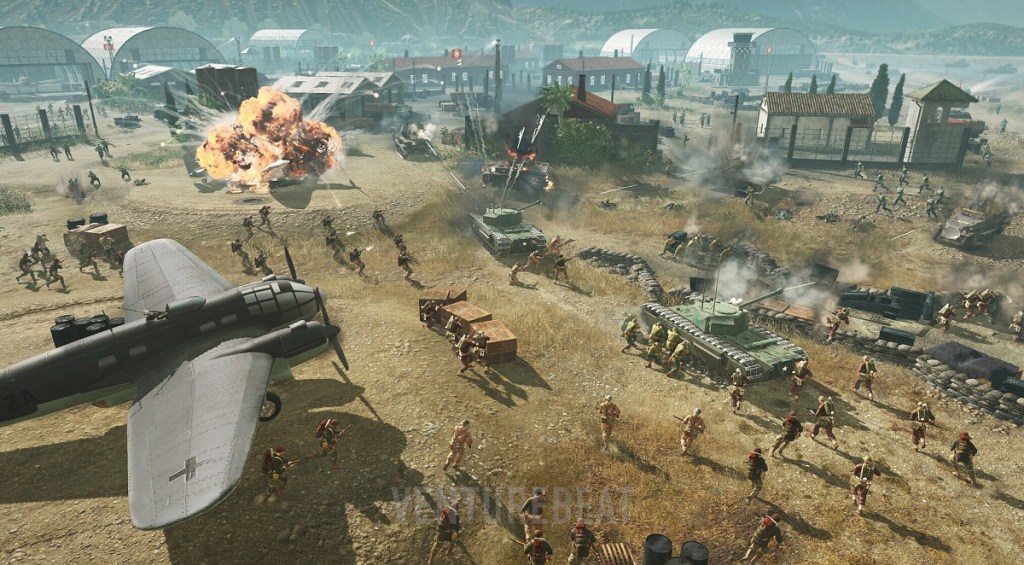 Above: Attacking the airfield in Company of Heroes 3.

The campaign quickly came to a head at the Pomigliano Airfield, which provided the Germans with airpower that was threatening the Allied beachhead. I attacked it with a tank company reinforced with medical and other support units.

In the tactical battles, you have to take over key control points on the map, without losing any yourself (this has long been a hallmark of Company of Heroes). You can take an ammo point and gain more ammo resources, or take over a fuel point to get more gas for vehicles. You start out with a few tents that can build your different units, and you have to keep queuing up the reinforcements to get a steady supply. You can build up large forces, but if you don’t spread out and take a lot of control points, you won’t get many resources to build units. And, as you might expect, just about every control point has a German ambush waiting for you.

You have a lot of choices in the squads that you field. You can have rifle units that have the most soldiers, or you can make a lot of smaller machine-gun units, or get fancy with mortar teams, anti-tank guns, or vehicles. Of course, the German armor is often far better than yours, and in the airfield battle, I had a chance to take over a German antiaircraft vehicle and turn the tables.

Relic’s proprietary Essence Engine runs Company of Heroes 3. That means the 3D tactical battles look amazing even though you view the action from above. You can see an individual soldier make a heroic grenade toss as your squads try to take a machine gun nest. The animations of fire, sand, and smoke also look realistic. 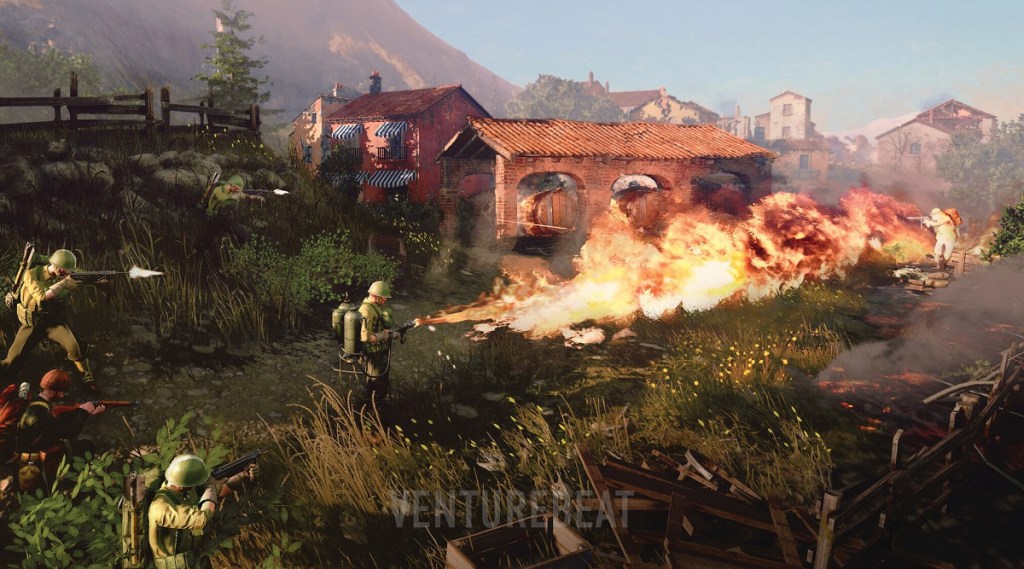 Above: Sappers with flamethrowers can be devastating in Company of Heroes 3.

The soldiers move about in squads, but when it comes to the artistry behind each trooper, there is a lot of fidelity and personality behind each one, said art director Tristan Brett. The churches look beautiful, as they did in Italy at the time, and you feel bad about blowing them up, Brett said.

It looked like an easy enough task to take over an airfield with wide open spaces, but it was a mess. I had to tackle the battle multiple times before I figured out just how large the enemy forces were, as they were hidden by the “fog of war,” meaning I could only see what my troops could see.

Early on, I had a chance to use a single artillery strike against a German-held building. It went down in destruction, and I wiped out an entire squad. That kind of destructible environment is something new for the series.

I learned that combat can be pretty lethal. When two mismatched squads meet up in battle, the one with more firepower and cover will win quite easily. You don’t have a stalemate that lasts for a long time. But if your soldiers are caught off guard, their morale will plummet fast. 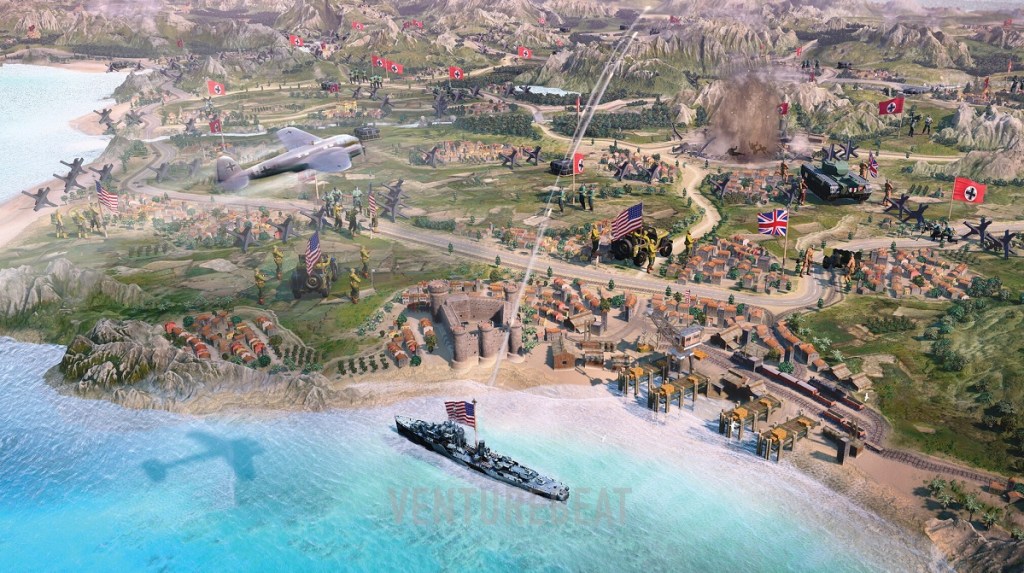 Above: This U.S. destroyer shells the Germans from the shore of Naples.

Once I captured the airbase, I had more resources I could bring in via air in addition to the reinforcements I could draw on at the port of Naples. I got so caught up in the campaign that I focused on playing at the high level, rather than moving into the tactical battles.

The units are quite powerful. An artillery assault can wipe out an entire German unit defending a town. With the help of naval destroyers and the airpower, you can punch holes in the German lines and rush through. You get a rush from using your combined forces to dislodge an entrenched enemy so you don’t have to fight a hairy tactical battle. The animations that went with the air bombardments and the naval shelling were first-rate.

The sound is good, with classical music and the ambient sound of birds and church bells giving you a feeling of immersion.

I tried a couple of different thrusts with multiple tries at the campaign. At first, I launched a spearhead directly at Monte Cassino. I realized that choosing the right reinforcements is critical, and I had to make sure that each part of the offensive front was well-supplied. I could have used more aircraft to resupply my teams, if I had built more cargo aircraft. But early on I focused on building dive bombers to take out German armor.

Some things weren’t ready yet. The Germans blew up multiple bridges, but my engineering teams couldn’t fix them, closing off that avenue of advance. In the campaign, you’ll have options like dropping paratroopers or doing naval landings to get around these barriers.

I got close to Monte Cassino with my lead units toward the end of my play session. I was advised to send a recon flight overhead to see what I was up against, but I hadn’t built any recon aircraft that was nearby. Another adviser suggested I send in partisans to spy on the location. But in the name of speed I marched in blind and got ambushed a couple of times at the town of Camino. By that time, my tank company had been pretty ground down, and I didn’t have enough reinforcements. So I had to halt within sight of the prize.

On a second campaign, I headed south to liberate Italian partisans so I could get them on my side, but the German resistance there was bigger than I thought. For much of the campaign, I felt like the resources were just trickling in. I had resources to buy detachments such as a rifle unit or medical unit, but I couldn’t purchase big companies with the available resources. 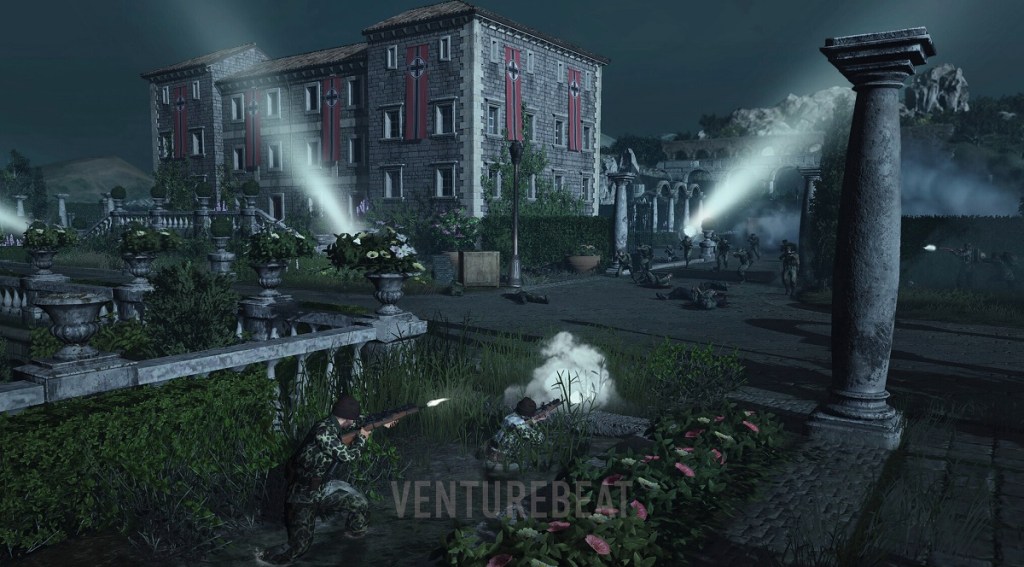 Above: Night graphics look awesome in Company of Heroes 3

I felt like I was lost in the strategy and tactics of World War II. This is my kind of game as a history buff and a thinking gamer. I felt like I was rewriting history and creating my own story as I took one German stronghold after another. That’s the whole point of games like Company of Heroes 3 — to make you feel like you’re reliving or making history.

The game felt pretty polished, and the part of it I saw seemed quite massive. But I’m pretty sure there’s a lot more to see, which speaks to the ambition of the game developers. Bravo.