Magic: The Gathering‘s latest set explores the Forgotten Realms of Faerûn, and one can argue that it dives into the general lore of Dungeons & Dragons as well. How else would you explain the presence of cards such as the Eye and Hand of Vecna and the archmage Mordenkainen other than the Adventures in the Forgotten Realms set is also a celebration of all things D&D as well?

In a press briefing for Fizban’s Treasury of Dragons on Monday, Wizards of the Coast senior game designer James Wyatt talked about his recent work on Magic‘s Forgotten Realms set and this new book. He’s worked on both Dungeons & Dragons and Magic: The Gathering during his 21 years at Wizards of the Coast (he wrote two of my favorite D&D books, the 3rd Edition City of the Spider Queen and Draconomicon tomes).

D&D continues to grow, riding its best sales year ever in 2020. And that momentum continues to carry over to folks watching actual play shows and streams such as Critical Role’s Exandria Unlimited. Measurement firm StreamElements reports that June was an impressive leap for D&D programming, with 3.8 million hours watching in 2021. In June 2020, during the pandemic, the number was 1.4 million hours. The growth between 2020 and 2021 is 167% year-over-year.

Wyatt brought up a fantastic point about granting characters such as Lloth the status of Planeswalker in Magic. In 1978’s Vault of the Drow module, the old TSR first introduced Lloth, the Demon Queen of Spiders. And her webs weaved into a variety of places … and planes.

“As you’re exploring Lloth’s layer in the Abyss, this multilayered web, you get to the top layer of web, and it’s full of doors leading to other worlds with material planes,” Wyatt said. “So, she absolutely is whatever a Planeswalker is. She absolutely is a figure who is interested in conquering multiple worlds and extending her level of influence all across the material planes. She’s just perfect in that role.

“And one of the things I love about that adventure … that adventure was the first time that my eyes were open to the possibility that not just the world that I’m playing D&D in, but all these other worlds, could exist.”

And why are those portals important? At the time, D&D‘s published worlds were basically just Blackmoor and Greyhawk. The Vault’s story takes place in Greyhawk. While the idea that folks would be making their own worlds existed, along with various planes of existence (including multiple material places), the idea of Lloth visiting other planes and lording over the drow of many worlds was something novel for many players.

And all of this ties into Fizban’s Treasury of Dragons as well. (To learn more about this book and D&D’s other product announcements, tune into D&D Live beginning noon Pacific on Saturday on G4TV’s Twitch channel). Above: The alternative cover for Fizban’s Treasury of Dragons would look great on any shelf.

TSR (and later Wizards of the Coast) would play with this idea many times over the years. Paladine and Takhisis of Dragonlance fame? They’re aspects of Bahamut, the god of metallic dragons, and Tiamat, the goddess of evil dragons.

One of today’s product announcements is Fizban’s Treasury of Dragons. This new D&D supplement dives into all things draconic, and its authors are Wyatt (he’s kinda Wizards’ dragonlord at this point) and Amy Vorpahl. It debuts October 19. It brings back gem dragons, the wyrms who take after precious stones such as emerald and sapphire and have psionic powers in addition to their draconic abilities (it adds gem dragonborn, too).

It also introduces the First World, the original home of dragons. Bahamut and Tiamat play a role in its creation … and its destruction. It feels fitting, since the war between the two dragon gods affects numerous world, especially Krynn (the setting for the Dragonlance campaign).

Fizban is another aspect of Paladine on Krynn. In this guise, Paladine is a doddering old wizard who befriends the Heroes of the Lance and helps them (he also has a fondness for casting fireballs). But his kindness and wisdom also serve as a moral compass for the young adventurers in the Dragonlance saga.

Fizban’s Treasury of Dragons also changes how Great Wyrms work in D&D. They’ve always been the oldest and most powerful of dragons, often more than 1,200 years old. But now, their roots go beyond the material plane.

“We have a couple of stat blocks in the bestiary chapter that are Great Wyrms, dragons that have advanced beyond the power of even an ancient dragon in the Monster Manual. These use the mythic monster technology that we debuted in Mythic Odysseys of Theros to be really exceptionally challenging encounters on their own — almost like fighting two monsters back-to-back, both of which are at challenge ratings above 20,” Wyatt said. “They are tremendous forces of magic in nature, that move the world around them and wreak havoc wherever they go. Or, you know, this is a silver one, so it’s probably nice, right?”

But now, they can draw on the power of their “echoes,” their draconic counterparts in other places in the D&D multiverse, giving them some planeswalker flavor of their own.

“There’s an idea of running through this book that every dragon has echoes of itself on other worlds of the Material plane,” Wyatt said, noting that this isn’t a Dragonlance book. “This really is a book about dragons in every D&D world, and not just any D&D world, but every D&D world.

“Dragons have these echoes that link them through some mysterious means to dragon some other worlds. And the idea behind the Great Wyrm is that, at least to some extent, some of their enhanced power comes from combining the power of multiple echoes into a single dragon. So dragons that we know from legends, like Ashardalon, Chronepsis, or Aasterinian, who have been presented as dragon gods in the past sometimes, we’re describing them as these Great Wyrms who have managed to extend their power and influence beyond a single world and combine the power of multiple echoes to become incredibly powerful creatures.” 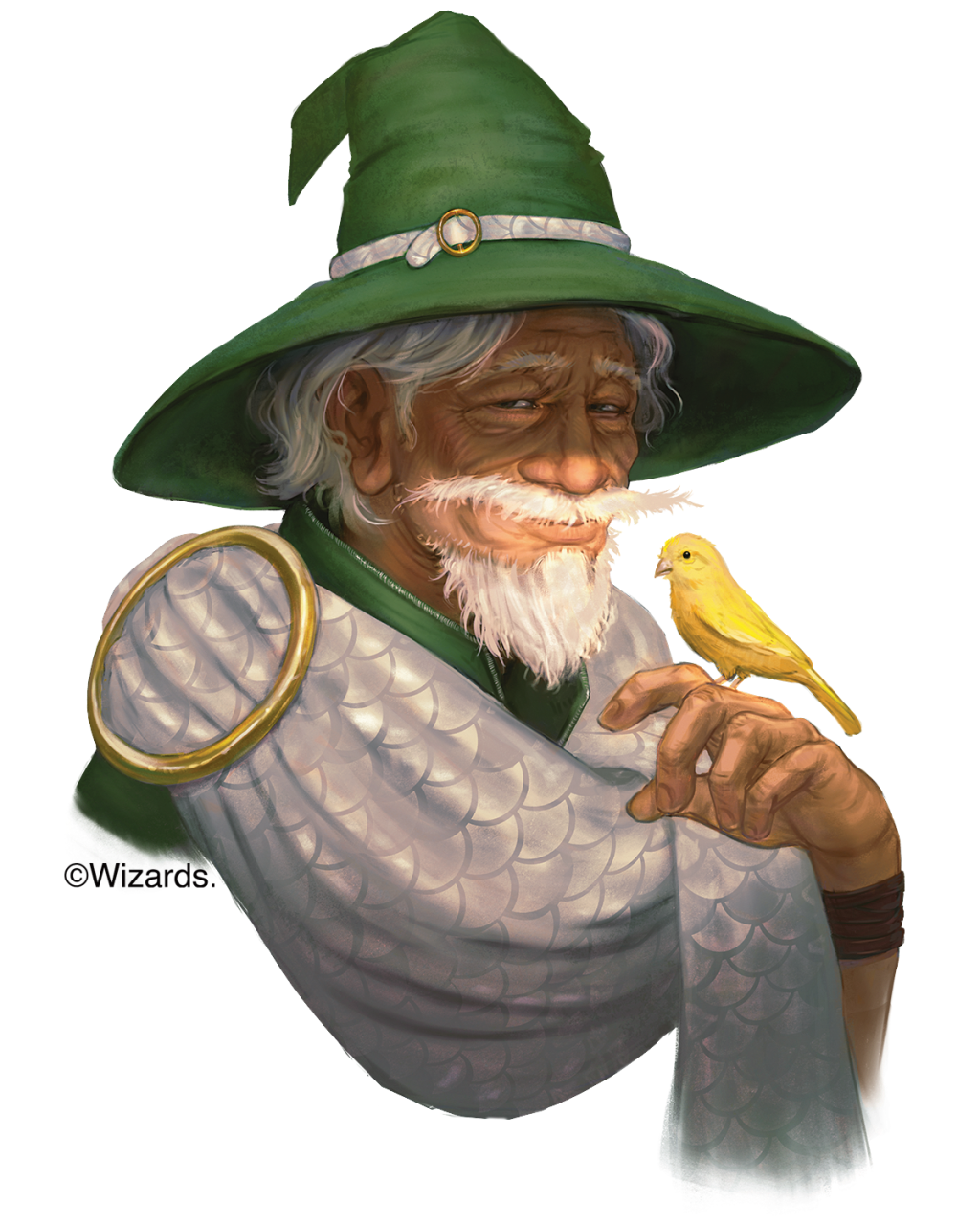 Above: Fizban the Fabulous is fond of his friend, a gold dragon disguised as a bird. And fireballs. He loves his fireballs.

How does this work? Wyatt explains: “A given dragon in the Forgotten Realms might have an echo on the World of Greyhawk, and develop that sense of dragonsight in order to be able to communicate, in a waking dream sort of way, with their echo in another world, and then eventually, perhaps, combine that power into a single being.”

And all of this also ties into how dragons have power in the lairs, their surroundings, and how even their treasure hordes develop magical energies.

What’s interesting here, from my perspective, is that with Fizban’s and The Wild Beyond the Witchlight, we’re getting more into traveling the planes and exploring other worlds in the 5th Edition of Dungeons & Dragons. Bahamut also appears in Adventures in the Forgotten Realms as a planeswalker, which fits quite well with this idea of dragons reaching out into the planes.

I have no inside information here, but by expanding the multiverse and talking about how various beings draw power and explore it, I can’t help but think that one of the two old campaigns that D&D executive producer Ray Winninger teased is going to be connected to either Planescape or Spelljammer.