Xsolla is launching a game investment platform for indie games, and the payments platform will invest as much as $40 million alongside other accredited investors.

A lot of money is out there, with as many as 100 game-focused venture funds operating around the world. But those funds are often targeting the bigger fish — not the indie game makers who really need both the money and the control of their own destinies, said Xsolla president Chris Hewish in an interview with GamesBeat.

While investors often try to gain control of a game studio or its creations during negotiations, Xsolla will try to keep the interests of the indies aligned with its own interests by financing individual projects and not controlling them. The Xsolla Game Investment Platform will share in the revenue of the projects, but not take ownership of the intellectual property or the company, Hewish said.

Xsolla handles more than 700 different payment systems around the world. And it works with more than 1,500 game companies and 2,000 games. While other payment companies focus on larger industries, Xsolla has thrived by focusing mainly on games. That has helped it figure out what developers need to run their businesses and provide the payment and backend services that can make the difference. To date, the company has helped its game partners generate more than $3 billion in revenue across 3,400 games. 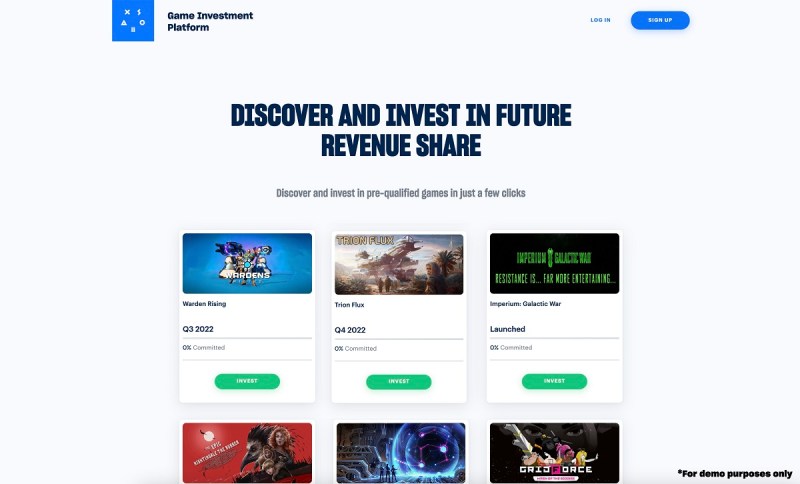 Above: The Xsolla Game Investment Platform.

This is happening amid a boom in gaming, as the pandemic motivated a lot of people to play games to socially connect with friends during the lockdown and to bring some joy back into their lives. Newzoo said the gaming industry hit $174.9 billion in 2020, with smaller independent developers making up a growing and important part of the sector.

Yet available capital to back this segment of the industry is fragmented, which makes it difficult for independent developers to find the right investor to support their efforts.

The need is there because most indie devs don’t know where to get money, said Hewish.

“This is presenting a real investment opportunity for indie devs,” said Hewish. “We have been working on this for quite a while. We have spoken with other investment platforms to understand the learnings that have come from those.”

Hewish said often that even if an indie dev gets the attention of an investor, they may try to gain control of the indie’s intellectual property rights. That doesn’t serve the indie’s interests, Hewish said. In this case, the investors don’t get a share of the indie game company. Rather, they get a share of the revenues. That’s why it’s considered more like a fund for project financing, rather than venture investing.

The revenue split between the investors and the developers will be negotiated with each deal.

On the flip side, most investors also don’t know where or how to find indie game developers. They need to find a lot of them in order to spread out the risk. Xsolla tries to match these people together through its separate practice, dubbed Funding Club. 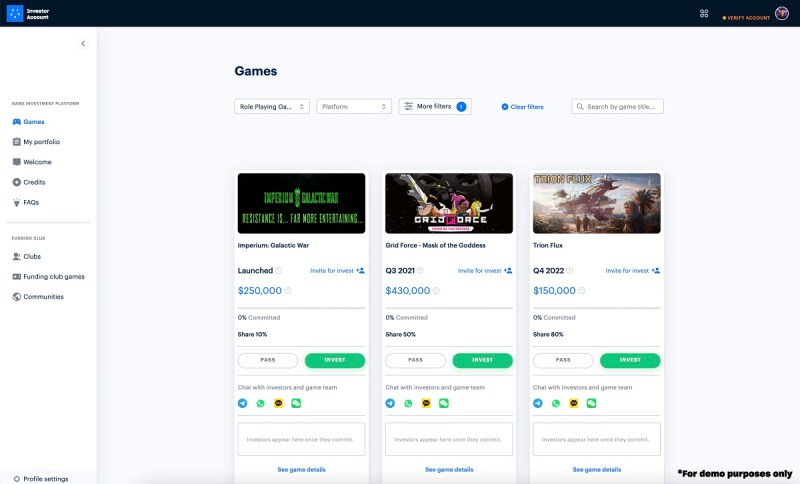 Above: Xsolla will invest up to $40 million in game projects.

If an investor wants to join a project, it can contribute a certain amount of money and Xsolla can contribute its own amount. Hewish said that if one investor put $10 million into a project, then Xsolla may match that with a $4 million investment. On average, $1 million might be invested in a game, and the minimum will be $5,000.

Six games are already on the platform, and Hewish said the company is talking with potential investors. He said Xsolla is looking at accredited investors, venture funds, family offices, and other investors.

Xsolla is handling the management of the investments with its funding team. It has other related activities such as its Joystick Fund, which is operated by its founder as a separate traditional venture capital fund, as well as the aforementioned Funding Club, which is a matchmaking service. Aleksandr Agapitov started the company in 2005 to provide resources and tools for smaller developers who needed to access the same kind of services that big game publishers could provide.

“Spreading the risk out is a great theme across the board here,” Hewish said.

Over time, Hewish said he hopes that over the years, more than 1,000 games could be funded at $1 million each. That would be a big impact.