The adventure game Road 96 debuts today as a test of your border politics. It also shows how well a narrative story blends with a procedural game that can go on and on like the roads cutting through the landscape of this experience.

The title from Montpellier, France-based DigixArt is a blend of Route 66 style imagery, the political atmosphere of Donald Trump’s anti-terrorist and anti-immigrant agenda, and the personal travails of any runaway teen who makes a run for the border.

It’s is available today on multiple stores for $20 on the PC — on Steam, GOG, and the Epic Games Store — and the Nintendo Switch. I played it on Steam.

Yoan Fanise, the cofounder of DigixArt and co-creator of games such as Valiant Hearts and 11-11 Memories Retold, said in an earlier email to GamesBeat that Road 96 is an evolving story-driven adventure inspired by filmmakers Quentin Tarantino, The Coen Brothers, and Bong Joon-ho. He and his wife, Anne-Laure Fanise, created their studio to achieve creative freedom, and this game is a reflection of that goal.

And Yoan Fanise is also not afraid to say that it’s a political game that, while fictional, gets you thinking about current events. This game forces players to make tough choices when it comes to fighting tyranny or escaping from it. The tyrant in this case is the Trump-like Tryak, and his accomplice is the Fox News-style anchorwoman Sonya of “GNN.”

The execution on this vision is mixed, but it’s mostly good. I liked the basic humanity of the characters who are instilled with humor, warmth, and kindness — as well as the villains who feel all too familiar as the sort of people making news these days. Combine these with the beautiful landscape art and the easy-going music and you get both idyllic and scary moments during a desperate journey for freedom. One moment you’re hitchhiking along a road with a beautiful view, and the next moment you’re trying to escape from a car where the creepy driver keeps auto-locking the doors. I’m glad that the game doesn’t idolize the hitchhiking life.

Above: You can play many different characters in Road 96.

In Road 96, you play as a teen who is separated from your parents. You’re on the run for the border, attempting to escape the totalitarian grip of Tyrak. You hear tales of the opposition, a group of revolutionaries called the Black Brigades, who reportedly caused hundreds of people to die by blowing up the top of a mountain and causing an avalanche.

You only have so much energy and money, and you have to make it more than a thousand miles to the border. The road is dangerous, but it’s also full of characters. Some you can trust. Some you can’t. As a stranded teen, you often have to put yourself at the mercy of strangers. I tried this many different ways, and I made it across the border three times, died or got caught three times, and made a sacrifice once.

There are many different roads you can take to the border, and these routes can generate procedurally. But you always wind up on Road 96 at the same border crossing in the mountains, with different options available for how you can make the final crossing. Sometimes you simply need money to bribe your way past the border control guards. You also need to keep your energy up through rest, eating, or help from strangers.

What I liked about this is how it made me feel like a vulnerable person crossing the border, trying to do no harm but not always succeeding in preventing it depending on the level my character’s desperation. 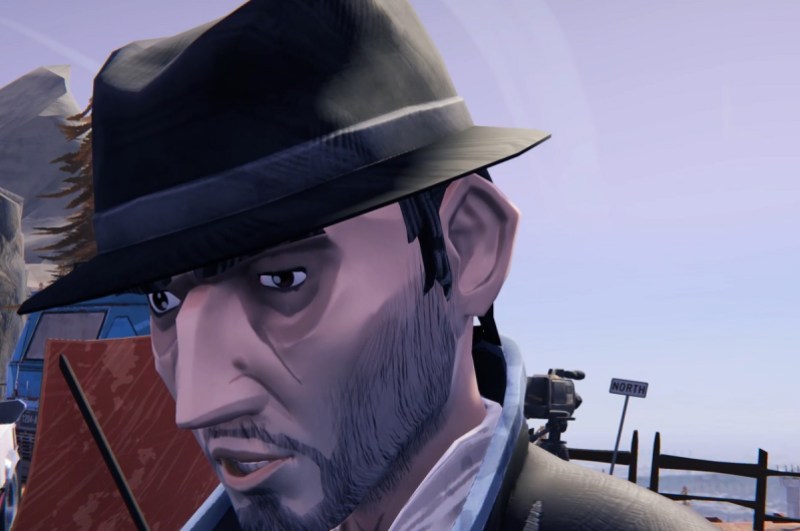 Above: Will you trust Jarod, a the creepy taxi driver in Road 96?

Each scene unfolds like a puzzle. You have to find different objects hidden in the landscape of a gas station. If you’re lucky, you might find the key to a car that you can steal. So it always pays off to search exhaustively. Other choices are moral, like whether you should help some hoodlums rob a business.

The puzzles aren’t that complex. I thought some of them were mundane, like tracing a cable from one location to another. But performing that task was a hoot since I had to shoot a nail gun into the ceiling to knock out some boards. Other decisions carry more gravity, like deciding whether to participate in a violent revolution.

I also enjoyed being on the sidecar of a motorcycle and leaning into the turns so that I could avoid the oncoming trucks or the slow-moving cars in my lane. These moments of interactive agency are fun, but they’re too infrequent in between moments when you’re just searching for the next thing to find in the landscape or the next dialogue prompt to click in a conversation with an NPC.

Along the way, you pick up more skills like picking locks or hacking networks. 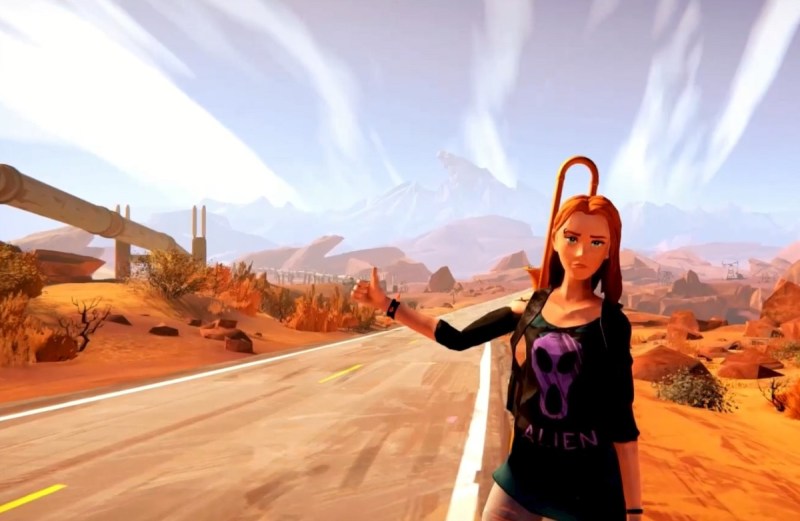 Above: Hitchhiking is sometimes your only choice in Road 96.

Road 96 features a teen who is separated from her parents and is fleeing Petria, a fictional country that looks a lot like the Southwestern United States. The story depicts living in a society that is collapsing economically, where the only option for the young generation is to flee while acting to cause change.

If you think that this is purely an allegory that criticizes the Trump era, you can buy into that narrative. But Fanise said that the game experience is fictional and that it could be interpreted to describe the experience of many different countries. It asks you to take a stand on many kinds of matters. Should you trust a stranger enough to take a nap in the car? Should you hitchhike? Is it OK to steal from others so that you can buy your way to safety? Do you want to leave money behind to help others escape?

The game records these choices and directs you to a particular outcome. But it doesn’t judge you for the decisions you make.

Road 96 has some diversions, like minigames where you play air hockey in a bar or gamble your money as you try to track a ball as a scammer shuffles three cups around. It has some wonderful soundtracks that you can collect along the way and play as you’re cruising down the road.

Above: There are beautiful scenes in Road 96.

There are some flaws. It crashed on me four times. And each time, this set me back in the story. Once, it reset my progress so far that the restored game put me before a big story branch, and since it was procedural, there was no way to get back to it.

The developers also seemed to run out of artists. You see some of the same nonplayer characters (NPCs) over and over. It’s OK to see the characters from the main cast repeatedly, as their narrative keeps progressing. But it’s distracting to see the same bar customers show up again and again. That plants a little seed in your head that maybe you’ve been playing this procedural game for a little too long.

It’s a big game with some beautiful moments and some amazing artwork, but sometimes it’s clear the indie team wasn’t big enough to give you a truly open world. 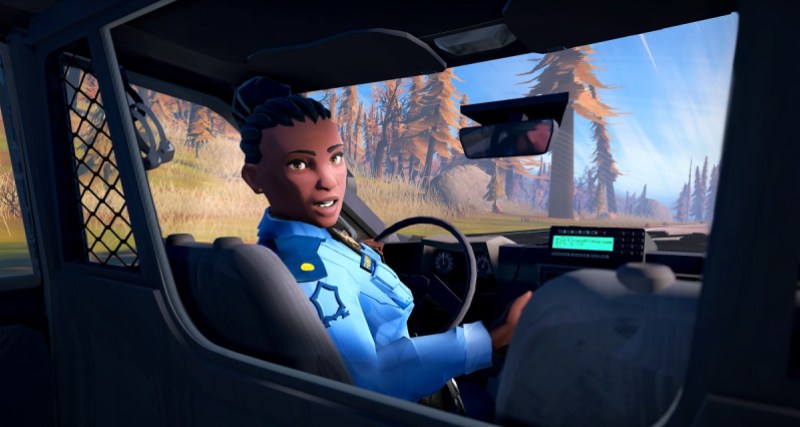 One of the great things about the game is that you can keep on playing it until you get through the storylines of all of the main characters. The game is replayable to the point where you can experiment with different kinds of pro-revolutionary or pro-moderate behaviors. But it doesn’t judge you on the choices you make. It only makes clear that your choices matter, and your road to hell can be paved with good intentions.

I also like how you grow attached to both the characters you play and those you run into on the open road. As you progress, you can see those characters from different vantages and find that your first impressions of them were wrong.

I like premise of Road 96. It sets you up for endless adventures on the road, where each situation can either get you miles further toward your goal or thrown into the slammer … or worse. While you’re vulnerable, your destiny is in your hands.

Road 96 is out now on the Nintendo Switch and on the PC via Steam, GOG, and the Epic Games Store. The publisher sent GamesBeat an a Steam code for the purposes of this review.