Sledgehammer Games revealed the first details of the multiplayer for this fall’s Call of Duty: Vanguard game.

The multiplayer mode is always key to keeping the fans in the game for a long time, and Vanguard’s version will be different from the more modern fighting and weapons that we saw in the past couple of years with Modern Warfare and Cold War. Yes, it’s back to WWII, which will feel heroic, intense, and boring (because we’ve played so many WWII games) all at the same time.

Vanguard is scheduled for release on PC via Battle.net and PlayStation and Xbox consoles starting November 5.

Vanguard will also have a Zombies crossover and a new map coming later this year in Call of Duty: Warzone,  the free-to-play  battle royale, and will be integrated with Vanguard.  The game itself will span four different fighting theaters of WWII. The game uses a version of the Call of Duty: Modern Warfare game engine for its realistic graphics.

I enjoyed my time playing Champion Hill and the multiplayer mode, but honestly, I haven’t seen enough yet to come to some bigger conclusions about this game in comparison to rivals such as Battlefield 2042 and other big games coming this fall. Call of Duty has sold more than 400 million copies to date, and it’s always the biggest game of the year, but we’ll see how this one goes in a unique competitive year where Electronic Arts is launching its new Battlefield game and Activision Blizzard itself is under investigation for sexual discrimination.

We’ll see if either of those things will affect whether players opt to buy this game or not. But on the small tactical level here, I have some concerns, as I’ve explained below with the excessive smoke clouding visibility, as well as some positive vibes from player the multiplayer beta. I’m looking forward to playing more of it in the days ahead. 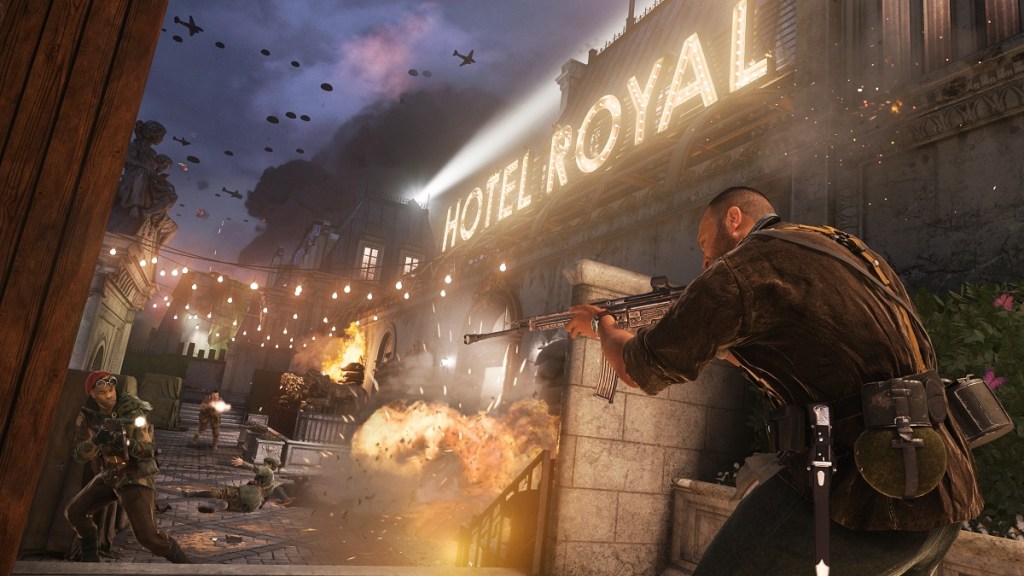 Above: Fighting in the Hotel Royal in Call of Duty: Vanguard multiplayer with Australian operator Lucas Riggs.

On launch day, the game will have 20 multiplayer maps including 16 core maps. The battle types include tactical with 6v6 human players, assault with 20 to 48 players, and Blitz with lots of (unspecified) players. One of the features is “tactical destruction,” where you can destroy wooden barriers or shoot through them, much like you have been able to do in the rival Battlefield series.

In addition to classic game modes such as Team Deathmatch, Kill Confirmed, Domination, Search & Destroy, Vanguard will introduce Patrol, an new objective-based mode featuring a scoring zone in constant motion. I played that mode in my play session.

Also new to Vanguard is Champion Hill, a mode that features a series of tournament-style head-to-head matches. Gunsmith, which lets you customize your guns and loadout, will now feature unrestricted attachments, allowing up to 10 on certain weapons. This can lead to thousands of additional possibilities for every combat scenario and playstyle.

The new Clan system will feature bespoke progression, emblems and Battle Pass-related rewards unlocked for your entire group. On PC, Vanguard will have an uncapped framerate, a bunch of customizable settings and keybinds, and ultrawide and multimonitor support. Features include options to reduce motion sickness, improve text readability, ease-of-use settings, and work to reduce input latency to help you improve reaction time in terms of milliseconds.

Treyarch is working on the Zombies mode, while Raven Studios leading development of the brand-new Call of Duty: Warzone Pacific map coming this year . It will feature a new PC anti-cheat system for the entire Warzone experience. I’ve seen first-hand how cheating has been ruining a lot of Warzone matches, and Raven has been periodically banning tens of thousands of accounts. It shares the same tech as Vanguard for seamless weapons integration.

I enjoyed playing on a map with a big building called Hotel Royal, where it was a constant shooting fest with lots of explosions and destruction in a luxury hotel.

Greg Reisdorf, the multiplayer creative director for Sledgehammer Games, said in the presentation that one of the new features is blind fire.

When you go up to an edge barrier, like a doorway or a table, you can mount your gun and start firing with a stable foundation that makes your shots more accurate. But you can swivel back and forth on that mount, and you can also seamlessly shift to blind fire, where you duck below the cover and keep firing at targets, spraying bullets in a blind fashion over the edge. 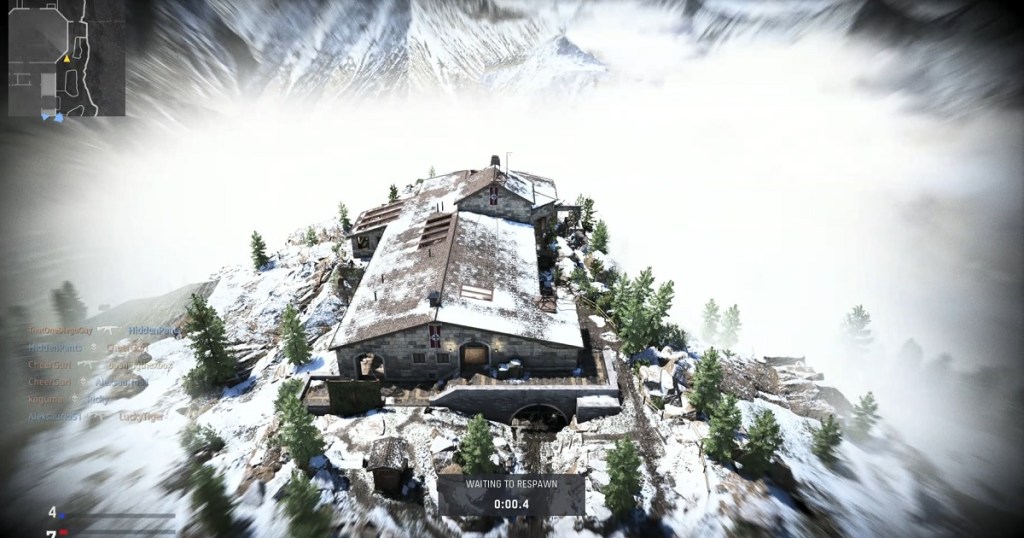 Above: The Eagle’s Nest from above in Call of Duty: Vanguard multiplayer.

I think the most interesting map is Eagle’s Nest, which was Hitler’s secret gathering place on the cliffs overlooking Berchtesgaden in Southern Germany. It’s a big stone building on a mountaintop. As far as I saw, the game doesn’t have Nazi swastikas. Rather, it has iron cross symbols on Nazi-style banners, as a kind of compromise on modern sensibilities about the swastika. There wasn’t any actual fighting at the Eagle’s Nest during the war, though the Allies tried to bomb it.

The map itself is really small, with different lanes for running in the middle, on the sides, and on the exterior of the building. You can run down these lanes and run into enemies head on or try to circle around behind them. It has some doors that you can open or close as well as wooden window shutters that you can shoot through and shatter.

It was on this map encountered one of the bigger tactical problems that concern me. The MG42 throws off a lot of smoke when you shoot it. And when your bullets strike near an enemy, that also produces smoke. That happens if your bullets hit the enemy or around them, whether that is wood or stone. It doesn’t matter what the bullets hit. They always produce smoke. 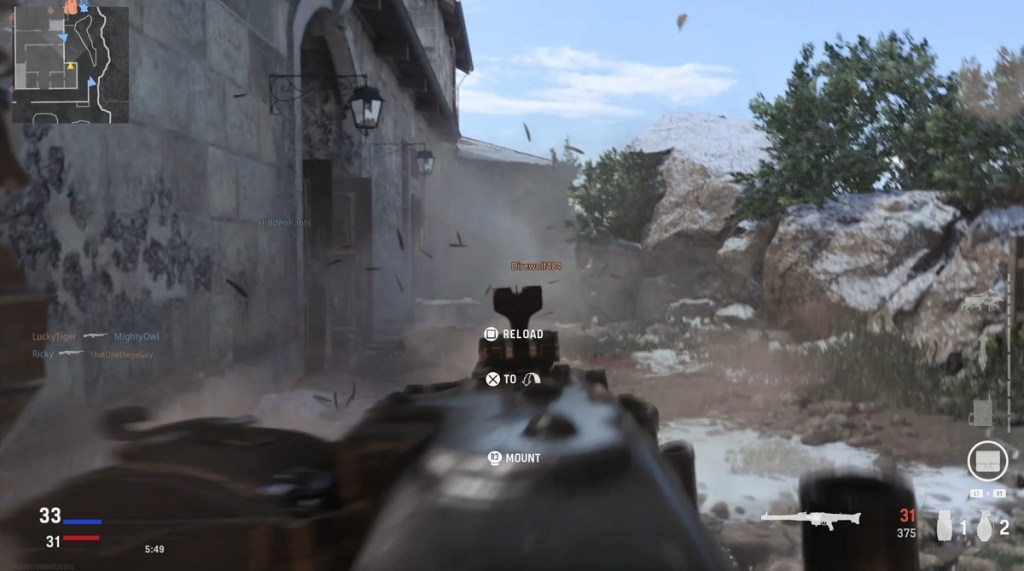 Above: The only way I could see my target through the smoke was via the name tag.

The smoke makes it look and feel realistic, giving you the intensity of real combat. But it creates a problem, as the smoke obscures your view, as you can see repeatedly in the video in this post. Sometimes when I was shooting at an enemy far away, the character was entirely shrouded in smoke and debris. So I actually lost sight of the enemies while still shooting to bring them down.

If my crosshairs went over the enemy’s body, I could sometimes see the red lettering of the enemy’s name, and so I fired at that. But that isn’t realistic at all. I think Sledgehammer needs to fix this so that the smoke isn’t so bad, unless they see this as a way of limiting the power of the MG42. Whatever the reason, I think this is something they need to nerf, as it takes all the fun out of getting an enemy in the crosshairs.

Still, Eagle’s Nest is sure to be a popular map, much like Nuketown has been in previous versions of Call of Duty. I’ll probably play this one repeatedly.

But I hope they reduce the smoke. 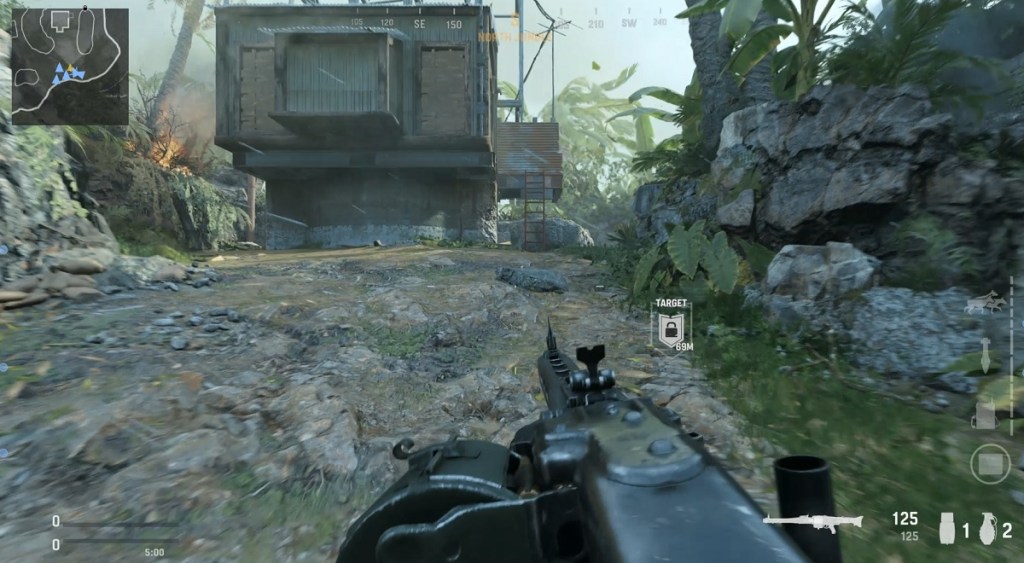 Above: Fighting on Gavutu in Call of Duty: Vanguard multiplayer.

I played two maps the most during my relatively short multiplayer session. The first was Gavutu, an island in the Solomon Islands that played a role in the Pacific war in World War II. The island is only about 600 yards long, but it was the site of a battle between the Japanese and the U.S. Marines. But in this battle, we only fought as various special forces soldiers who are the characters in the singleplayer campaign. So it was a bit weird seeing the Soviet sniper Polina Petrova running around the Pacific island shooting me.

In one of my matches — dubbed Tactical Patrol — on Gavutu, the game froze and I had to start over. I didn’t do so well in this, but that’s par for the course when I’m getting used to a new map in Call of Duty multiplayer.

The map is interesting, with a big cargo ship in the middle and some hills, heavy terrain, and lots of stairs and buildings. You could open windows on the upper floor of a building and smash through wooden barriers or just shoot through them. What’s most interesting was that the Hardpoint — the area you have to control on the map — is a small circle that keeps moving around the map. So the map forced us to move around with the circle. That meant we couldn’t stay in a well-defended area and wait for the enemy to attack. We had to always be on the move.

We had 10 different gun kits to choose from, including Commando, which gives you a STG44 assault rifle, a machine pistol, an MK2 frag grenade, and a No. 69 stun grenade. Each kit is different, and I picked Guerrilla or Carrier with the German MG42 machine gun, which is my favorite light machine gun from Call of Duty: WWII.

I didn’t immediately get a look at the different Scorestreaks, which are rewards when you accumulate a lot of kills. But my enemies kept loosing dogs on me during this match, so clearly that’s one of the bonuses. 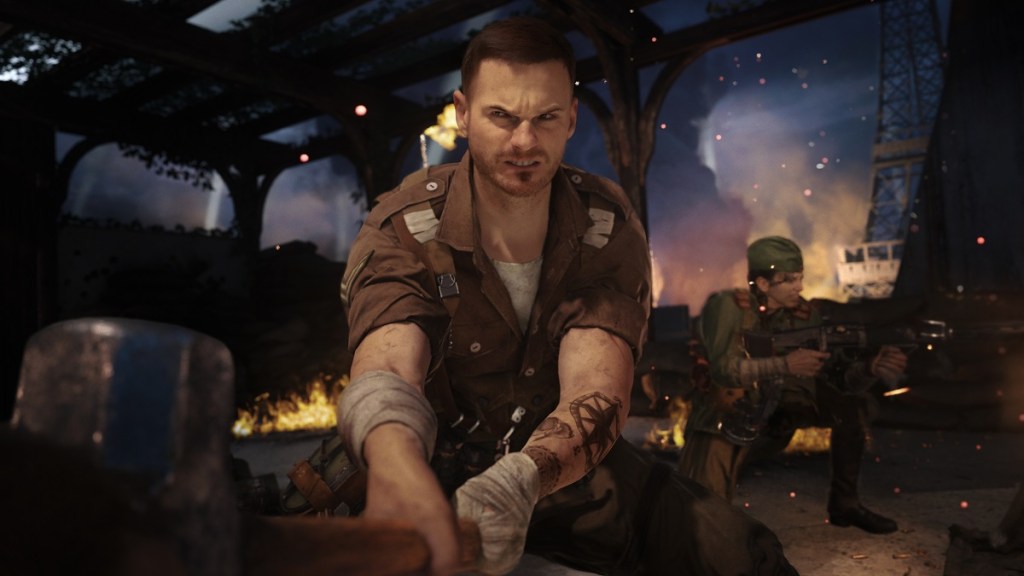 Above: Operators Lucas and Polina in Call of Duty: Vanguard multiplayer.

I enjoyed playing Vanguard’s multiplayer in part because I’m dying for some fresh maps. It felt familiar, like some of the maps I played with 2017’s Call of Duty: WWII. But it was also good to see new modes like the Gavutu battle with the moving Hardpoint. I was able to get to more kills than deaths on each map I played except Gavutu, and so it felt familiar enough to me in terms of being easy to pick up.

The multiplayer reveal comes after the company unveiled a new multiplayer mode dubbed Champion Hill. In that mode, you played in 2v2 or 3v3 matches against other players in a series of mini-tournaments where eight teams could compete against each other until there was just one team standing.