SoftBank led a $680 million funding round for nonfungible token (NFT) fantasy soccer collectible game platform Sorare. The investment values Sorare at $4.3 billion, and it speaks to the confidence investors have in the combination of blockchain games and fantasy sports.

The round is the biggest Series B (second institutional round) for a European game company, and Paris-based Sorare will use the money to acquire new licenses for its NFT products and hire new people.

What’s astounding about this funding is that Sorare at the moment only has 30 employees. Right about now, the developers at Electronic Arts who create FIFA Soccer, the most popular soccer video game in the world, might be wondering what they’re missing out on here when it comes to NFT soccer games.

Thibaut Predhomme, the head of operations at Sorare, said in an interview with GamesBeat that the company will open a U.S. office in the coming months to staff up.

(We’ll be talking about ways for games to grow — including with NFTs — at our GamesBeat Summit Next event on November 9-10).

“It’s really about creating meaningful connections using the cards. The magic happens at the intersection of collectibility and sports,” he said. “It’s based on the real-life performance of the players, and through this game, fans can actually connect with the players and what’s happening in real life.”

Players don’t have to wager money or pay fees to enter competitions. If the soccer star Cristiano Ronaldo scores a goal in real life, he can score in the game and players can earn more points, Predhomme said. Players can buy cards based on their favorite players and teams, and then play with those cards in fantasy soccer competitions.

“At the end of the game week, you win exciting prices like additional NFTs and merchandise,” Predhomme said. 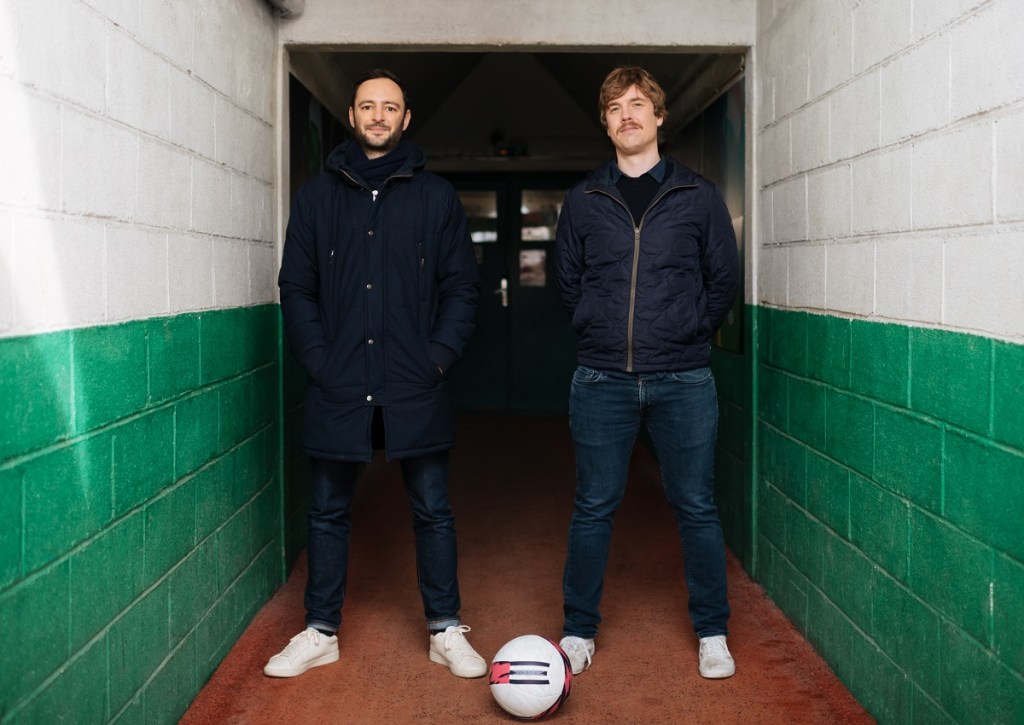 Founded in 2018 by Nicolas Julia and Adrien Montfort, Sorare was created by soccer fans to be “the game within the game.”

Sorare has over 600,000 registered users on the platform and has licensed players from over 180 soccer organizations, including Real Madrid, Liverpool, Juventus, the French and German Football Federation. That’s a huge amount of revenues given the small base of users, and that’s an example of the kind of market potential for the company if it manages to get tens of millions of users, as is possible with many mobile games.

But the money will be useful as the company hits a critical juncture. The company has to scale up and hire high-skilled people in its operations, and it has to secure and protect its intellectual property and bring people on board who can do that, Predhomme said.

The company’s ambition in soccer is to onboard the top 20 soccer leagues globally and the top 50 soccer associations, across not just men’s soccer but also women’s soccer. In particular, the company will bring more North American clubs into the game. 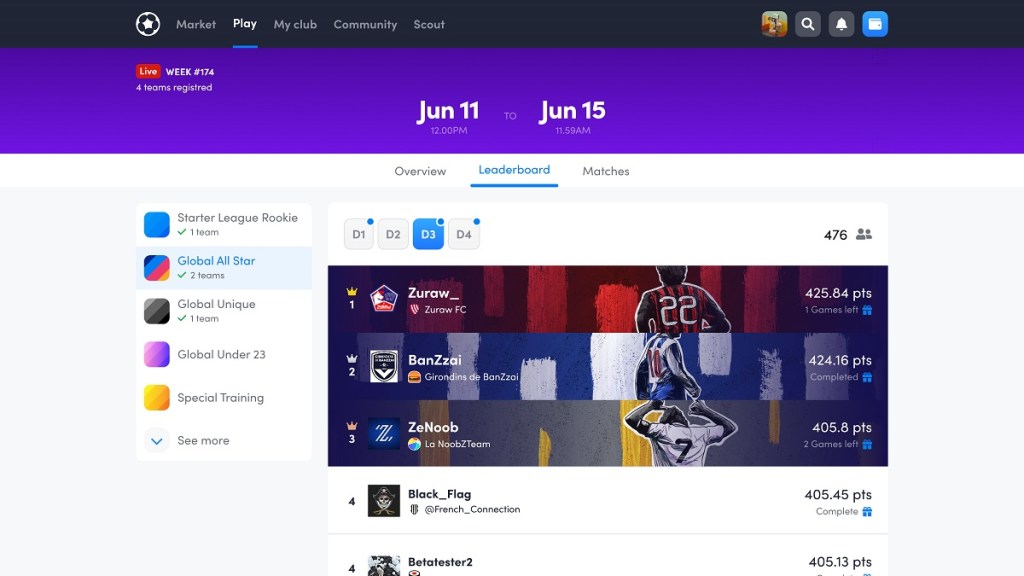 Above: The Sorare gaming arena.

NFTs use the transparent and secure ledger of blockchain to uniquely identify digital items. That means that rare digital items can be sold for higher prices in NFT-based games. While confusing or uninteresting to mainstream gamers,  NFTs have been extremely popular with crypto enthusiasts who are also game fans.

Published by Dapper Labs, NBA Top Shot has surpassed $710 million in sales in just a year. And an NFT digital collage by the artist Beeple sold at Christie’s for $69.3 million. Investors are pouring money into NFTs, and some of those investors are game fans. The weekly revenues for NFTs peaked in May and then crashed, but in August those revenues were bigger than ever. In the first half of the year, $2.5 billion worth of NFTs were sold. 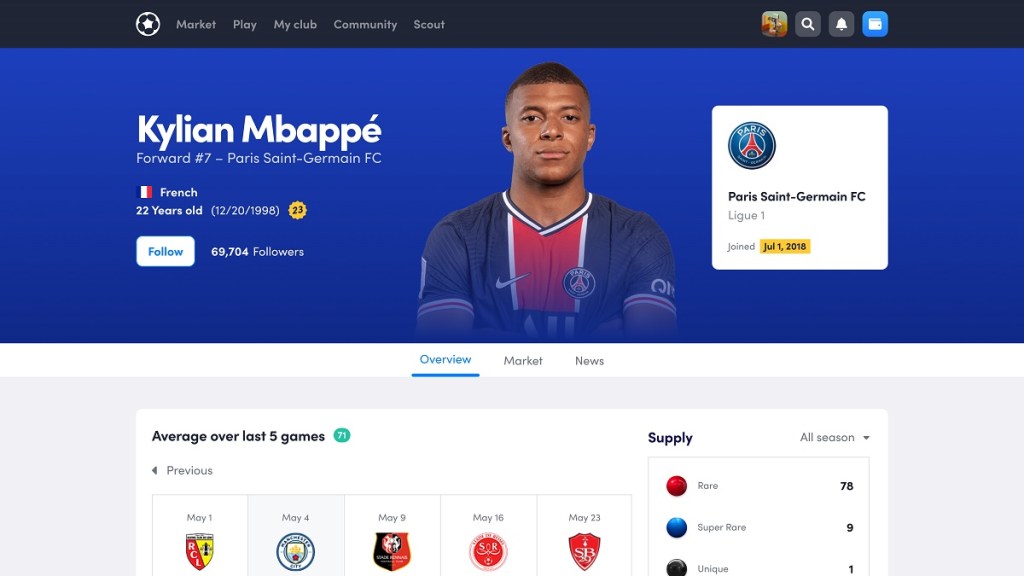 Above: Players can buy NFT collectible cards for soccer stars in Sorare.

Soccer players Gerard Piqué, Antoine Griezmann, Rio Ferdinand and César Azpilicueta also participated in the round. In addition to the investment, Marcelo Claure, CEO of SoftBank Group International and COO of SoftBank Group will join Sorare’s Board of Directors.

The reason the company attracted so much attention is that it operates at the intersection of NFTs, sports cards (a $5 billion market), and global fantasy sports (which is projected to grow to $48 billion by 2027), creating a multi-billion-dollar total addressable market opportunity.

Sorare’s big presence in Asia, Europe, and the Americas was important to SoftBank, Predhomme said.

Sorare will use this investment to rapidly accelerate its mission to build a gaming experience that sets a new standard for how fans worldwide connect to the clubs and players they love, Predhomme said. Sorare will also expand into other sports so that everyone can celebrate their passion and experience the unique world of NFT fantasy sports.

Sorare cards are NFTs, meaning each card is unique, scarce, and its ownership is publicly verifiable via the Ethereum blockchain. It is a secure and transparent model of digital ownership. Through collecting, owning, and trading these limited edition digital collectibles, Sorare is designing a unique game experience where users can truly own their game and build real-world connections.

The game started on top of Ethereum, then it switched to the StarkWare Layer 2 protocol so that it could do speedy transactions for millions of fans and do it in a way that was environmentally sound.

“The user doesn’t really see it as being on the blockchain,” Predhomme said.

One of the differences between the game and other NFT projects is that the NFTs are not the end in themselves. Rather, they’re used to play the game,

Predhomme said the company managed to make a simple product out of something that could have been very complex.

“We have succeeded with NFTs because we have managed to build something simple,” he said. “And we have been able to secure valuable IP for those NFTs through our licensing contracts.”

The future of sports monetization 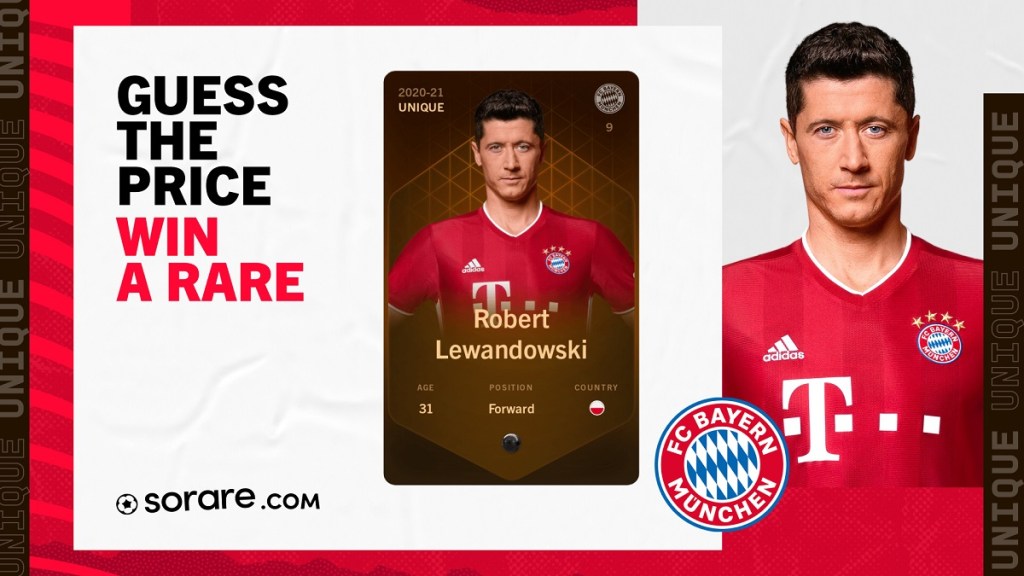 Above: A Sorare card for Robert Lewandowski.

This next-generation gaming experience allows leagues and clubs to expand their international brand by reaching an untapped audience of fans. Sorare is effectively opening up a new traceable and sustainable revenue stream for professional sports organizations globally, Predhomme said.

Sorare hopes to replicate its model in other sports, expand its team by hiring across key roles, and launch ambitious marketing campaigns with partners, athletes, and media companies.

Marcelo Claure, CEO of SoftBank Group International and chief operating officer of SoftBank Group, said in a statement that Sorare is at the intersection of the exciting industries of digital collectibles and fantasy sports. He said it’s evident from Sorare’s growth this year alone that soccer fans around the world have been eagerly waiting for a new kind of trading game.