Apple has unveiled its M1 Pro and M1 Max chips with up to 57 billion transistors for the new MacBook Pro laptops.

In an online event, Apple’s CEO Tim Cook along with other company executives touted the new processors as the heart of the company’s three new models of MacBook Pro laptops.

The new M1 Pro processor has 33.7 billion transistors and a memory bandwidth of 200GB/second. It has ten central processing unit (CPU) cores, including eight high-performance cores. Additionally, it has 16 graphics processing unit (GPU) cores and is built in a five-nanometer manufacturing process. The processor is 70% faster than the M1 with twice as many transistors, according to Johnny Srouji, senior vice president of hardware technologies at Apple. It can also support two external displays. 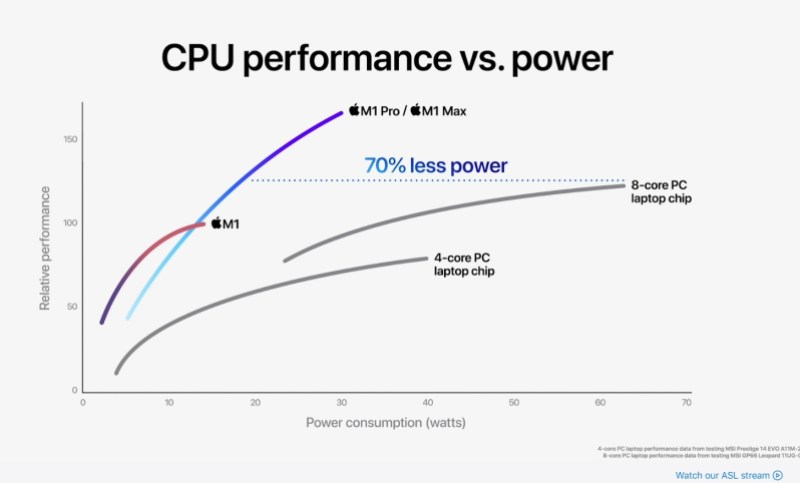 Above: Apple says that M1 Max has 3.5 times the transistor count of rival chips.

The M1 Max, meanwhile, is Apple’s biggest processor ever, with 57 billion transistors. It has 400GB/second memory bandwidth, 64GB of unified memory, a 10-core CPU, and a 32-core GPU. It can support up to four external displays. The M1 Max is also 2.5 times faster than rival laptop graphics on battery power, Apple stated. 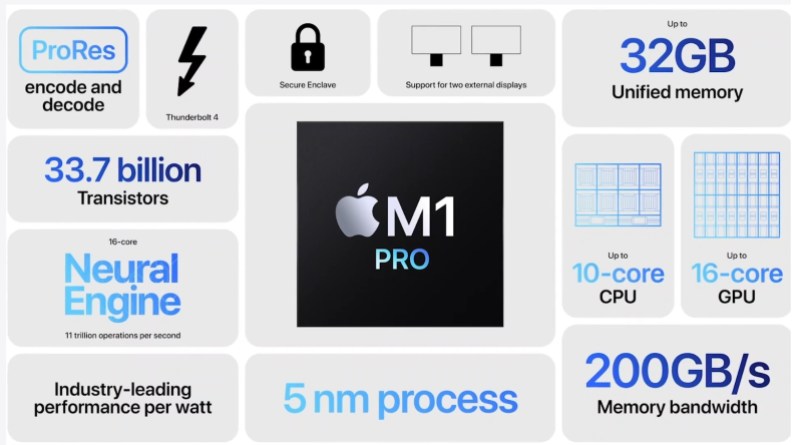 It enables instant wake from sleep mode. Machine learning calculations can perform three times to 20 times faster on applications, Federighi said. And it has up to 70% less power consumption than rival chips.

The new chips have hardware-verified secure boot, runtime anti-exploitation, and fast in-line encryption for better security, Federighi added. Cinema 4D is three times faster on the latest chips. And it means better games are going to run on the latest Apple hardware.

The design of the MacBook Pro has thinner bezels. The mini-LED display has more pixels with 1,600 nits of peak brightness. It can run at 120Hz with ProMotion technology. The MacBook Pro now also has an HDMI port, SD card reader, and MagSafe for magnetic charging.

All of that silicon will enable users to edit 8K video on battery power, Apple said. The company is also touting the device’s two to four times longer battery life than previous models.