Newzoo today released a report with new insights on American gamers. Not only do Americans prefer games over any other leisure activity (though not by a large margin), they also prefer games with puzzle-solving mechanics.

According to research by the Entertainment Software Association, the U.S. gained 13 million gamers of all ages during the pandemic. Newzoo has also predicted that gamers will remain engaged with games even after the pandemic abates.

What are American gamers playing? 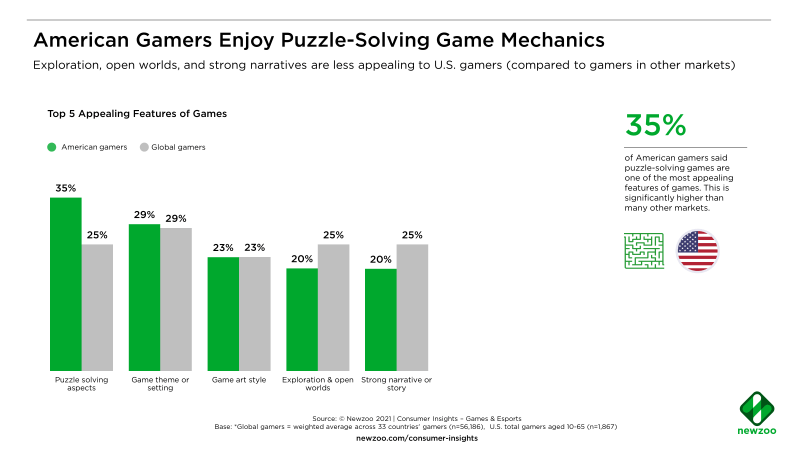 The report also included more information about what kinds of games Americans prefer to play. The respondents were asked what features of games appealed to them the most, with options ranging from “art style” to “theme or setting.”

Newzoo had previously reported that the majority of gamers this year did most of their gaming on mobile, with over 90% of gamers worldwide playing on mobile. Many popular mobile games are puzzle-based. Just look at Candy Crush and all of its clones.

What art and themes do American gamers prefer? 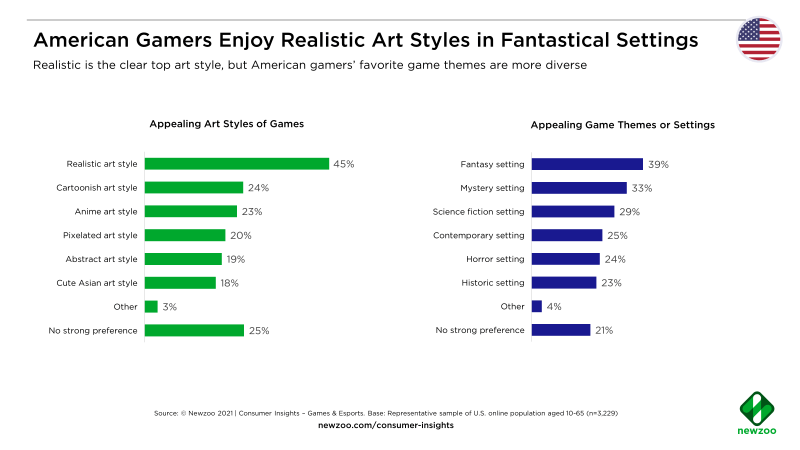 Conversely, when American gamers were asked what kind of art style and setting they prefer, an overwhelming 45% said they favored realistic art styles. The next most popular response was “No strong preference” with 25% of the vote. As for themes and settings, gamers seemed to enjoy fantasy (39%), mystery (33%), and science fiction (29%) for their games.

It’s probably not a surprise, given the responses above, that the top games preferred among American gamers are fairly diverse. A third of gamers said they played one of five franchises in the past six months: Candy Crush (39%), Call of Duty (36%), Mario (35%), Minecraft (32%), and Fortnite (32%).

Finally, the report included a response from American gamers about why they game. 60% of respondents said they play to relax and unwind. 40% said they play to escape everyday life. Given the number of gamers who began gaming during the pandemic, this is probably the least surprising statistic of all.