Intel lost its way. That much was obvious as it struggled to spin up its 10nm manufacturing process. This left the company scrambling — especially in the face of a refocused AMD. But Intel claims it has a plan to build competitive desktop processors once again. It’s an ambitious strategy that uses a hybrid chip design with different cores that are better at specific tasks. Intel is also embracing emerging tech like DDR5 system memory. But the reality is that while many of us obsess about these features, most people want a fast and affordable CPU that just works. That is maybe where Intel is finding itself once again with the Core i9-12900K.

But while I like looking at the nuance of how Intel is trying to compete, I also get a lot out of ignoring those details. Is this new i9 fast or not? The answer to that is an unqualified yes. This is a blazing quick CPU — especially in gaming. That’s thanks to Intel’s incredible single-core performance. But, for once, I think Intel has also delivered a chip that can compete with AMD in many multi-threaded tasks. And that makes it the most compelling offering from processor manufacturer in years.

The best gaming CPU ever

Intel is back with the big claim that it once again has the best gaming CPU in the world. And, as usual, you should take that seriously because Intel’s powerful lawyers would never let anyone at Intel say that unless they were sure. And based on my testing, the chip is comfortably ahead of the best that AMD has to offer.

Once again, that comes down to Intel’s superfast single-threaded performance. The company has always had an edge in this area, and it looks like it is extending its lead with its new 7nm process. The efficiency enabled by this lithography enables the 12900K to easily boost to 5.2GHz (and it was quickly obvious that Intel also padded a ton of overhead into this processor for overclocking).

The final result is a chip that rules for gaming.

In my limited time for testing, I focused on the comparison between the Intel Core i9-12900K and the AMD Ryzen 9 5950X. The 5950X is more expensive and has more threads, but it’s also almost a year older than the Intel processor. If the 12900K should be able to hang with the 5950X.

Here is the Intel rig:

The results were often pretty close. I tested several games, but I was only able to get methodically viable data for Flight Sim, Hitman 3, and WatchDogs: Legion. But those games tell the story. 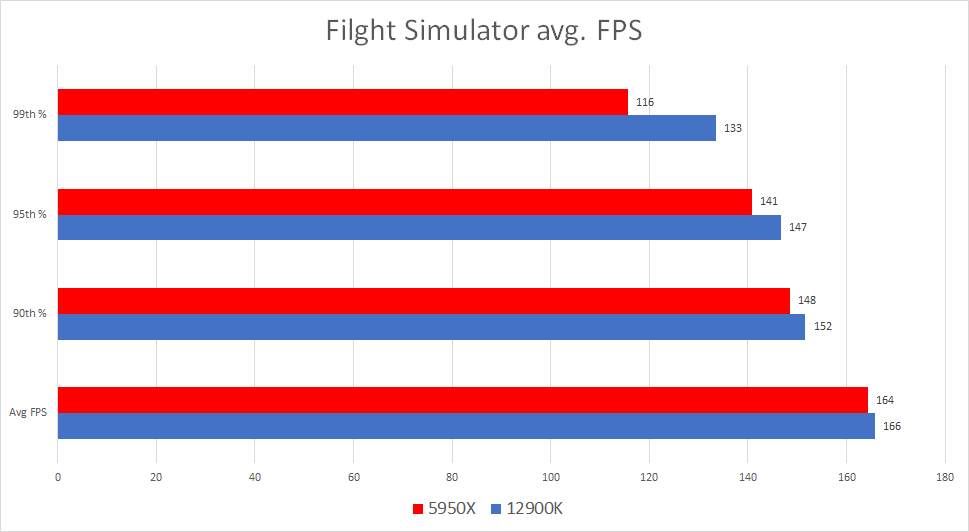 While Flight Sim is very close, you can see that the 12900K is better at maintaining a steady framerate through its 99th percentile. 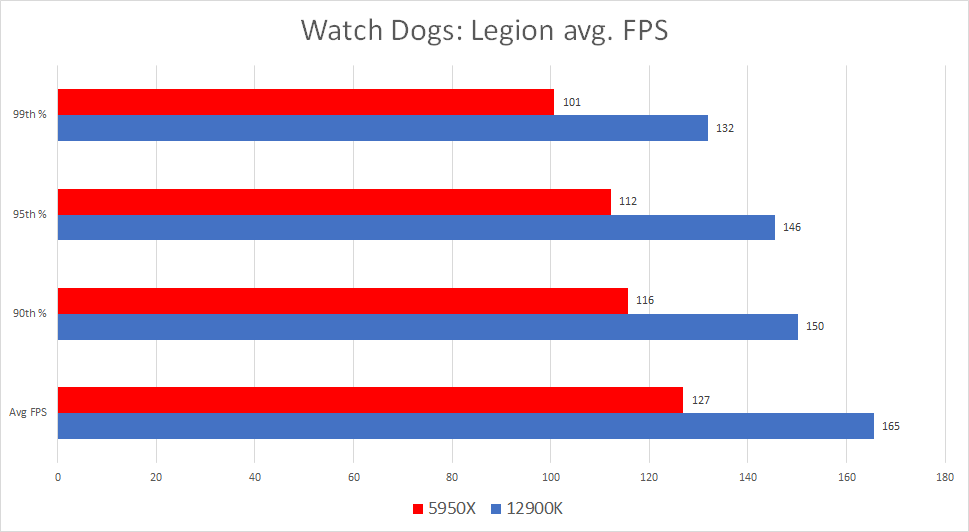 The gap widens for WatchDogs, but overall it’s the same story. The 12900K has only a small delta between its 99th percentile average and its 90th percentile. As a recap, that 99th percentile number means that 99% of the time the game ran faster than 132 frames per second. 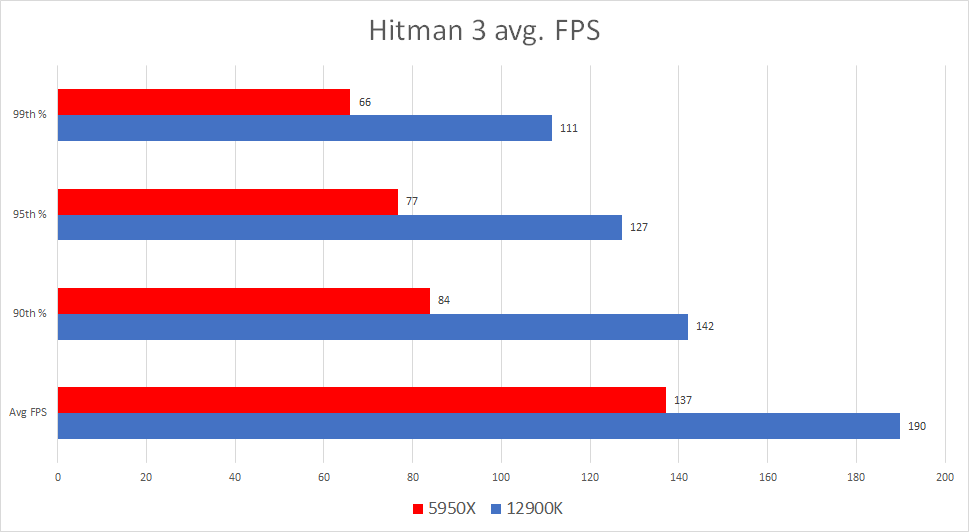 Hitman 3 really likes the Intel chip and had a rougher time with AMD. While both games have a high average framerate, the frametimes were all over the place for the 5950X.

It’s not surprising that the Intel chip is better at gaming than the competition, but it’s important to note that I test these games at reduced graphical settings to put more strain on the CPUs. If you’re spending the money to get a top-end CPU, you are probably playing in 1440p or even 4K, and that is going to greatly reduce the difference you would see between Ryzen and the Intel Core processors.

But the point here is that when you do find a difference, it is usually going to favor the 12900K.

Is Intel Core i9-12900K viable for productivity and content creation?

The i9-12900K makes a lot of sense for gaming, but it is productivity workloads that has made the Ryzen chips such a no-brainer to recommend recently. After all, if gaming is really close at higher resolutions, then it’s business and creations tasks that you’ll get your money’s worth when choosing between the two processor teams.

What’s different this time is that the 12900K is an excellent chip even when you put away the gamer fuel and need to work on professional tasks. Intel is in no way the obvious favorite in this area, but it is actually trading blows with AMD for once. The Core i9 is faster in image editing, coding, and math-heavy workloads. The Ryzen 9, meanwhile, is better at super-heavy multitasking, compression, and encryption tasks. And all this makes decision between the two processors more difficult because you won’t find a clear winner — although, to me, that actually makes it easier to choose because you cannot go wrong with either vendor.

I think the most surprising results I got came from Cinebench, which a universal benchmarking tool. In the latest Cinebench R23, my 12900K crushed my 5950X. And really, you can see the massive advantage in the single-core results. A similar-but-smaller gap exists in the Cinebench R20 results as well.

The 3DMark numbers seemingly backed up what Cinebench was reporting. In TimeSpy, the Ryzen 5950X delivered much better results than when I first tested it, but it’s still significantly behind the 12900K. For 3DMark’s new CPU Profile test, the 12900K is 16% faster in single-threaded performance. That advantage is obvious in the CPU Profile’s eight-thread test, but the 12900K begins to lose ground after that due to its efficiency cores not keeping up with the 5950X’s all-performance-all-the-time cores.

In image editing, the 12900K is 38.6% faster. And for encoding, the 12900K came away with a 5.3% lead. In the RealBench heavy multitasking test, however, the 5950X’s 16 powerful cores enabled it to complete its processing tasks nearly two full seconds quicker.

In PassMark, AMD was much better at compression and encryption.

If productivity isn’t an obvious win for one processor, then maybe power consumption and heat generation can help determine a winner. But even this isn’t clear. Through eyeballing my Kill-A-Watt during gaming and tests, it seems likely that the Core i9 uses a bit more juice. But it’s not like the 5950X is winning any awards for saving the planet.

Both of these processors are energy hogs. And both do (and are supposed to) run pretty warm — so don’t skimp on the cooler.

I think that if you run both chips for gaming, rendering, video production, or anything like that, you’ll likely save a bit of money on your energy bill by going with AMD. But I just don’t know how much people care about that if they are spending more than $500 on a CPU.

To me, it’s probably more important that the Core i9 is so obviously begging for an overclock. Intel is obviously playing it safe as it moves to a new process and architecture. And it has left a lot of performance on the table. The company will almost certainly iron that out in future iterations of this chip design. But, for now, you’re gonna be able to squeeze a lot of extra fun out them.

With my 12900K, I was able to easily get 5.3GHz all-core overclocking without even really trying. Serious overclockers are going to do some real wild stuff with this CPU. And again, because of Intel being conservative with its binning, you may not have to rely on the silicon lottery to get a great overclock yourself.

When it comes to GPUs, I’ve said for a while that you can’t really go wrong. Both AMD and Nvidia have their obvious strong areas, and that’s true with AMD and Intel CPUs to a lesser extent. When it comes to processors, I think we are in a bit of a golden era. Buy the one that fits your budget whenever you can find it at retail price, then build your system from there.

And while CPU prices were creeping up over the last few years, Intel is obviously trying to appear competitive. And that led to a situation where this Core i9, at least, feels like it’s fair and bordering on a really good deal.

If I had to choose, though, I would build an Intel machine. I’m super impressed with its performance, and I want a machine that is great at gaming first but then doesn’t slouch in production workloads. And that’s exactly how I would describe the Core i9-12900K. It also really helps that I bet I could get some extra life out of the processor with a moderate and stable overclock down the line as well as the maturing support for DDR5 in games.

Of course, if you need the 4 extra PCIe lanes, go with AMD.

Either way, you’re going to have an awesome PC that is capable in nearly every task you could possibly throw at it.

Intel provided a sample CPU for the purpose of this review.