Apple’s shift from targeted advertising to privacy earlier this year had a big impact on the financial results for social and gaming apps like in the third quarter, according to a report by Consumer Acquisition.

Apple changed its Identifier for Advertisers (IDFA) prompts to query users upfront if they wanted to be tracked for advertising purposes, and most users are saying no. The result is it is a lot harder to do targeted user acquisition advertising.

Brian Bowman, CEO of Consumer Acquisition, said in the report he estimated the industry is seeing iOS revenue loss of 15% to 35% across mobile app advertisers. Ad rates are up, ad impressions are up, and impression quality is likely down due to less effective audience targeting and measurement.

The report collected a series of statements made by game and social platform CEOs in their quarterly reports.

For many public ad networks and mobile app companies, the discussion of IDFA impact in Q2 was essentially “wait and see.” However, Q3 earnings calls provide a clearer picture of how the impact is being felt across the industry. 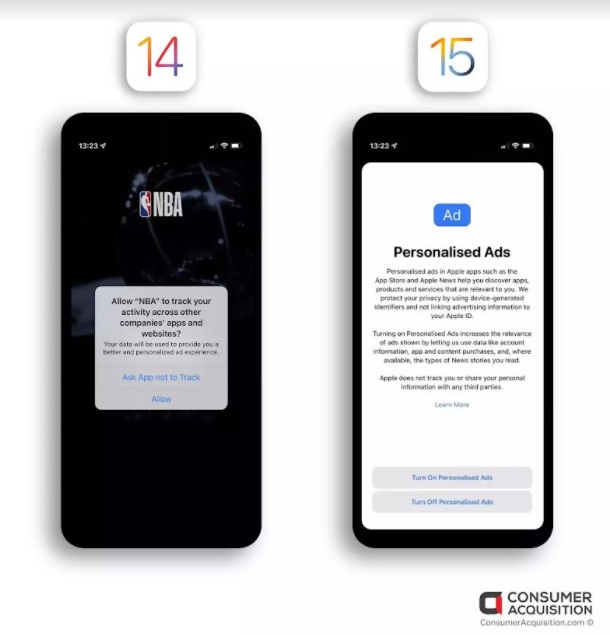 Above: Apple made changes to its prompt for the Identifier for Advertisers (IDFA).

Facebook chief operating officer Sheryl Sandberg said in an analyst call that recovery from IDFA loss is a “multi-year effort” and “will take time and will be a focus for us throughout 2022 and beyond.”

Match chief financial officer Gary Swidler said, “The market environment has become more competitive and also more challenging as a result of changes that Apple has made around IDFA.”

Peloton chief financial officer Jill Woodworth said, “There have been some significant changes made by Apple that are leading to some targeting headwinds. Like many other direct-to-consumer marketers, we’re seeing some disruptive impact as our teams adjust to the new data landscape.”

Playtika CFO Craig Abrahams said, “We were able to manage the decline in iOS installs by moving resources from social networks to other digital advertising networks and also investing in offline activity, which has increased organic installs. We also shifted budgets towards Android.”

Ironsource CEO Tomer Bar Zeev said, “It becomes clearer and clearer today that some companies are net beneficiaries of the changes, some are a bit less…. We so far, thus far we’ve seen IDFA being a net positive.”

Meanwhile, the Wall Street Journal interviewed a dozen ecommerce companies and reported they now have to spend a lot more money on ads to get the same number of sales prior to IDFA loss. Without enough data to know how effective ads were at driving purchases, many ecommerce companies reduced their ad spending.

The big ad producer WPP said it it was not affected by IDFA because that is a part of the business where the company doesn’t really operate, said WPP CEO Mark Read.

Applovin CEO Adam Foroughi said, “Our identity and our data sets and models are built on our first-party data. And so we ended up in a very advantaged position.”

Applovin forecast their “unified platform should surpass $15 billion in advertiser spend across all industry bidders entering 2023.”

Unity CEO John Riccitiello said, “Benefitting from their own data set of 3 billion people, hundreds of millions on their in-app purchase (IAP) platform and their predictive AI models, Unity gained advantage to all those who use identity… and it played out to a script almost exactly as we’d hoped.”

He said Unity is “becoming the de facto infrastructure layer of gaming” while expanding into construction, film, automotive, aerospace and education.

Zynga CFO Ger Griffin said, “We did see toward the end of Q3 … across the board improvement in the user-acquisition (UA) landscape…. We’re actually investing in user acquisition across multiple channels.” 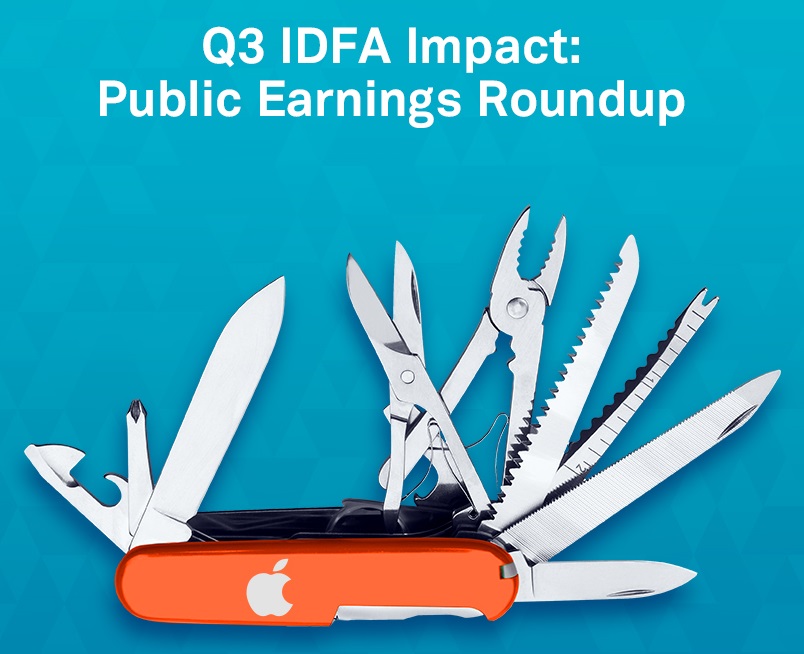 Companies reported minimal Q2 IDFA impact and continued to focus on the pandemic as the main driver of industry fluctuations. Notably, Zynga’s Q2 earnings call directly addressed Apple’s privacy changes, estimating second half bookings could be down by $100 million. IDFA loss resulted in a higher cost to acquire new players and to compensate, Zynga pulled back iOS UA spend.

Similarly, The Wall Street Journal reported that in a July poll of 118 ecommerce store owners by ecommerceFuel, 62% had decreased their Facebook ad spending since the loss of IDFA. As the impact of IDFA loss took a stronger hold in Q3, many advertisers reduced iOS spend, diversified their acquisition portfolios towards demand-side platforms (DSPs) and software development kit (SDK) networks, and focused on Android for creative testing and return-on-ad-spending (ROAS) drivers. And even as advertisers pulled back from iOS, Apple’s high-margin advertising business remained strong and is estimated to reach $20 billion in revenue by 2025, Bowman said.

Advertising constitutes 17% of Apple’s services revenue and 5% of total revenue.

Even as companies reported pandemic-related supply chain disruptions and labor shortages, economic recovery appears underway. U.S. household wealth reached a record high just as the economy entered Q3, and CEOs of the world’s biggest companies are expressing pre-pandemic levels of confidence in the global economy. October 2021 also welcomed 531,000 new US jobs in an 80% recovery from the deep recession of 2020, along with the lowest unemployment rate (4.6%) in the pandemic era. 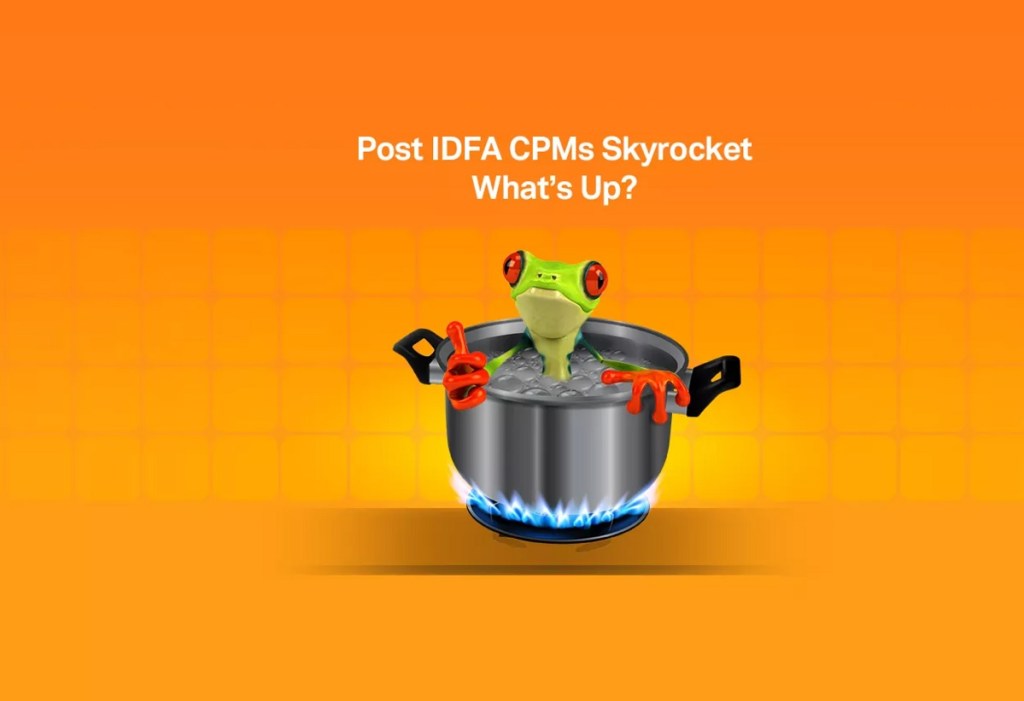 Above: Brian Bowman of Consumer Acquisition is a big critic of Apple’s IDFA move.

Bowman said that Apple’s push to regain control of iOS app merchandising and monetization by eliminating the IDFA is a once-in-a-generation shift that has affected all mobile app advertisers ranging from small businesses to Fortune 500 firms. Depending on their business and the monetization event (subscription, purchase, free trial), the impact of IDFA loss has helped or hurt each business differently.

Unity, Ironsource, and Applovin stated they are benefiting from IDFA loss, as revenue flowed into their platforms to take advantage of their first-party data and contextual advertising capabilities.

Neil Vogel of IAC said, “What we always knew is that context and content would work, and that’s what’s worked in media for the last 100 years, right? Like Enthusiast Magazine has always done great, still does great. Like a food magazine still does great, if you know what it is. So we don’t need to track people to know what they want.”

Playtika’s Abrahams credited AI and the diversification of UA sources and data analytics for the ability to adapt to IDFA loss.

“We were able to manage the decline in iOS installs by moving resources from social networks to other digital advertising networks and also investing in offline activity, which has increased organic installs. We also shifted budgets towards Android,” Abrahams said.

Based on public comments, IDFA impact is generally being accepted as the new normal, with lower-level setting and margin compression due to complexity of targeting and measurement. Businesses are acclimating and many are growing within these new constraints.

Successful strategies Consumer Acquisition is seeing emerge include companies expanding their acquisition portfolios through SDK networks and DSPs. They are also seeing more contextual advertising driven by motivation-based, persona-led creative. And they are rebuilding iOS onboarding flows to indicate monetization intent within the first 24 hours after an app install.

They are also reworking lifetime value (LTV) models to account for higher leakage into organic due to IDFA and analytics limitations. They are also mixing their media for advertising more, doing incrementality testing, going cross-platform, and finding other ways to do tracking and analysis.

In Apple’s Q3 earnings call, Tim Cook was asked about feedback he’s “seen or received from [Apple] advertisers and users and how it has also impacted search ads, your own ad business.”

The feedback from customers is overwhelmingly positive. Customers appreciate having the option of whether they want to be tracked or not. And so, there’s an outpouring of customer satisfaction there on the customer side. And the reason that we did this is that — as you know, if you followed us for a while, we believe strongly that privacy is a basic human right and we believe that for decades, not just in the last year or so. And we’ve historically rolled out more and more features over time for — to place the decision of whether to share data and what data to share in the hands of the user where we believe that it belongs.

Cook was asked about advertiser feedback and responded with his description of “customers” aligning with Apple users, as if advertisers are not also Apple customers. The omission of advertiser feedback is unfortunately consistent with their anti-industry and anti-developer practices, such as changing the entire iOS mobile app reporting and measurement system without any industry participation, Bowman said.

In a callout to the larger ecosystem consequences of Apple’s regulations during Facebook’s earnings call, Mark Zuckerberg directly addressed how Apple’s IDFA changes “are not only negatively affecting our business but millions of small businesses in what is already a difficult time for them and the economy.”

Facebook reported Q3 ad impressions were up 9% and CPMs were up 22%, while Twitter opened 30% more ad inventory for iOS users.

“We expect a bumpy Q4 for all mobile app advertisers, with ad spend that is less efficient. Recovery from mobile ad ecosystem changes will be what many companies called a multi-year effort,” Bowman said. “But while challenges persist, we are also excited to see how companies are improving and innovating in real-time to address those challenges. Because the impacts are nuanced based on target audience and business model, below are summaries highlighting different strengths, challenges, and opportunities from public companies which shared Q3 earnings.”