Alina Soltys, cofounder of Quantum Tech Partners, said the stats were part of a record nine months of financial activity for games in the nine months ended September 30. But they don’t include last Friday’s announcement that blockchain game platform Forte had raised $725 million — a big number for Q4.

She said the third quarter alone saw record merger and acquisition game company transactions of $15.58 billion, bringing the total for the first nine months of 2021 to $34.36 billion — about double the number from 2020.

Game startups also raised $8.58 billion in the third quarter, bringing the total raised to $25.52 billion. About 41 of the transactions were over $100 million. The total value has already exceeded the total raised in 2020.

Embracer Group and its associated subsidiaries announced 16 deals alone, and we can expect more deals to happen at an aggressive pace, as the 18 largest public game companies have more than $100 billion in cash. Embracer Group CEO Lars Wingefors said yesterday that the company plans to acquire 37 companies in the next year. 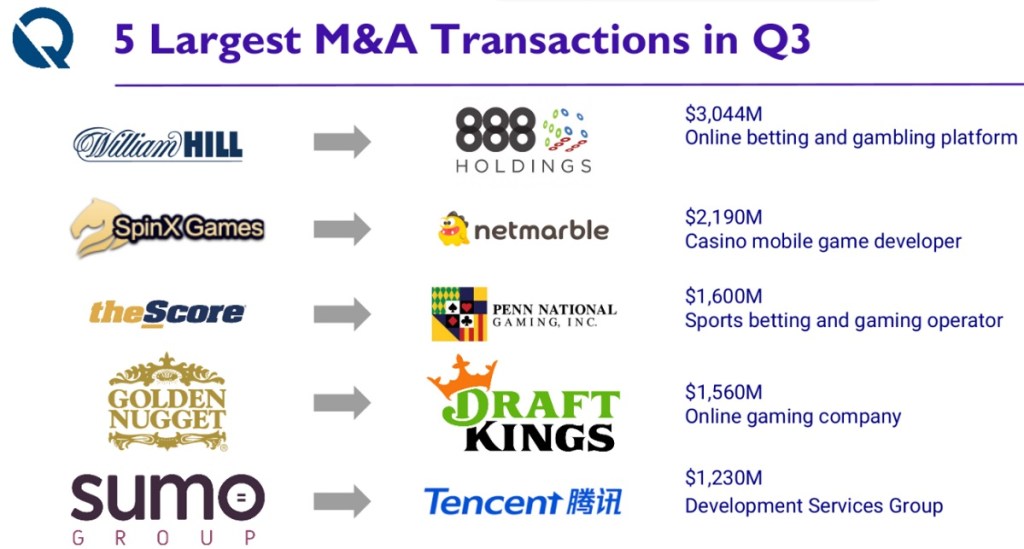 Above: Big deals in games and gambling.

Soltys said a trifecta of high valuations, record M&A activity, and unprecedented public game company fundraising led to the record nine months. She also noted that metaverse plays will likely get more attention thanks to Facebook’s changing of its name to Meta.

Public game companies are trading at 4.5 times revenues and 15.3 times EBITDA (earnings before income taxes, depreciation, and amortization). And they have more than $100 billion in cash. From a year ago, the number of M&A deals was up 47.8% from a year ago.

“The credit, bond, and debt offerings add up to a lot of money over time,” Soltys said. “They make all of that M&A possible. In the Nordics in particular, the banks and family offices are participating in games in a big way.”

Among the biggest deals, in games, NetMarble bought SpinX Games for $2.19 billion, and Tencent bought Sumo Group for $1.23 billion. EA spent $3.5 billion in the past nine months on acquisitions of Glu Mobile and Playdemic, while Bytedance spent $4.775 billion.

Above: The top acquirers in games.

“A lot of these groups are looking for game development talent because there is such a shortage,” Soltys said. “They’re having a hard time hiring internally. They’re looking for other studios and other teams that can come in and help work on some of their intellectual properties.”

What’s challenging is that many game developers want to develop their own original games, rather than working on someone else’s ideas. Still, companies like Embracer acquire studios and let them work on what they want, without intervention, Soltys said. That has enabled the company to do so many deals.

“The studios get full creative control,” Soltys said. “They get the best of both worlds.”

The money has been coming in continuously thanks to new entrants, like Bytedance and other large investors.