Sherlock Holmes Chapter One is an odd duck, with one foot in its point-and-click adventure game roots and the other in action-oriented open-world modernity. At its best, it’s a fun detective simulator with investigation, deduction, and all the things you want when you play Sherlock Holmes. At its worst, it’s a low-rent action-adventure title starring a knock-off Batman, complete with useless sidekick.

Chapter One is ostensibly a prequel about a youthful Sherlock Holmes investigating his mother’s mysterious death on the fictional island of Cordona. I say “prequel,” but Holmes still has all his deductive, investigative, and martial powers, so make of that what you will. He investigates a number of cases, and the players must follow clues, search crime scenes, and piece together what really happened.

Professor Plum in the library with the candlestick … oops, wrong game

There are very few game series that have had the glow-up that the Frogwares Sherlock Holmes series have seen. The series’ humble beginnings as a Syberia-style point-and-click adventure game show through in odd places, but the effect is kind of charming. Frogwares’ version of Holmes has adapted with the modern interpretation of the character. When the series started, he was closer to Jeremy Brett’s classic Holmes performance — cool, charming, and not at all inclined to emotional outbursts. Now, as modern media has shifted to the Benedict Cumberbatch Sherlock version of him, Frogwares’ Holmes is similarly evolving. They even refer to the character’s deductive space as his “mind palace.”

Whether that’s a good evolution or a bad one will depend on one’s own preferred version of the character. I’m admittedly not a fan of Sherlock, so the parts it borrows from that show didn’t impress me, but it might tickle your fancy. And Frogwares is clearly fond of all versions of this character and tries to merge each of them together into a single, complex person. It works parts of the time and well enough that I didn’t dislike Holmes at all. 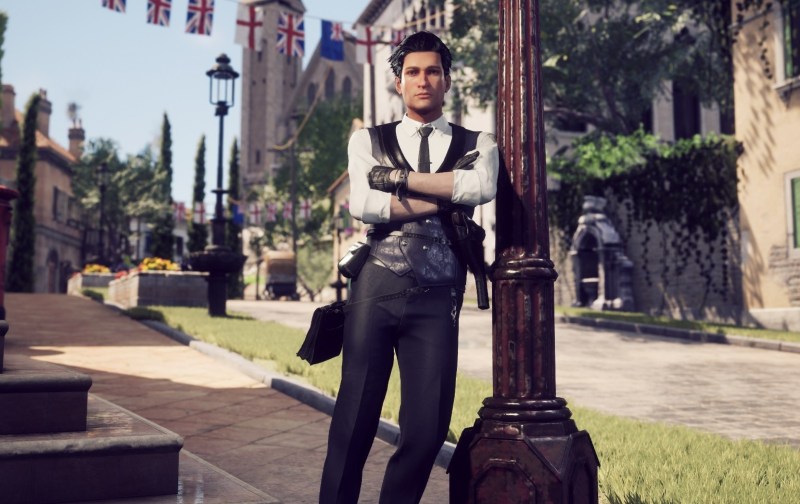 The moments when the player is investigating a crime — and must piece together different clues in order to make deductions — are the game’s high points. You must thoroughly follow up on all leads in order to get a complete picture of the situation, and Holmes can do everything from eavesdrop on gossiping witnesses to disguising himself to enter various locations.

The mysteries are complex, interesting, and enjoyable. Chapter One offers fun locations to investigate and colorful characters to interrogate. Some of these mysteries require a bit of thought to parse, and while it’s never completely inscrutable, the game does have its tough moments. I reveled in them, and I think any player with a background in adventure games will enjoy them, though I can’t honestly say they would be for everyone.

Meet me in Cordona

Still, for all its ambitions, Chapter One is clunky in places. The menu is one big area. In order to open up certain paths of investigation, you must “pin” certain pieces of evidence in your casebook. This would be fine were it not for the fact that there are several pieces of evidence, and it’s not always clear what needs pinning. There’s no way to really keep track of or organize all the evidence. Similarly, when disguising Holmes, it’s not always clear what elements of the disguise are out of place or not. It would have been more helpful perhaps to have useful descriptions of the disguise elements. Otherwise, it’s hard to quantify the difference between two fake mustaches. 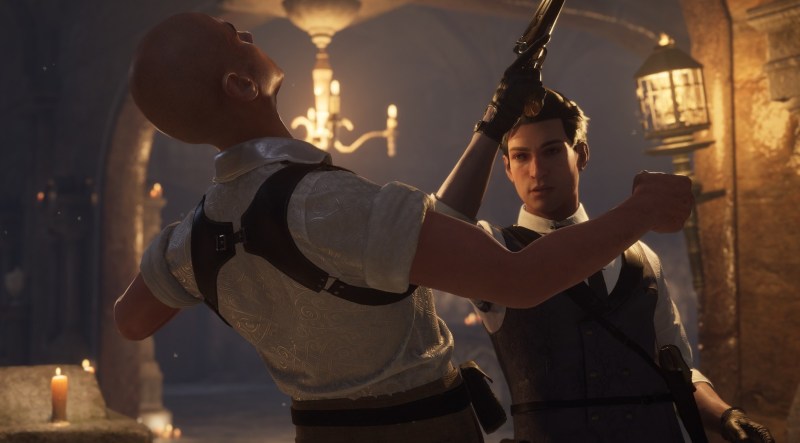 The action combat is also ghastly. I get it — Holmes has training in martial arts and freely uses a pistol, but that’s not the gameplay I want when I boot up a Sherlock Holmes game. It reminds me of my first time playing L.A. Noire and my howls of dismay whenever enemies would arrive and throw me out of the lovely detective game I’d been enjoying up to that point.

Chapter One is also supposed to be an open world, but there’s nothing in Cordona that’s worth the long treks up and down the streets. For as much as NPCs populate the roads, they’re empty of anything to actually do. It’s the opposite of an Ubisoft sandbox. The game’s look is also not terribly modern. There are several small technical problems, like texture pop-in. There are parts where Sherlock walks, starts jogging for no reason, and then walks again. The models and environments, excepting those of the major characters, are kind of simple and would look more in place in a previous-generation game. But the bright colors and the art design make up for some drawbacks in these cases — not all of them, but some. 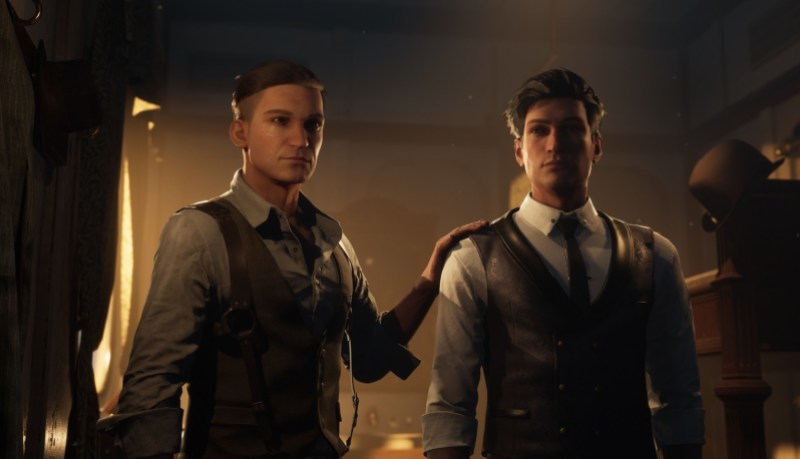 If there’s one thing in this game that leaves me shaking my head, it’s Sherlock’s companion character. No, it’s not John Watson. It’s an imaginary friend called Jon whom Sherlock has kept well into his twenties and who, for some reason, the developers did not turn into a built-in hint generator. Perhaps the developers had a horror of having Sherlock carry a game by himself or to vocalize his internal monologue. But the addition of what amounts to a scruffy Navi who constantly chirps nothing of actual substance is at best unhelpful and at worst deeply annoying.

Jon also keeps a journal for some reason, where he writes up various notes about what Sherlock is doing. Again, perhaps this could have been useful if it contained hints for when the player got stuck. But it doesn’t. Instead, it’s either Jon admiring Sherlock’s powers of deduction or complaining about how he’s not doing it right. In the first case, I dared to question more than one witness in an area, and Jon’s journal was filled with half-a-dozen identical gripes about how I was bothering everyone.

Sherlock Holmes Chapter One is a decent adventure game that lets you play as the great detective. The trouble is, it wants to be more than that. It wants to be an action-adventure game with an open world. It wants Sherlock to be a fun and interesting player character, but the game makes him drag around a buddy who’s even less helpful than Watson.

That said, I am curious to see where Frogwares goes from here. Mysteries, not action, make for a good Sherlock Holmes game (as should be obvious), and I want to see if Frogwares sheds the latter or chooses to double-down instead.

Sherlock Holmes Chapter One is out now for PlayStation 5, Xbox Series X/S, PlayStation 4, Xbox One, and PC.