The Roblox Corporation has filed a lawsuit in California against YouTuber Benjamin Simon for making terrorist threats against the studio and its users. Roblox is seeking $1.65 million in damages. Ben Simon, known online as Ruben Sim, has over 750,000 subscribers. Simon is primarily known for his Roblox focused videos. His fame comes from having been banned from Roblox multiple times.

The lawsuit describes Simon as the leader of a “cybermob” which utilizes malice, fraud, and oppression to commit unlawful acts to damage Roblox and its users. It alleges that Simon made terrorist threats in an effort to shut down the Roblox Developers Conference in October 2021. The lawsuit also alleges Simon glamorized the 2018 YouTube headquarters shooting and threatened a copycat act on the Roblox headquarters. The lawsuit goes on to accuse Simon of using racist and homophobic slurs against users, as well as engaging in sexual discussion and harassment on the platform.

Roblox is an online game primarily aimed towards children and young teens. 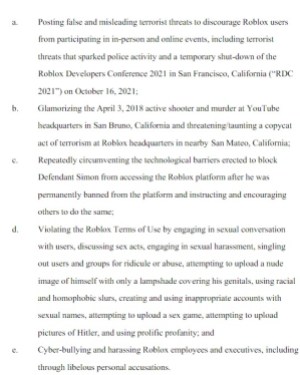 When developers talk about how they have an ethical responsibility it’s quite possible they are talking about situations like this. As online games, either traditional or metaverse, grow and attract users they will inevitably have users acting in bad faith.

How they handle things like this in the future may be one of the most important variables towards the success of their product. Roblox’s lawsuit against Simon might finally deal with one of their more famously problematic content creators. It’s troubling it took 6 years from his first ban to the potential final nail in the coffin.