Apple has had a controversial year when it comes to talk about its App Store, given its litigation with Epic Games over royalty rates and antitrust issues. But Apple CEO Tim Cook took a moment to say that Apple loves games, game developers, and app makers as well.

“This is one of our favorite times of the year at Apple, when we honor our talented developer community and their incredible work making apps that entertain, inform and inspire us,” Cook said in a statement. “In 2021, apps played a more essential role in our lives than ever before. They helped keep us moving forward in a year that continued to challenge us in so many ways, as a global community and in our own lives. Apps helped us form deeper connections with one another, express our creativity, and engage with new people, experiences and cultures.”

I had a chance to interview four of the game winners about their work, and you can see their comments below. On the iOS platform, the developers get access to as many as 1.5 billion users.

This year’s winners include developers from around the world whose apps and games were selected by Apple’s global App Store editorial team for delivering exceptional quality, innovative technology, creative design, and positive cultural impact.

“The developers who won App Store Awards in 2021 harnessed their own drive and vision to deliver the best apps and games of the year — sparking the creativity and passion of millions of users around the world,” said Cook. “From self-taught indie coders to inspiring leaders building global businesses, these standout developers innovated with Apple technology, with many helping to foster the profound sense of togetherness we needed this year.”

Apple TV Game of the Year: Space Marshals 3, from Pixelbite 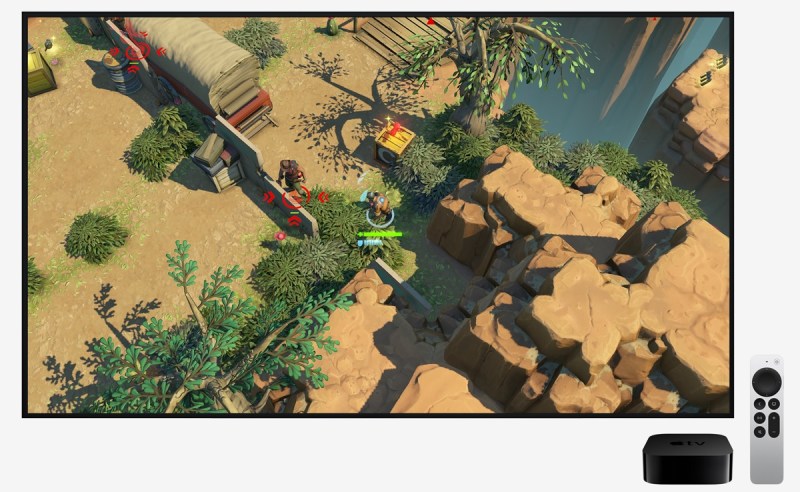 Space Marshals 3 is a space Western action-adventure with tactical combat, stealth, and humor. Developer Adam Mathias said that the original inspiration for Space Marshals game of 2014 was TV shows like Firefly, Justified, and Futurama.

The game is played from a top-down perspective and players have to use stealth to sneak around the bad guys and get the drop on them. The game has done surprisingly well in places like China.

“It is really great both with touch controls and the gamepad, and it looks awesome on big TV screen,” Mathias said. “We’ve overestimated how much story we could fit into one single game. Now we’re on the third game and the same storyline is still going. One important thing we learned over the years is it can be a real challenge to tell a story with just a few short lines of dialogue.”

A new chapter is coming in the first quarter.

iPhone Game of the Year: League of Legends: Wild Rift, from Riot Games 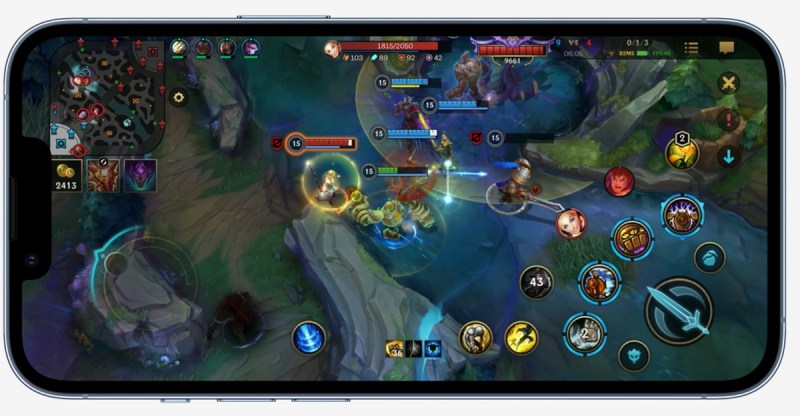 Above: League of Legends: Wild Rift.

“At the core of the Wild Rift is just honoring that legacy, honoring our players over the last decade playing the game,” Chow said. “We’ve spent the last year rolling out Wild Rift across the globe and so far, the results have been pretty stellar.”

Chow said it wasn’t easy, as it wasn’t even possible to bring the quality of League of Legends to mobile for a long time. The team tackled how to do gameplay on mobile, how to implement competing teams on mobile, how to stay in harmony with players and mobile devices of various kinds and getting them to play for more than a few minutes, and then getting players to know the the lore and to love it.

“Our success on each of these questions was really about dreaming big,” Chow said. “And this is a core tenet of the Riot culture, dare to dream,” while struggling through a period of “creative darkness.”

He added, “We spent years fighting this conventional wisdom that a mobile action games can’t have a lot of buttons.”

The game ended up with 32 buttons on the screen.

“Everybody else thought we were crazy,” Chow said.

iPad Game of the Year: Marvel: Future Revolution, from Netmarble 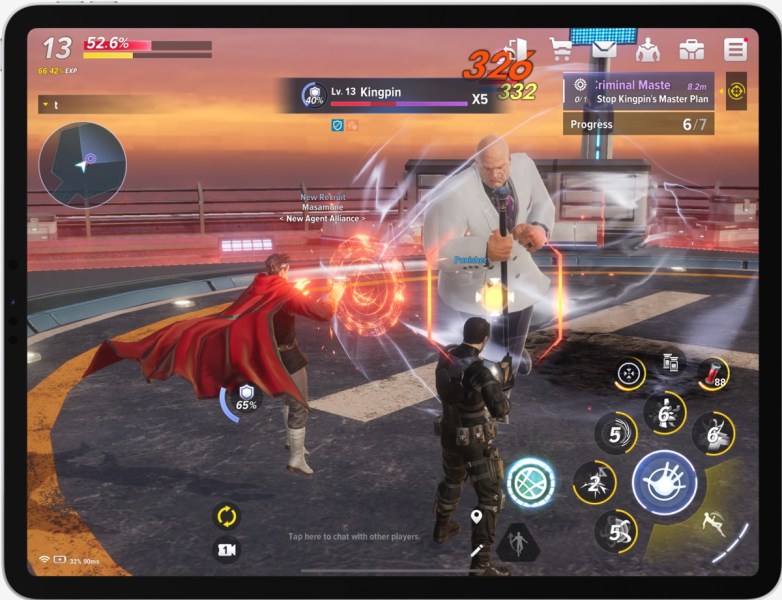 “One of our main missions was to actually achieve to gameplay graphics on a small screen that set the boundary of the mobile platforms,” Lee said. “We wanted to imagine playing a role as a superhero in a big bunch of Marvel movies. And now you can actually see multiple heroes on on the screen right here, putting you in a battlefield situation located in the rapid maximum security prison that you may recognize if you’re a Marvel fan.”

The game has a ton of customization and skill leveling up that can make your superhero far different from another player’s. It also runs at 120 hertz with the latest iPhone 13 screens. The game topped the charts in 117 countries within the first 24 hours. And Netmarble keeps updating it. The team of 200 developers created the game over three years.

Mac Game of the Year: Myst, from Cyan 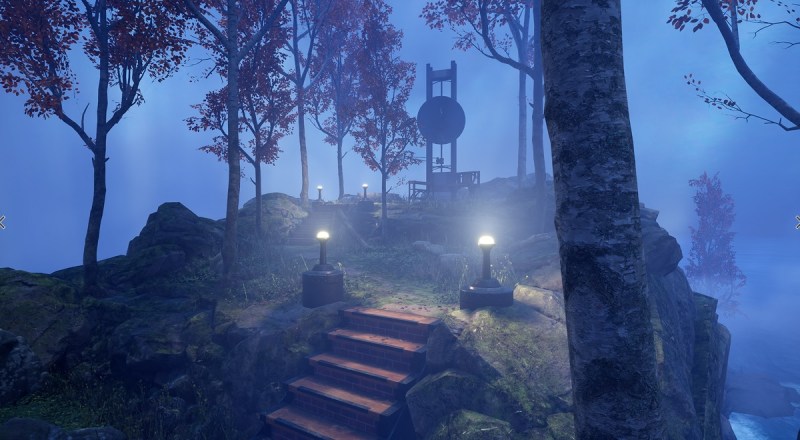 Above: Welcome to Myst Island.

Myst was a complete remastering of the original game with much better graphics, said Rand Miller, cofounder of Cyan, in an interview.

“You know this more than anybody that this is just a grand experiment for us, dude,” Miller said. “It feels like 1991 with Myst, or 1986 when we started on the Manhole. From there, it’s just been an evolution. Every time the Mac has new tech, we try to do a makeover of Myst.”

Cyan is still an indie game company and it experiments with taking Myst into new environments. Hannah Gamiel said that she and Eric Anderson worked on the title with a team and it was a kind of rite of passage for newcomers at the company. The team worked on upgrading the graphics and details in the game, like changing the controls for a clock, but it kept some things that felt like such as the dimensions of the tower in the game. The team made the game in Unreal Engine from the ground up, and it couldn’t use any of the older assets.

“This new version of Myst is something we’re really proud of and we really just enjoy showing it off,” Miller said.

Apple Arcade Game of the Year: Fantasian, from Mistwalker 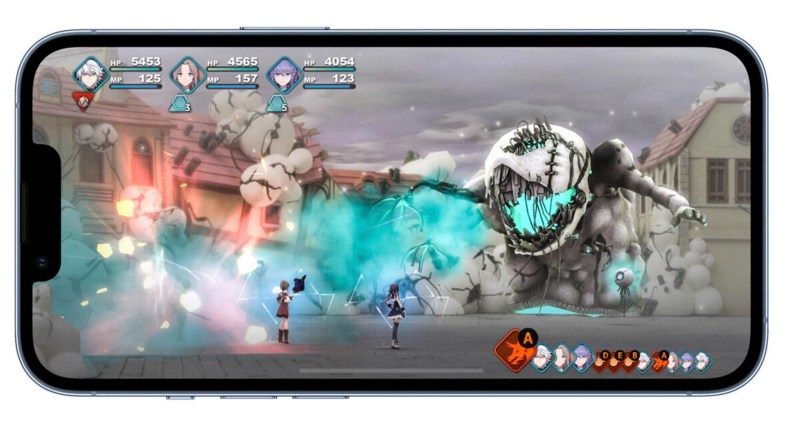 Fantasian was an epic Apple Arcade game from the creative mind behind Final Fantasy.

iPad App of the Year: LumaFusion, from LumaTouch.

Mac App of the Year: Craft, from Luki Labs Limited.

Apple TV App of the Year: DAZN, from DAZN Group.

Apple Watch App of the Year: Carrot Weather, from Grailr.

Trend of the Year: Connection

In addition to recognizing the best apps and games on Apple devices, Apple’s global App Store editors name a Trend of the Year. The goal is to identify a movement that had lasting impact on people’s lives, and to recognize the standout apps and games that met that moment. The top trend of 2021 is “Connection.” This year’s trend winners brought people together in meaningful ways — while meeting social, personal, and professional needs for users around the world.

Based on that trend, Apple honored Among Us from InnerSloth — a game of banter, bluffing, and teamwork. It also honored Bumble, from Bumble Inc., a new social network focused on women; Others honored were Canva, which lets users create designs and templates; EatOkra, which focuses on Black-owned eateries; and Peanut, a social audio app for women.

Here’s the most-downloaded apps on the App Store in the United States for 2021, by category.