Humans are always much smarter than computer AI, as I relearned while playing the pre-alpha multiplayer demo for Company of Heroes 3.

Sega and Relic Entertainment launched a demo for the World War II Italian campaign game on Steam on Tuesday.

The high-profile real-time strategy game will debut in 2022, but developer Relic said that they had a pre-alpha slice of gameplay ready for multiplayer players ready to try. I downloaded it from CompanyOfHeroes.com and started playing it yesterday. And the humans who hopped into the game early handed my head to me.

Part of a series that has been around since 2006, the Company of Heroes games test your ability to control both the tactical real-time 3D battles and the thoughtful turn-based strategic 2D campaigns. And this one is set in Italy, as U.S. and British forces try to dislodge the entrenched German Army from places such as the Monte Cassino monastery on top of a mountain. 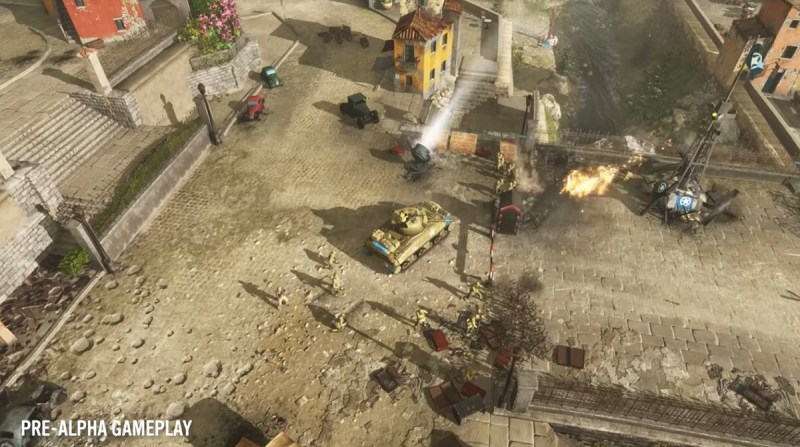 Above: Company of Heroes 3 has a Steam demo.

I played the single-player campaign slice that focused on the invasion of Naples earlier in the summer. I played about 10 hours of the campaign and enjoyed battles like taking the Pomigliano airfield from the Wehrmacht using a combined British and U.S. force. But that wasn’t enough training for the multiplayer combat, where I played both 1-versus-1 and 2-versus-2 modes.

So far, I’ve only played on the U.S. side, and therein lies some of the problem. The Germans had the Americans beat on a tactical level, both with veteran soldiers and with better equipment like Panzerfausts and MG42 machine guns. When a typical German squad goes up against an American squad in the game, the Germans usually win. My strategy was to try to produce a lot of rifle squads at my headquarters and then send them out to capture as many victory points, ammo dumps, and fuel depots as possible early on.

But inevitably I ran into German squads that ripped my infantry to shreds. Then I had to retreat and concentrate my forces in places like buildings that overlooked the victory points. It’s always pretty hard to judge how large the enemy forces are, as they are hidden by the “fog of war,” meaning you can only see your own troops until the firefights start. 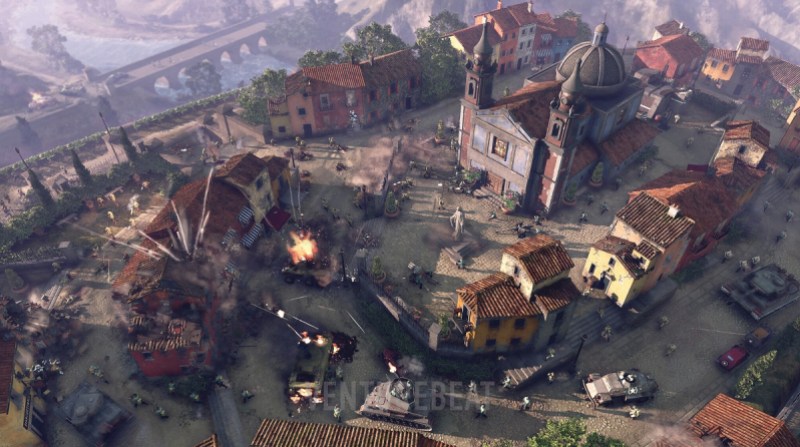 Above: Beautiful Mediterranean environments are destroyed in Company of Heroes 3.

At that point, whether you’re playing solo or playing with a partner, it becomes a race. You have to take and hold enough positions to start earning more resources. Then you use those resources to upgrade the infantry you can produce, like enabling the HQ to deploy Browning machine gun squads. I kept producing the basic squads and pumped them out, but since the enemies typically seized more territory than I did or just pushed me back, I didn’t generate as much firepower.

I tried to produce armor, but I could only get half-tracks with 75mm guns. Those took care of the machine gunners, but they didn’t fare well against infantry with Panzerfausts or German armor. So, inevitably, my side went into a long and slow decline, and I eventually went down in defeat. I’ll keep playing and trying to level up, but this pre-alpha won’t last forever.

The studio has gotten feedback on the single-player demo released earlier this year and is looking forward to hearing from its community yet again on the upcoming multiplayer pre-alpha. I have noticed that when you have a mismatched squad in a firefight, that fight ends really quickly. You can’t get a stalemate in these tactical battles, so you have to make sure you have overwhelming force and cover in each skirmish.

It was a nice diversion in a week where I had a rare break in stories to cover or interviews to do. I am looking forward to spending a lot of time with this game when it debuts next year.

It has been more than eight years since Company of Heroes 2 debuted in 2013 with a Russian Front setting. I loved playing the original Relic/THQ title, Company of Heroes, when it came out in 2006 with a Normandy/Cobra battleground. Talk about pent-up demand. I’m looking forward to reliving history or rewriting it.