Non-fungible tokens (NFTs) have been on a roll this year, with $26.9 billion worth of cryptocurrency traded on the two popular types of Ethereum smart contracts associated with NFTs, according to an analysis by Chainalysis.

Non-fungible tokens (NFTs) have skyrocketed in popularity over the last year in a variety of industries from collectible art to games. NFTs use the security and transparency of the digital ledger of blockchain to authenticate the uniqueness of digital items. So it can be used to confirm that a piece of art or a game character is a one-of-a-kind collectible, and that is fueling new business models.

Most NFT projects are built on the Ethereum blockchain — and that data can be associated with files containing media such as images, videos, and audio, or even in some cases physical objects. NFTs typically give the holder ownership over the data, media, or object the token is associated with, and are commonly bought and sold on specialized marketplaces.

So far in 2021, users have sent at least $26.9 billion worth of cryptocurrency to ERC-721 and ERC-1155 “smart contracts,” the two types of Ethereum smart contracts associated with NFT marketplaces and collections. About $16 billion of that money has filtered through OpenSea, the largest NFT marketplace by far.

Chainalysis said it sees significant increases in both total value sent and average transaction size, suggesting that NFTs as an asset category are gaining value as they attract new users. There’s also a noticeable spike beginning in the last week of August, which appears to have been largely driven by the release of a new collection from the popular NFT creator group Bored Ape Yacht Club.

But one nagging question is, “How long will this last?” Just as we’ve seen volatility in the price of the popular Bitcoin and Ethereum cryptocurrencies, NFTs carry a risk of a crash. In response to a question from GamesBeat, Chainalysis economist Ethan McMahon said NFT markets — like crypto markets generally — go through periods of bullish and bearish activity. Just this year we’ve seen tremendous growth during the summer and a pullback in the early parts of fall.

“We see no reason to think that these waves won’t continue in the future,” McMahon said.

The first sign of a crash would be an aggregate drop in floor prices might indicate a selloff. One of the questions associated with this is whether investors are trying to make a quick buck or believe in NFTs for the long term. McMahon said those who choose to sell their newly minted NFTs do so more quickly than those who are purchasing an already sold NFT. McMahon said that the firm continues to explore whether it can make predictions on where the NFT market will go.

Roughly 50% of first-time sales are completed within two days of the initial mint (or creation of the NFT on the blockchain). It takes about five days to reach this same mark for secondary sales after purchase. Of course, we see some exceptions, and some sellers recognize a profit can be made off of a near instant resale and others sell after months of holding. 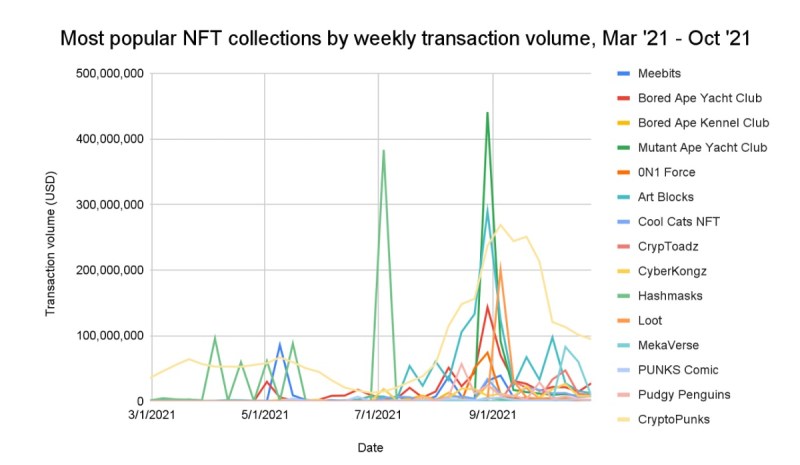 Above: The most popular NFT collections by weekly volume.

Most users buy NFTs on dedicated marketplaces, similarly to how they might buy that function conventional cryptocurrencies on an exchange. Many NFT marketplaces, such as OpenSea, don’t keep NFTs in custody for users. Instead, they allow users to transfer NFTs directly between their own wallets — in this way, those marketplaces are similar to decentralized exchanges or peer-to-peer (P2P) exchanges.

Others, however, like Dapper Labs, handle custody on behalf of users. The chart above shows the most popular NFT collections being traded on these marketplaces over time.

CryptoPunks, which was established in 2017 well before the current NFT craze, has been the most popular NFT collection during the time period studied, with more than $3 billion in transaction volume since March 2021. But some NFT collections experienced brief but large spikes in transaction activity without ever gaining consistent popularity.

For instance, Hashmasks saw more than $380 million in transaction value during the week of July 4, 2021. In no other week during the time period studied did the collection see more than $95.7 million, and its average weekly transaction volume for the entire time period studied was just under $21 million. The pattern is similar with Mutant Ape Yacht Club.

“To date, Axie Infinity has been the most popular game in the crypto space,” McMahon said. “The recent hype surrounding the metaverse has put the spotlight on a number of metaverse and gaming projects and also spurred the creation of many. It remains to be seen if this sector of the crypto space will continue to be the hottest narrative.”

Where the NFT buyers are

Above: NFT buyers by region

Web traffic data for popular NFT marketplaces shows where in the world most NFT users are located. The firm saw a strong mix of web visits from central and southern Asia, North America, Western Europe, and Latin America.

The numbers suggest that like conventional cryptocurrency, NFTs have achieved global popularity, with no region making up more than 40% of monthly web visits since March 2021.

The data show that growth began to increase quickly in July 2021, rising steadily through October. The number of active NFT collections peaked at over 2,300 the week of October 24, up from just 193 at the beginning of March. Web traffic analysis shows that the United States accounts for more OpenSea users than any other country.

NFT trading is more retail-driven than cryptocurrency trading overall. The vast majority of NFT transactions are at the retail level, meaning below $10,000 worth of cryptocurrency.

The data show that the NFT market is far more retail-driven than the traditional cryptocurrency market, where retail transactions make up a negligible share of all activity. 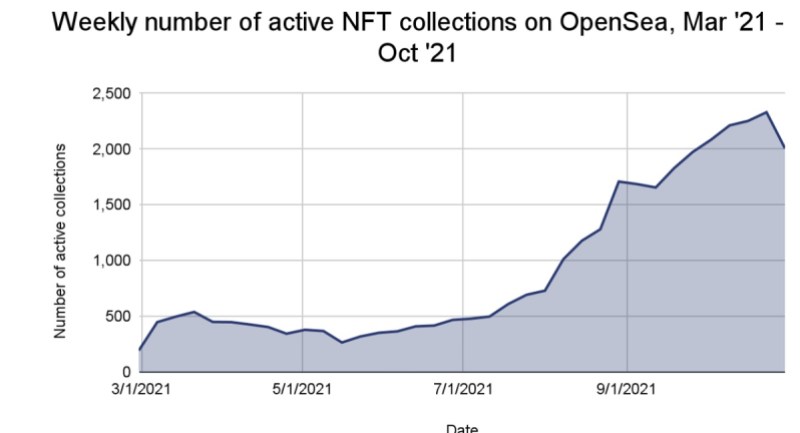 Above: Activity for NFT collection sales on OpenSea.

Anyone paying attention to the NFT market knows that investors have flocked in part because they believe they can achieve a high return on investment by purchasing NFTs — either during the minting process or by purchasing them from another user — and selling them later for a profit.

But NFTs are far from a surefire investment. Transaction data from the OpenSea marketplace shows that just 28.5% of NFTs purchased during minting and then sold on the platform result in a profit. Buying NFTs on the secondary market from other users and flipping them, however, leads to profit 65.1% of the time.

More than anything else, NFTs run on community and word of mouth growth. If you look at virtually any successful NFT project, you’ll likely find Discord servers and Twitter threads full of enthusiasts promoting the project, the firm said. NFT creators typically begin promoting new projects long before the first assets are released, gathering a core of dedicated followers who help promote the project from the outset.

NFT creators will then reward those dedicated followers by adding them to a “whitelist,” allowing them to purchase new NFTs at a much lower price than other users during minting events.

OpenSea data show that users who make the whitelist and later sell their newly-minted NFT gain a profit 75.7% of the time, versus just 20.8% for users who do so without being whitelisted. Some of this is controversial, as it can encourage “pump and dump” schemes where investors hype an NFT only to sell it off before its price crashes.

Overall, 78% of sales by unwhitelisted buyers later result in a loss on resale, with 59% resulting in a loss equal to or below 0.5x their initial investment. 78% of sales by whitelisted buyers, on the other hand, result in a profit, with 51% resulting in a profit of 2x or more the initial investment. The data is clear: Whitelisting provides a significant financial reward for those who play a role in an NFT project’s success by seeding its early community growth efforts.

However, if you’re not on the whitelist, it’s significantly harder to turn a profit after buying a newly-minted NFT. Flipping NFTs with a prior sales history, on the other hand, has a much higher success rate than reselling NFTs bought during minting. NFT flipping activity is quite concentrated. Over 2,000 individual NFT collections on OpenSea have had a secondary sale, but just 250 collections account for 80% of those secondary sales. And the base of activity is fairly narrow, as 20% of user addresses on OpenSea account for 80% of secondary NFT sales, while just 5% of all addresses account for 80% of profits made on secondary sales. The most successful investors are the most active and they have a lot of experience — which makes sense compared to other kinds of investments. 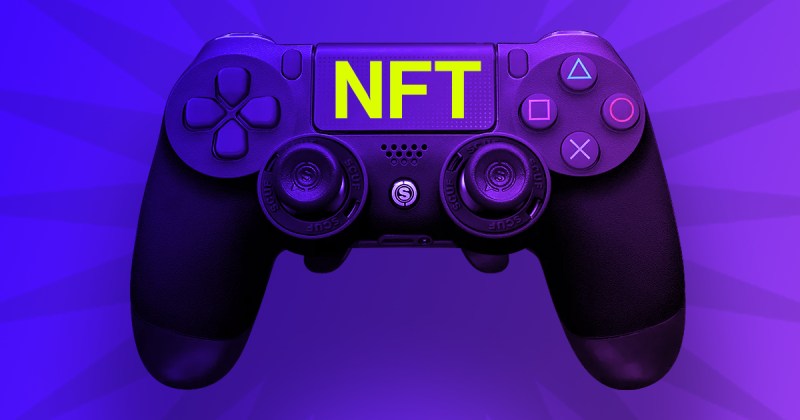 Above: NFTs in games are starting to come on strong.

Chainalysis determined that collectors are better off flipping NFTs they buy on the secondary market than NFTs purchased through minting. But investing in newly-minted NFTs may be even less profitable than figures would expect due to an understudied aspect of the minting process: The immense number of failed transaction fees.

Buying newly-minted NFTs from a highly-anticipated collection is an extremely competitive process, with thousands of users rushing to buy at the appointed minting time. They’re not always successful though. Many users attempt to buy either too early, before minting has actually begun, or too late, when the collection has sold out.

Unfortunately, they still must pay Ethereum gas fees on those failed transactions, which go to Ethereum miners to reimburse them for processing and validating transactions on the Ethereum blockchain, as is the case for gas fees on successful transactions too. If one includes those gas fees in profitability calculations, buying newly-minted NFTs becomes a much less attractive investment than one would initially think. It also appears that some experienced users employ bots to purchase NFTs as soon as minting begins, resulting in more failed transactions — in some cases by the bots themselves — making profitable trading even more difficult for the average user.

Chainalysis saw a great example of this recently during minting for an NFT collection called The Sevens. The Sevens is a collection of 7,000 NFTs that began minting on September 7. Within just an hour after minting began, users had attempted over 26,000 failed transactions, resulting in over $4 million in fees.

Most users who attempted failed transactions didn’t try again. But interestingly, several addresses failed multiple times — some addresses ended up attempting over 100 failed purchases, paying over $100,000 in gas fees. That makes you wonder if they were bots.

One way NFT creators could address this problem would be to mint NFTs on Layer 2 protocols — meaning NFT marketplaces or other dedicated services built on an underlying blockchain — and then allow users who buy them to transfer them to Layer 1, which is the blockchain itself.

NFTs represent one of the most exciting, fast-growing areas of the cryptocurrency world, and have become especially popular with retail investors. However, those looking to collect and trade NFTs must understand how competitive the market is, Chainalysis said.