Imagination Technologies has announced Catapult, a new family of RISC-V central processing unit (CPU) designs aimed at the next generation of computing.

The Kings Langley, United Kingdom-based company designed the family from the ground up for next-generation heterogeneous compute needs, said Shreyas Derashri, vice president of compute at Imagination, in an interview with VentureBeat.

The chip designs take advantage of the free and open-source RISC-V CPU architecture, which represents a challenger to the established architectures based on those from Intel and Arm. The fast-growing RISC-V community is gathering for a conference this week in San Francisco, as well as online.

“As computing needs increase, the trends are moving towards heterogeneous compute,” said Derashri. “The underlying hardware will be a mix of CPU, or GPU, or neural network accelerators. And the challenge for us as an industry is to provide the infrastructure for developers to develop and utilize this platform that is coming in the future. Imagination is very well placed to provide that.”

Based on RISC-V, the open-source CPU architecture, which is transforming processor design, Imagination’s Catapult CPUs can be configured for performance, efficiency, or balanced profiles, making them suitable for a wide range of markets. They’re a kind of successor to MIPS, the chip architecture that Imagination bought in 2012. Imagination still has access to a substantial number of patents in designing its CPUs.

Founded in 1985, it became a real player in intellectual property designs for both processors and graphics chips. But in 2017, Apple parted ways with Imagination, as far as licensing its mobile graphics chip designs. Imagination ended up in a legal battle with Apple and sold off its MIPS processor licensing business.

As for MIPS, “We sold it because we had a feeling that RISC-V was the right trend for the future,” said David Harold, chief marketing officer at Imagination, in an interview with VentureBeat. “We’ve always been interested in the CPU because it defines the architecture and structure of the [chips]. It’s very important to the security model and the move to heterogeneous computing.”

In November 2017, the Canyon Bridge private equity firm acquired Imagination Technologies for $719 million and took it off the public markets. This time, Imagination believes it has a winner.

“It’s a ground-up design that is not following the MIPS path,” Derashri said. “One fundamental difference is the open source nature of it. You have an ecosystem trying to support this, which we lacked in the MIPS days. The biggest challenge competing against Arm was the ecosystem. Here, we have 1,000 or so companies working towards making this success.”

In January 2020, Imagination unexpectedly announced that Apple had signed a new multi-year licensing agreement. It was vague, but it was reportedly so Apple could add real-time ray tracing graphics to its mobile devices. In January 2021, Imagination said it had posted revenues of $125 million, up 44%, and lifetime sales of chips based on its intellectual property of 11 billion.

“As the RISC-V market continues to mature, we anticipated Imagination adopting the popular ISA for its renewed focus on CPUs,” said Mike Demler, an analyst at The Linley Group, in a statement. “By applying its extensive experience with other CPU architectures, the new Catapult cores combined with the company’s GPUs and AI accelerators differentiate its offering from other RISC-V IP vendors. With a CPU line-up spanning microcontroller cores to apps processors, Imagination is the new contender to watch.”

Now customers have a wider choice of solutions built on the open RISC-V ISA, avoiding lock-in with proprietary architectures. 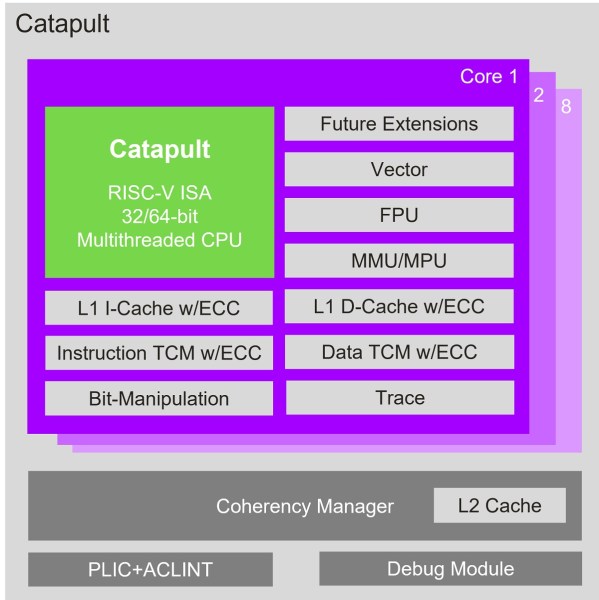 Above: A block diagram of the Imagination Technologies RISC-V CPU.

Catapult CPUs are aimed at markets including 5G modems, storage, ADAS / autonomous vehicles, data center, and high-performance computing. They are multi-threaded and come in both 32-bit and 64-bit variants and have a plethora of customer configurable options, as per application need. They can be scaled up to eight asymmetric coherent cores-per cluster for enhanced SoC versatility, with an option to add custom accelerators.

As Catapult CPUs are compliant with the RISC-V ISA they are fully supported by the broad and increasing RISC-V ecosystem of software and tools.

Calista Redmond,  CEO of RISC-V International, said in a statement, “RISC-V welcomes Imagination’s introduction of a line of RISC-V CPUs. These products by Imagination underline the growth of the RISC-V marketplace and its ecosystem of suppliers and their industry partners. Imagination demonstrates the rich and diversified opportunities that exist in RISC-V solutions targeting heterogeneous computing.”

Renesas, a big chip maker based in Japan, offered words of support.

“Renesas has a long history of working with Imagination, and its proven track record of delivering reliability, trust and innovation has enabled us to deliver market-leading automotive SoCs,” said Tatsuya Kamei, vice president in the automotive chips development division at Renesas, in a statement. “The growing RISC-V market requires a wide range of products and trusted delivery partners, as well as an increased focus on safety and security. We welcome Imagination’s new Catapult RISC-V CPU IP, which is sure to meet those criteria.”

Meanwhile, Imagination said it has a new licensing agreement for GPUs with Yadro Microprocessors, an enterprise server and storage company in the Russian market.