Microsoft showed off new details at The Game Awards about its new game: Senua’s Saga: Hellblade II. It’s set in Iceland, and it will be based on real-world scenes the Ninja Theory development team collected there.

The scene took place in dark caverns, full of black volcanic rock and steam. Senua, who suffers from psychosis, hears voices in her head as she moves and encounters a very strange-looking giant demon that is half human and half rock. Senua throws a spear and oil at the being, then transitions into a nightmare world where the giant creature pursues her.

She and her fellow warriors throw oil and burning spears at the beast cralws toward them. They run to avoid it as it emerges from the dark cave. It’s a pretty terrifying scene.

Sadly, Microsoft didn’t reveal the launch window. Geoff Keighley, host of The Game Awards, said the realistic images were real gameplay, and not a cinematic.

In a development video, Ninja Theory cofounder and Hellblade creative director Tameem Antoniades said he needed a break after the launch of the original, Hellblade: Senua’s Sacrifice, which was my favorite game of 2017. It features the main character Senua in a groundbreaking portrayal of mental illness.

Antoniades took a trip and visited Iceland, and he fell in love with the place as the setting for the sequel. He took the team on a trip there and brought along Melina Juergens, the actress who plays Senua. The team met with Quixel, which captures scenes and turns them into graphics that can be used in a video game. Epic Games acquired Quixel last year as part of an effort to bring photogrammetry into games and make artists far more efficient in creating next-generation game art.

In 2019’s teaser video, we saw that Senua in Hellblade II had gone deeper into her persona as violent warrior, as opposed to the quiet and shy person that she started out as in the early part of the game.

Ninja Theory had a very different kind of heroine in mind with Senua. They enlisted the help of Wellcome Trust, a health care company in the United Kingdom that gave the studio a grant. Their interest was in depicting psychosis, the condition where people see things that aren’t real, accurately through Senua’s adventure. The 18-month project turned into three years, as the team tried to get everything right.

The result was an astonishing game. In it, Senua embarks on a journey in the 8th century after Vikings raided her village and killed her love. She hopes to redeem the soul of Dillion by going to the Norse version of hell, Hellheim, to confront the underworld goddess, Hela. She is plagued by her own inner darkness, and in the game it manifests as externally focused visions. She must battle these phantasms to continue her quest.

Ninja Theory said the creature was a giant troll, and it relied on Ziva Dynamics for the most high-performance, real-time character creation.

The larger-than-life troll is over 40 feet tall, missing a leg, and has large flaps of skin and fat hanging from its chest and gut. According to the Ninja Theory team, this complicated asset needed to hit the highest fidelity possible, in real-time, as its massive size would magnify the details of the body and exist as a benchmark for the character quality to be expected in the full title release.

To achieve such results, Ziva Dynamics leveraged a combination of their soft tissue simulation tools and advanced realtime technology. 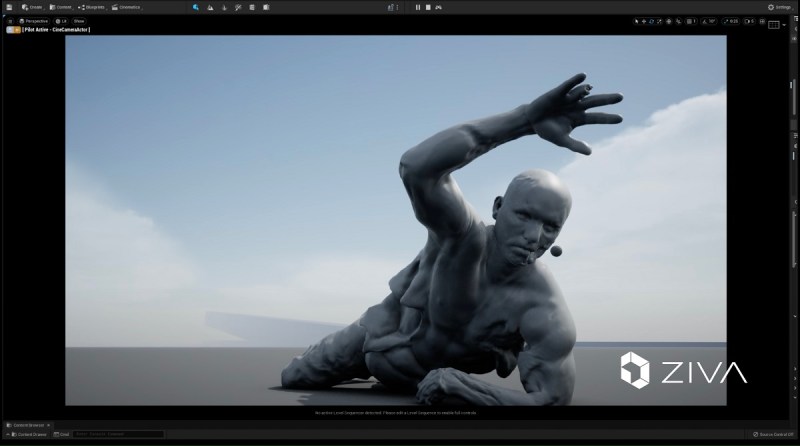 “This deadline for the troll was really right,” exclaimed Simon Clutterbuck, vice president of Creative at Ziva Dynamics, in a statement. “We had 3 artists working on it and only one month to get it all done. Building out a realistic body utilizing our existing datasets as a starting point saved us a lot of time. The tech is really changing the way our partners tackle character work.”

The Ziva Dynamics artists began by building the troll in Ziva VFX, the soft tissue simulation software. This process was expedited by a combination of Ziva’s Anatomy Transfer tools and their proprietary generic male anatomy simulation. Ziva then added the troll’s torn, hanging skin flaps to the simulation as a coupled skin pass. At this point, the asset was complete with excitable muscles, jiggling fat, and wrinkling skin, all while being over 40ft tall in world-space so accurate gravity would influence on all of those anatomy layers.

The tradeoff for the gigantic film-quality results, however, was a render speed of 6 hours per 50 frames, leading to hundreds of hours of baking on a 15 machine AWS cluster. So, to transform this large film asset into a real-time game character, Ziva fed over 12GB of performance capture data along with the high-quality Ziva VFX simulation into their Ziva Real-Time Trainer.

This technology used machine learning to train the troll asset to perform all of the animations along with novel poses in real-time while maintaining the rich dynamics of the original simulation. As a result, the final ML troll body performed at a fully-interactive frame rate of under 3 milliseconds per frame in Unreal Engine 4.26 and was ready to be handed back to the innovation-loving Ninja Theory team.

“By utilizing their latest runtime technology Ziva helped Ninja Theory bring the full fleshy horror of the Troll to life in a way conventional workflows just can’t do.” says Andrew Vidler, technical director at Ninja Theory, in a statement.