These Digits are meant to be played in-game but they also enable players to put them on sale when they choose to on Rarible and Objkt for other eligible players to buy.

Above: How Aleph.im helps Ubisoft with blockchain tech.

NFTs have taken off in 2021 as fashion designers, artists, and game companies have begun using them as new ways for monetizing things such as digital collectibles. But they have also gotten lot of pushback from gamers as well for a variety of reasons.

I asked Didier Genevois, blockchain technical director at Ubisoft, about the pushback.

“We have received a lot of feedback since the announcement, and we hear both the encouragement and the concerns,” Genevois said. “We understand where the sentiment towards the technology comes from, and we need to keep taking it into consideration every step of the way. This experiment is meant to understand how the value proposition of decentralization can be received and embraced by our players. ”

Genevois added, “We know it is a major change that will take time, but we will stay true to our three principles which are: use the tech responsibly: building a safe environment for players to get acquainted with these new possibilities; only leverage energy-efficient, proof-of-stake blockchains; and focus on meaningful value propositions for players that benefit their gaming experience.”

As the industry continues to boom, video game developers have become increasingly interested in blockchain gaming as a way to open up more possibilities for their players to engage with their favorite games.

Blockchain gaming with integrated NFTs enables players to own, and trade their own assets. It also enables game developers to generate more revenues for the same games. 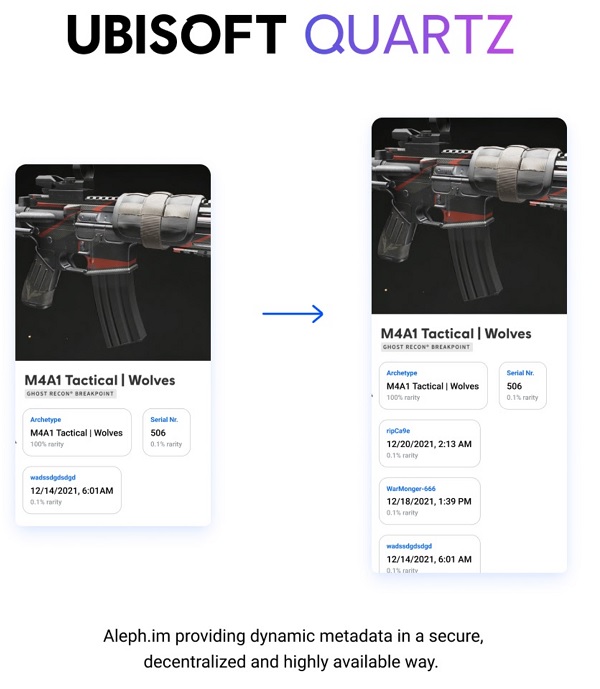 Above: Aleph.im provides some of the plumbing for Ubisoft’s first blockchain game.

Through its microVMs, Aleph.im will be able to securely store and generate the metadata of these NFTs, such as current and previous owners’ names, item description, and attached video of the object at play. This will also allow anyone to check the history of the item metadata in a trustful manner which will be incredibly useful for Rarible and Objkt.

“The incorporation of NFTs into a mainstream game is a revolutionary moment for NFTs,” said Aleph.im CEO Jonathan Schemoul, in a statement. “Dynamic NFTs have never been done before and this marks the first time NFTs will evolve over time as various players use them in-game. Aleph.im is proud to be at the forefront of this new era where blockchain technology and decentralized solutions for NFTs play a pivotal role in traditional gaming.”

The companies said that by eliminating reliance on centralized entities, NFT-backed digital assets become more efficient, secure, and private, making them less prone to hacks and other cyber-attacks.

While traditional NFTs have been mostly static and won’t change attributes based on each ownership transfer, Aleph.im’s evolutionary technology has changed the game by enabling the creation of dynamic NFTs with metadata that evolve as they transfer from player to player.

Aleph.im’s technology will allow players to see information on which players have previously owned the items they have retrieved, including player names and achievements.

“With Ubisoft Quartz, we’re taking the first step to leverage blockchain’s decentralized approach to open new opportunities for our players by making them true stakeholders of our games,” Genevois said. “To fulfill the technology’s promise, we needed players to actually own their Digit and be able to leave their mark in their favorite game. Aleph.im’s role was key in building this experiment by allowing us to decentralize the storage of the Digits’ video asset and metadata.”

Ubisoft studied this blockchain technology for four years through in-house research and development and close collaboration with renowned specialists within the startup ecosystem. Earlier this year, Ubisoft established a core channel node on the Aleph.im decentralized computer network, as the decentralized storage of the valuable metadata appears to Ubisoft as a determining factor to enable blockchain to fulfill its promise.