During Google’s biggest hardware event of the year today in San Francisco, the company unveiled the Pixel 2 and Pixel 2 XL smartphones, the Home Mini and Home Max smart speakers, the Pixelbook laptop, Pixel Buds earbuds, and more. Since most of the announced devices work with Google Assistant, the company sprinkled more than a dozen features coming to its personal assistant throughout the presentation that lasted about two hours.

Google continues to assert it is an AI-first company, and Google Assistant is at the heart of this effort. As Google hardware chief Rick Osterloh said to wrap up the nearly two-hour presentation, “Google Assistant is the primary way we bring AI to users.”

This is the most recent major update on what’s coming to Google Assistant. Others this year were unveiled at the I/O developer conference, and last month at Google Developer Days in Krakow, Poland.

Translate 40 languages on the spot

When Google Pixel Buds work with a Pixel smartphone, Google Assistant can translate up to 40 languages on the spot, such as French, Finnish, and Italian.

Translations can begin by saying, for example, “Help me speak French” and words you say in English will come out in French through the Pixel smartphone. Google Assistant can also respond to questions like “OK, Google, how do you say ‘Hello’ in Korean?” The capability to translate 40 languages far surpasses the five languages Siri can translate with the new iOS 11, which came to iPhones and iPads last month.

Pixel Buds will be able to speak with any Android smartphone with Google Assistant.

Another major change: Google Assistant can now speak in both a male and female voice. You can change your Assistant’s voice now via the settings option in the Google Home or Google Assistant apps for Android and iOS phones, and you’ll eventually be able to use your voice to do so as well. At launch, a male voice is only available in the United States.

Google joins Apple’s Siri in offering both male and female options. Major tech companies like Google and Amazon have received criticism for making their servile intelligent assistants with female voices.

Squeeze the Pixel 2 to talk to Google Assistant

“Our research team looked at dozens of ways to enable the Google Assistant, but squeezing the phone felt the most natural, satisfying, and efficient,” said Google’s director of product management Sabrina Ellis onstage.

Google is branding the ability to squeeze your phone frame to do things like mute your ringer when receiving a call or activate Google Assistant as Active Edge. HTC first introduced the feature in its smartphones as Edge Sense.

Directions sent to your phone

Now when you start a conversation with Google Assistant on your Home device about the nearest supermarket or coffee shop or another local business, if you follow up by saying “How do I get there?” Google Assistant will automatically send directions to your phone.

At the end of the day or while you’re out, if you say “OK, Google, let’s go home” Google will send directions to your phone. 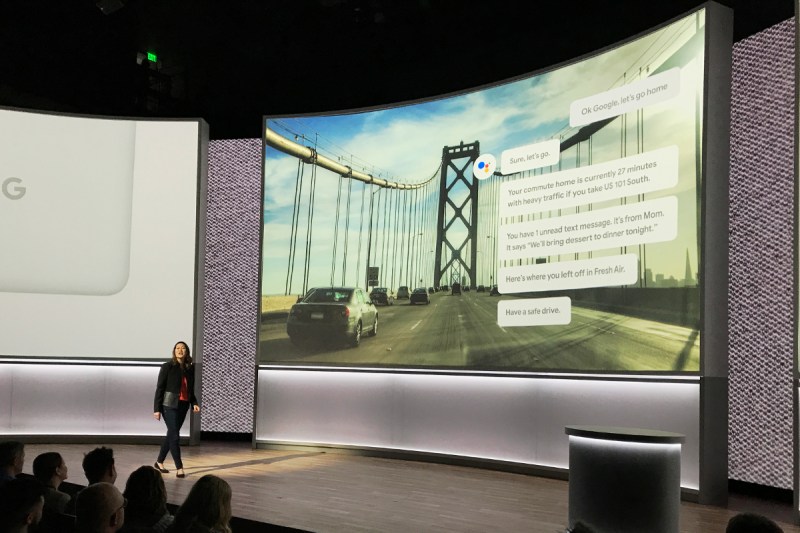 Whenever music is playing nearby and the second-generation Pixel recognizes the song, it will automatically show the artist and title on your lock screen. As VentureBeat news editor Emil Protalinski points out, this is a big step up for Google Assistant, since it currently lacks the capability to identify music on command, unlike Apple’s Siri or Microsoft’s Cortana.

Later this month, Google will launch more than 50 new ways kids can do things in Assistant, like play games or answer trivia questions. Today, using the Actions on Google platform, developers can begin making actions for kids. Alexa skills for kids came out in late August.

The new Broadcast feature for Google Home will send a single message to all such devices in your home. If you say, “OK, Google, Broadcast ‘It’s time to leave for school,'” the message would go to all other devices connected with Google Assistant, be they a Home smart speaker or more than 250 Chromecast-enabled devices.

This follows a series of attempts by Amazon to make Echo devices replace the home intercom system earlier this year. 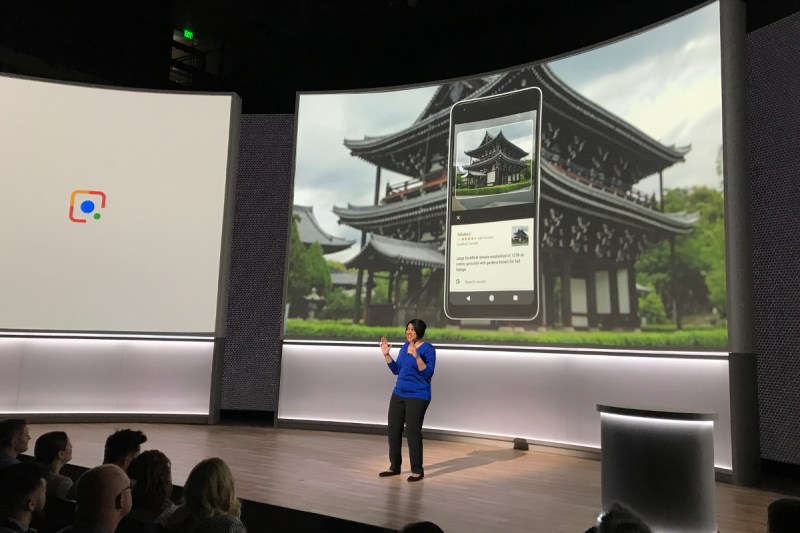 Above: Google Lens drmonstrated onstage at a Made by Google event held Oct. 4 at SFJazz Center in San Francisco

Google Lens will launch for Pixel smartphones later this year. These will be the first phones to use Lens, a computer vision and object identification services that first made its debut at I/O earlier this year. At that time, we learned that Google Lens will be able to do things like identify species of flowers or buy concert tickets by pointing your phone’s camera at a theater kiosk.

Today, we found out that at launch Lens will also be able to identify works of art and landmarks and share more information about them, or draw information like a website, email address, and phone number from flyers you point your camera at.

At Google Developer Days last month, engineer Behshad Behzadi said Lens will also be able to do things like convert currency with a camera or tell you how many calories or grams of sugar are in an apple.

Lens will also be integrated in Google Photos.

With Routines available soon, Google Assistant will be able to carry out multiple tasks with a single utterance.

As Google mentioned in a blog post earlier in the day, saying “OK Google, let’s go home” could be set up to send info about your commute to your phone, play your podcast where you left off, and send a text message to your significant other that you’re on your way.

When you get home, you will be able to say “OK Google, I’m home,” at which point Google Assistant could turn on the lights, tell you your reminders, and change the temperature.

Saying “OK, Google, good night,” could arm the security system, tell you about your first calendar event, and give you an alarm time.

Google joins Amazon and IFTTT applets in enabling users of AI assistants to control their smart home control and carry out multiple tasks with a single sentence.

Also among upgrades coming to Google Assistant, Nest can stream live video footage to any television using a Google Chromecast device. Video footage can be seen by Nest live feed cameras as well as the Nest Hello doorbell, which made its debut last month. Google acquired Nest Labs in 2014.

Video from live feeds can be displayed by saying things like “OK Google, who’s at the front door?” Amazon showed off live feeds from smart cameras on Fire TVs and Alexa-enabled devices last week.

Google Assistant users with a Nest thermostat will also be able to simply ask Google Assistant to make their home warmer or cooler to raise or lower the temperate a few degrees.

This summer Google Assistant got the capability to make free phone calls to the United States and Canada, but the calls weren’t listed as from your phone number. They were represented as No Caller ID or Unknown. Now calls made with Google Assistant will bring up your name and phone number.

Amazon announced free calls in the United States, Canada, and Mexico for the first time with Alexa-enabled devices last week.

When you say “Hey, Google, find my phone,” Google Assistant will tell you the number of phones nearby and give you the choice of which phone to call so you can locate it around the house.

In addition to on the spot translations and becoming available to Japanese consumers today, developers can now make voice apps in French, Canadian French, German, Korean, and Japanese.

Before today, Google Assistant voice apps could only be made for English speakers in the United States, United Kingdom, and Australia, Assistant product manager Brad Abrams said today in a blog post.

Most-common usage of AI assistants in homes today tends to involve things like playing music, setting timers and reminders, and controlling smart home devices, but Google Assistant is also able to access third-party voice apps. Since the launch of the Actions on Google platform last December, hundreds of apps or conversation actions have been made available like a bird sound trainer and identifier detector, eldercare services, bus or train times in major cities, and an action that reads Bible passages based on your mood.

The Google Home app got a redesign today to give people a different way to browse music and videos. The app has a new look overall, including larger cards in the Discover tab. The Listen tab appears to have been removed. Now when you open the Browse tab, you’re given the choice to check out music, TV shows, and movies. Choose music to explore music services connected to your Google Home or choose Movies or TV shows to be directed to YouTube Red or Google Play purchases.

The app has also adopted Night Mode, which can be easier on the eyes and battery use.

The Google Home app can also assign a Home smart speaker to a specific room. By assigning speakers to rooms, you could say “OK Google, turn off the office” and all the devices assigned to that speaker will turn off.

We’ll keep you posted as these and other Google Assistant features roll out.