Genetic-testing company 23andMe and the U.S. Food and Drug Administration (FDA) have had a rocky relationship.

But seven months after the FDA barred 23andMe from offering its products that predict customers’ likelihood of contracting certain medical conditions, the company and the regulator seem to be on a path toward restoring the firm’s full set of services.

Two weeks ago, 23andMe applied to the FDA for approval on a single health product that predicts a rare but serious inherited condition called Bloom syndrome. A blog post at 23andMe’s website late last week announced that the FDA had accepted the application.

23andMe has been working with the FDA to come to an understanding over how 23andMe could prove that its genetic health predictors are accurate.

The very focused application from 23andMe, and the FDA’s acceptance of it, suggests that the company and the agency have agreed on a systematic way of reviewing and approving 23andMe services. Experts say that if the Bloom syndrome product is approved, it will provide a template for future approval processes.

The warming relations between 23andMe and the FDA may be driven by the political climate in Washington.

Several bills have been introduced in Congress in recent months to limit the FDA’s power to regulate various health technologies. The Preventing Regulatory Overreach to Enhance Care Technology (PROTECT) Act of 2014 and the SOFTWARE Act from October of 2013 are the most recent examples.

A Washington D.C. source with knowledge of the situation tells VentureBeat that the FDA may be feeling pressure from Congress to justify its reasoning for barring 23andMe.

FDA physician Jeffrey Shuren, who is directly involved in the agency’s consideration of 23andMe health products, sat on a Congressional panel with 23andMe founder and CEO and co-founder Anne Wojcicki on Tuesday.

The fact that Wojcicki was invited to participate in the panel discussion may be meaningful, our source says. Congress may be sending a message to the FDA that it might consider limiting the agency’s power to regulate services like 23andMe’s.

Then, yesterday (Thursday), a blog by Shuren showed up talking in a friendly and conciliatory tone about the 23andMe service. To be fair, Shurer also stressed in the blog that any service that offers diagnostic information to consumers must prove their accuracy to the FDA.

“FDA understands and supports people’s interest in having access to their genetic information and believes such information can help them make more informed choices about their health – so long as that genetic information is accurate – that the results are correct, meaningful and written in a way that consumers can understand,” Shuren writes.

Shuren reveals in the blog that the agency’s 2013 warning letter to 23andMe came after a five-year investigation of the company’s health-related products and similar products from other companies. 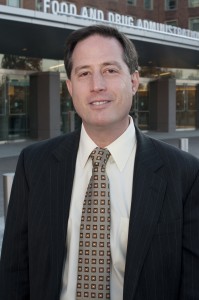 Above: Dr. Jeff Shuren of the FDC.

After testing various products, including 23andMe’s, it found the the results to be widely divergent. And, as Shurer notes in his blog, “In some cases, the risk predictions conflicted with an investigator’s actual medical condition.” All this led the FDA to doubt the safety and efficacy of genetic health services.

But Shuren hasn’t said whether or not the agency found evidence that the 23andMe results, in particular, were inaccurate.

That’s all water under the bridge now. The FDA and 23andMe have moved on.

23andMe is taking a conciliatory stance with the FDA these days, too. “The FDA has been very responsive to us throughout this process and we will continue to work collaboratively with the agency to define a path forward for direct-to-consumer genetic testing,” 23andMe communications VP Angela Wonson told VentureBeat via email.