Below are five new or noteworthy skills chosen from the Most Enabled, New, and Customer Favorites This Week categories of the Alexa Skills Store.

In Alexa news this week, Alexa skills makers got a new way to test their skills before they release them to the public, and Amazon barred developers from including ads in their skills.

This simple and strikingly valuable Alexa skill calls your smartphone when you’ve lost it around the house. No extra review or thoughts here. There’s nothing else to add. 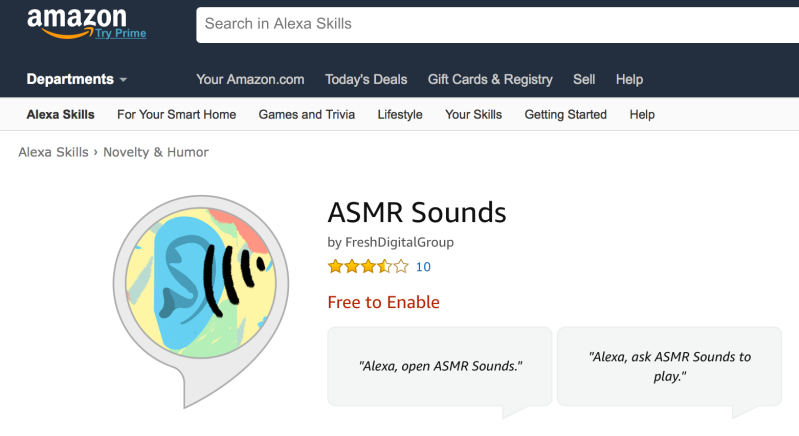 Autonomous sensory meridian response (ASMR) is a tingly sensation when people speak in a soft voice or certain sights or sounds like brushing, stretching, or petting.

ASMR Sounds is only the second ASMR skill in the Alexa Skills Store, preceded by the well-named ASMR First skill, though there are a host of soft-spoken sleep or meditation skills out there.

Ambient noise has become a kind of niche in Alexa skills, and ASMR has definitely grown popular on platforms such as YouTube. The same could someday be true for ASMR Alexa skills.

New from Mercedes-Benz for U.S. customers is the Mercedes Me Alexa skill. Both this Alexa skill and the Mercedes Me Google Assistant action launched Friday. They can lock car doors, start the car, enter navigation instructions, and more.

The Arsenal skill is designed to serve fans of the British football club. It’s a bit more complex than a lot of skills for sports available today because it’s been designed by Arsenal Football Club to serve fans before, during, and after a match. Before a match, the skill can tell you who is injured, who is in the starting lineup, and give you a pregame summary. During a match the skill can give fans the score, a summary of events thus far, or broadcast live commentary. Post-match commentary is also provided for about 30 minutes after the final whistle.

The evolution of the sports fan bot took another step forward earlier this week when the Golden State Warriors launched their bot with video highlights and a unique use of QR codes to guide fan experience — and ultimately drive concession sales in arenas as well as merchandise sales.

This is a flash briefing, so it plays any time you ask Alexa “What’s in the news?” CompliBot’s entire purpose is to give you compliments periodically between your flash news briefings, inspirational quotes, and daily devotionals.

This is by no means the first security skill on Amazon, but it may be one of the largest. ADT has more than six million customers who can now use this skill to disarm their alarm with voice and a four-digit pin number. It can also be used to lock doors, dim lights, and check the status of the home security system.