You may have heard about the Donald Trump bot army and the Twitter bots that have influenced elections in Latin America, but there are other bots out there, bots that connect citizens to services, bots that plan to crowdsource the election of a president or act as your personal assistant in government.

Bots won’t just upend business and the App Store. They’re going to change civil society, how people interact with government, and the self-governance of free societies. Here are five example of bots that have already impacted or will impact democracy.

Dirty Water VT sends a tweet each time a sewage spill occurs in the state of Vermont.

Trib IL CampaignCash sends a tweet any time a campaign contribution is made above $1,000 in the state of Illinois.

Congress Edits tells you each time an anonymous edit is made to a Wikipedia page by an IP address associated with Congress.

PermitBot tells the people of Chicago about significant construction, demolition, renovations, and other building permit activity greater than $500,000.

This one was made in 2014 by Chris Hagan, a data reporter at WBEZ. After he moved from Oregon to Chicago, one of the first places friends encouraged him to visit was Open Gov Hack Night. There he met Steve Vance of civic tech startup Chicago Cityscape, and together the two build the bot that monitors building permit activity in the third-largest city in the U.S.

Follow PermitBot, and you can see changes to the face of the city and trends like teardowns — when multi-family homes are demolished to build single family homes — or when a school shuts down.

“That’s still one of the things I do every morning,” Hagan said about watching the latest PermitBot tweets. “When you show up in the morning and see 20 tweets, you know something is going on.”

Hagan’s open-source bot and Ed Summer’s Congress Edits Twitter bots can be used to track tickets, complaints filed with the city, or other sorts of city or government data.

ManyChat is a simple-to-use bot maker that requires no knowledge of code. Mikael Yang said his bot builder has created more than 100,000 bots on Telegram, as well as bots on Facebook Messenger.

His company’s bots focus on giving businesses, nonprofits, celebrities, politicians, and the rest of the world a one-to-many broadcasting tool. A platform to track audience analytics and promote engagement is due out in fall 2016, Yang said.

Hillary Clinton, for example, could share her latest news or opinions, understand what percentage of her fans are for or against a certain policy, and target her most-engaged audience members.

“Now Hillary can target those really engaged users. She can say ‘ManyChat, give me all my audience members who are super engaged with my content in San Francisco and send them this message: Do you want to be a volunteer at my next rally?’” Yang said.

“We are not about creating chatbots or character bots. There are great companies like Sequel and Pullstring who are doing that, and they are great at that. We are about engaging audience at scale through the means of Facebook Messenger and other messaging platforms in the future,” he said. 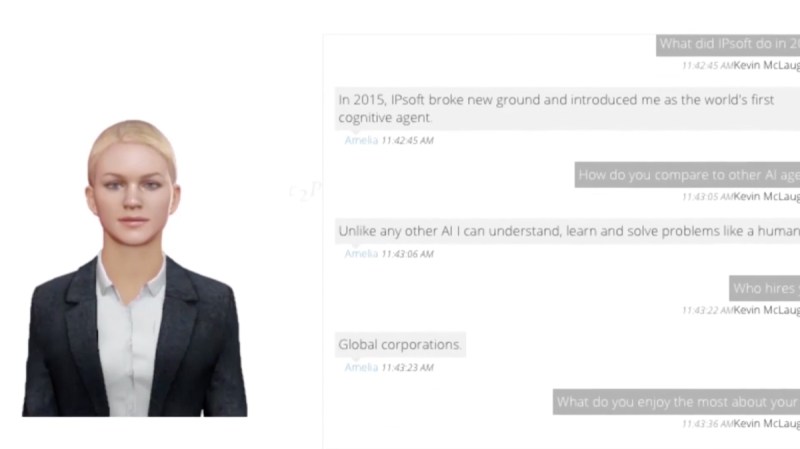 “I think there’s a perfect marriage possible between government and cognitive technologies like Amelia to provide better, faster, and cheaper service,” said Frank Lansink, CEO Europe at IPsoft, in this video.

4. Crowdsourcing the next president of France

The Victoire de La Primaire bot on Telegram wants to elect a 2017 presidential candidate without an established political party. All French citizens are eligible to nominate or vote for a candidate. Voters answer a series of questions to establish their eligibility to vote and to confirm their identity. Debates and campaigns will be held between the candidates who receive the most votes, and a candidate for the ballot will be selected in December.

More than 50,000 voters have signed up thus far, the bot’s maker told VentureBeat.

The success of this bot has inspired some on Twitter to imagine similar bots to fill out taxes, or file for food benefits or Medicaid. Code for America seems to like the idea.

This chatbot has saved people millions in parking tickets

The rising billions — or three to five billion people expected to come online by 2020 — are part of the biggest period of mass adoption in world history.

This increase is going to change the workplace and software, but bots are also changing how people learn about their rights, monitor significant data in their community, access services, and elect candidates. These bots, or the ideas behind them, will increasingly shape the way people interact with government and will have a real impact on democracy soon and in the future.