This week’s selection includes presidential candidate bots that help you get educated about the issues, a bot-powered detective mystery, and a bot that helps sneakerheads stay on top of the latest candy-colored dream.

You know when one of your favorite musicians releases an album and you want it to be amazing, but it ends up being a disappointment? That’s sort of how I feel about Bits, the sneakerhead bot. I so want this to be a good bot. I’m not a sneakerhead, but I get the appeal. A chat interface seems like a great way to deliver the slow trickle of sneaker release dates, community chatter, and shakeups in the sneakerhead stock market StockX.

The use case is solid, but unfortunately the execution of this bot is less so. Bits has a limited selection, and August 4 was the most recent release date listed.

I’m excited to see this bot evolve, along with the general concept. It seems like a great use case to watch, as entrepreneurs with bots find ways to serve niche markets worth hundreds of millions of dollars.

Bits is available on Facebook Messenger and Telegram and was made by Lisbon-based bot maker Pedro Pinto.

FutureStates was made by Andy Angelos to introduce you to the policies of major party presidential candidates Hillary Clinton and Donald Trump, as well as Independent candidate Gary Johnson and Green Party candidate Jill Stein.

This bot appears to be quite thoughtful. It incorporates major issues associated with each candidate and takes time to gauge your familiarity with, say, the Green Party before responding to your queries. It draws on speeches, public statements, and campaign websites to answer your questions. 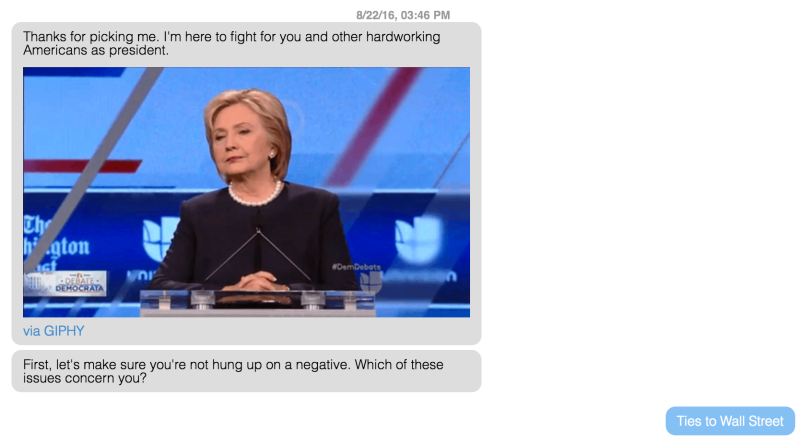 Since the bot attempts to answer specific questions you might ask and relies less on pre-set buttons, it seems smarter than the average chatbot. Unfortunately, it often fails to correctly answer questions.

Ask Donald Trump’s or Hillary Clinton’s bot “Why won’t you release your tax returns?” and you will get an answer about the candidate’s tax policy. As is typically the case with bots, a single-word response or query works a little better.

For example, type “economy” or “gun control” and you get a fairly accurate response.

FutureStates shares the occasional video clip, but what would be really helpful is if each response came with a link to source material. That way you would have a better understanding of the issues and the ability to read or listen for deeper context.

BFF Trump does that one thing I hoped to get from FutureStates.

Click “Really??!” when chatting with BFF Trump and you’re taken to the source material of the statement, be it a tweet, video, or news article. Especially helpful: Videos cited bring you right to the moment of the quoted statement.

“Facebook engagement algorithms can skew the kinds of content millennials are receiving, which made us realize: Trump, the real Trump, was missing in the news feeds of the politically disengaged,” the bot’s creators said in a statement shared with VentureBeat last week. “The answer was to bring actual Trump quotes to Facebook Messenger.” 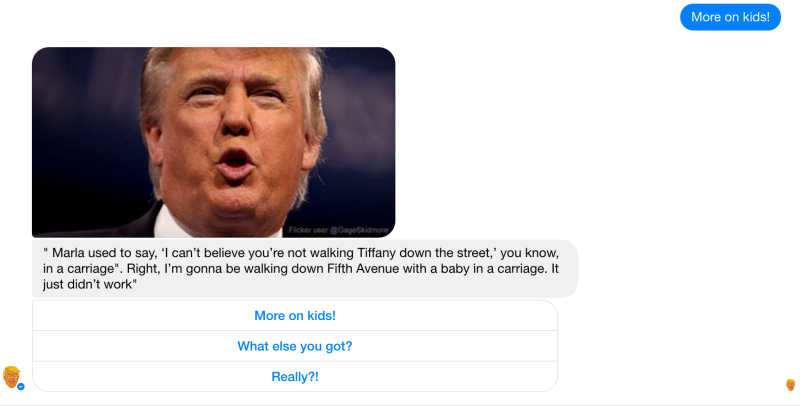 VentureBeat has written about several chatbots inspired by Donald Trump in the past, and very few of them actually tell you the source of the cited information, so this is a step in a positive direction.

That said, the entire purpose of BFF Trump seems to be to tell you outrageous things Donald Trump has said, so the bot may not have been made by people supportive of a Donald Trump presidency.

Although I started out less-than-impressed by this bot, it succeeded in teaching me a few new things about Donald Trump.

But it was actually a little more fun when BFF Trump sent me down the rabbit hole of Trump’s thoughts on Katy Perry’s love life.

You can also look at the candidate’s views on kids, where you’ll learn that Trump does not change dirty diapers or push baby strollers.

BFF Trump was made by New York creative agency SS+K and Dexter, a bot platform that received $2.3 million last week from assorted investors, including Betaworks.

Sensay connects more than one million strangers who want to give or get advice on Facebook Messenger, Kik, Slack, and SMS.

Do an especially good job giving advice and you may receive Sensay tip coins. What do they do? Nothing really; they have no redeemable value. 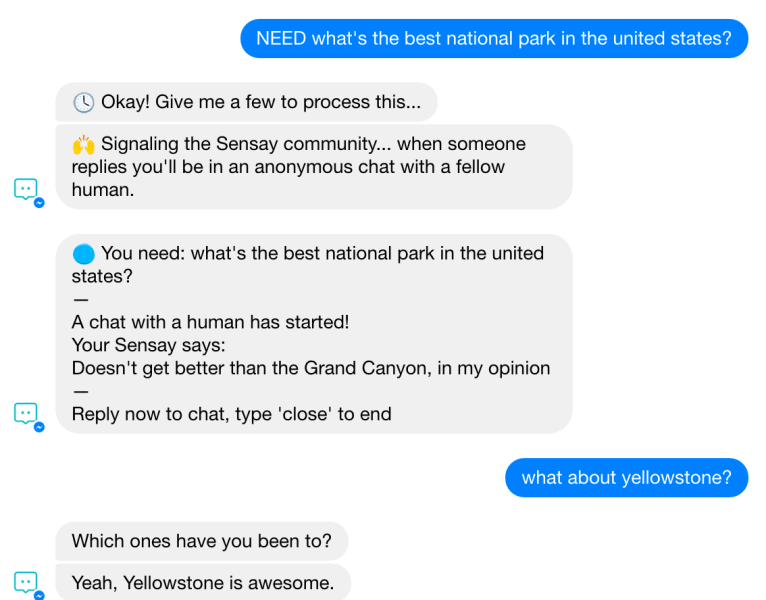 In some instances, the bot failed to find me someone to chat with or I asked a question and received no response, but when it did work I saw the immediate value.

There’s no rating system, like the kind you get when measuring an Amazon or Ebay reseller. You have no idea if the advice you’re getting is good or bad. For example, when I asked for a good Chinese food place in San Francisco, I was told Hunan Homes because “the name sounds like ‘Hunan Homies’ and that makes me laugh.” A name that makes you laugh may not be the best way to judge culinary prowess.

I use Sensay, and I want to know how many coins a stranger has received and how to keep in touch with strangers I find especially knowledgable. Seems like low-hanging fruit for a bot that raised $4.5 million earlier this month. Even in its current state, Sensay is definitely a bot worth trying. Keep an eye on this one.

This is a run at a very specific area in the bot realm: chat episodes and character bots.

Fixer maker Sequel has been enthusiastically building bots with personality.

Sequel is joined in this chat character space by companies like Pullstring, whose Call of Duty bot exchanged more than six million messages in its first 24 hours online, and Disney accelerator-backed Imperson.ai, which experimented with Miss Piggy chat episodes on Facebook Messenger this summer. Both Sequel and Imperson partnered with Kik when the messaging app created its Bot Shop in April.

The Fixer puts you in the shoes of a detective who just had a new case walk in the door: a cheating wife whose degenerate gambler lover is in trouble for “stealing a Tibetan mastiff from the richest family in town.” 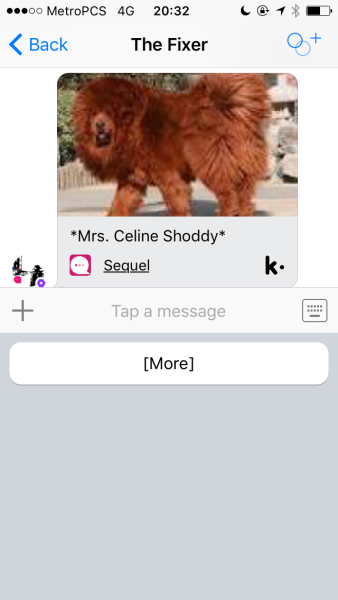 Above: That missing Tibetan mastiff.

There’s some witty banter and good writing here, but banter isn’t always witty when it’s choreographed with a single button. There’s no choose-your-own-adventure feel, but character bots, like other bots, are barely out of their teenage years.

Bot detectives have received actual crime reports from actual people, so clearly buttons don’t negatively impact the experience for everybody. The Fixer is okay, but Sequel Stories is a better experience.