Robots could be responsible for the loss of millions of jobs by the year 2020 as part of the “fourth industrial revolution,” according to a World Economic Forum report from January, with customer service, health care, packing, and shipping just some of the industries likely to be affected.

Whether or not your next CEO is a robot, we’re now seeing some of the early signs of what the future holds in a world controlled by automated machines. As is becoming increasingly clear, robots will take many forms — they can be self-driving cars, ground drones that deliver pizza, bizarre oblong designs that ensure grocery store shelves are always stocked, or social companions that resemble a lamp.

For many, however, the word “robot” usually conjures images of human-like beings, with a head, eyes, and maybe arms and legs too. And that’s why a new exhibition at London’s Science Museum is particularly interesting, as it serves as a recap of some of the historical and current interpretations of what a humanoid could or should look like.

Running until September 3, 2017, the Robots exhibition is touted as “the most significant collection of humanoid robots ever,” with more than 100 on display. Here are five of the freakiest.

Robots begins with a runthrough of some of the historical instances where people have tried to give life to inanimate creations, including a 500-year-old “Automaton monk” attributed to Italo-Spanish engineer, mathematician, and clockmaker Juanelo Turriano.

Built from wood and iron, the 15-inch-high “robot” is powered by a key-wound spring that enables the monk to walk, roll his eyes, turn his head, raise his arms, and beat his chest. 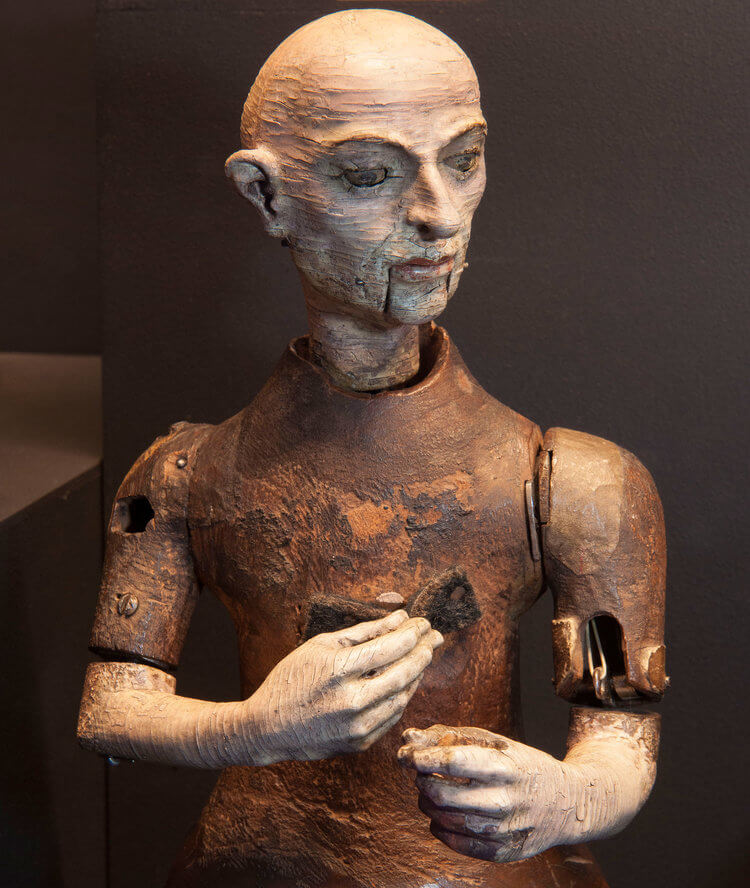 Perhaps the most disturbing robot on display, from a visual perspective at least, is the Telenoid, produced by Hiroshi Ishiguro Laboratories in 2010 in partnership with Osaka University and Advanced Telecommunications Research Institute International (ATR).

With truncated arms and legs, the robot is akin to something from a horror movie, but this so-called “minimalist” design was to make it like a human except without any features that could determine it as male or female, young or old. However, those in control of it can capture their own voice and movements and project them through the Telenoid to those in a remote location. It’s designed to “teleport” the operator, in lieu of technology that can actually teleport them. 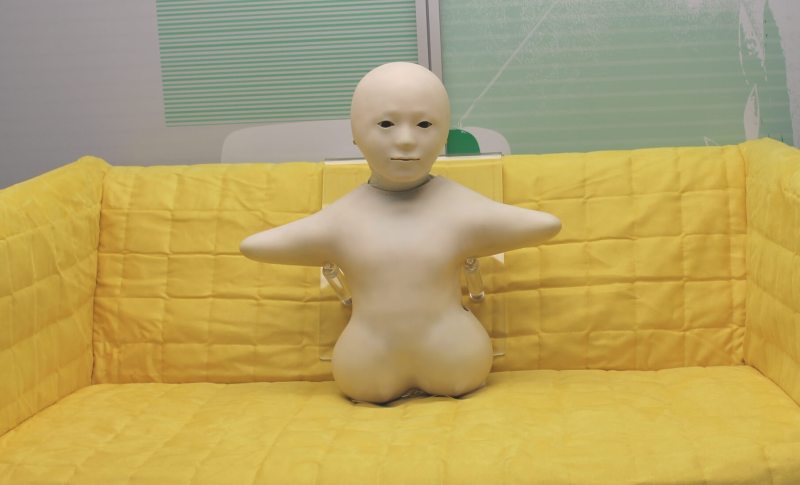 Visitors to the exhibition are first greeted by this fairly creepy animatronic baby, sporting latex skin under which three dozen metal joints operate. This was actually provided as an example of how robots are used in the movie industry, but it still serves as a reminder on how terrifying human-like robots can be — especially when represented as an infant. 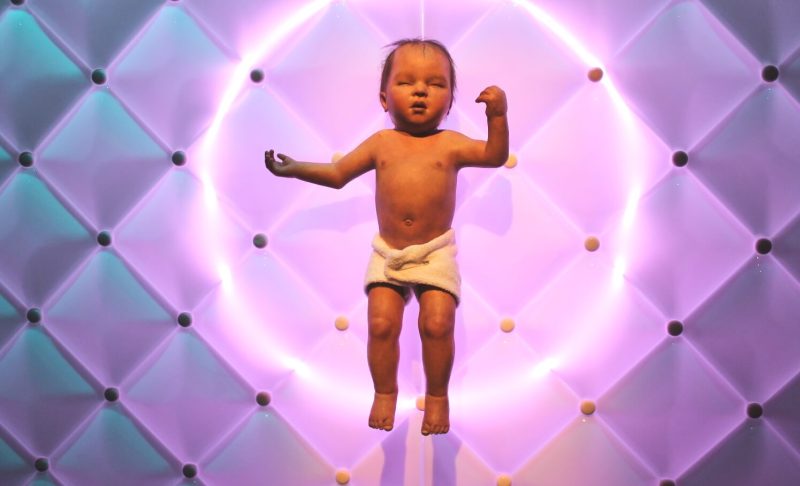 Above: The animatronic baby

Developed by the University of Hertfordshire in England, Kaspar is a good example of the growing demand for social robots for use in health care.

The small humanoid was designed to improve the lives of children with autism and similar communication difficulties, using “facial and body expressions, gestures and speech” to interact with children by responding autonomously to touch through embedded sensors. It’s no doubt a great program, but Kaspar’s deeply sunken eyes may freak some people out. 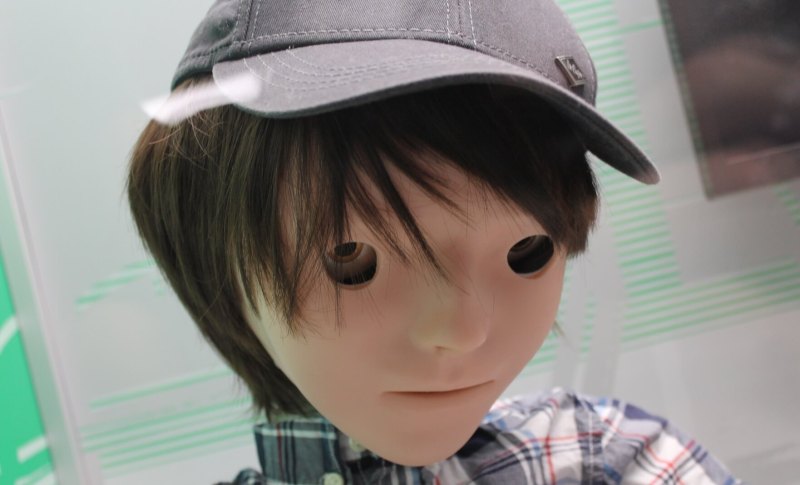 Above: Kaspar, a robot to help autistic children.

Similar to the Telemoid, the Kodomoroid was developed by Hiroshi Ishiguro Laboratories, in 2014, and has previously been demoed as a humanoid newsreader. What’s perhaps most freaky about the Kodomoroid is how human-like it is — of all the robots on display, this certainly came closest to fooling me. It’s made of silicone and artificial muscles that are kinda like the real deal. 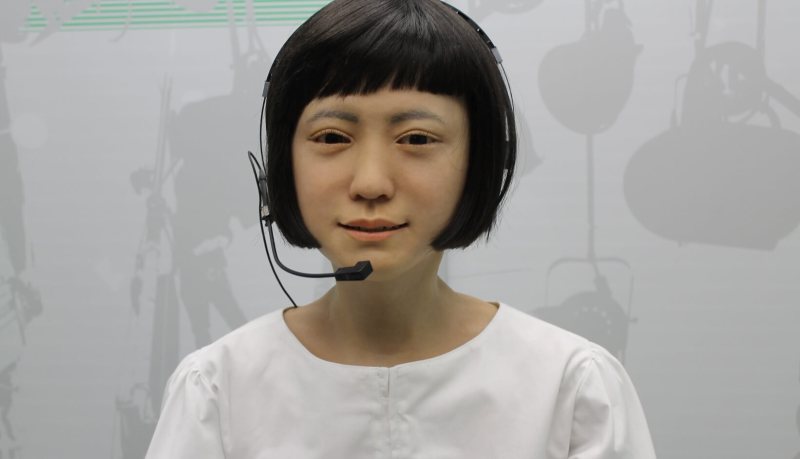 Above: Kodomoroid: A humanoid newsreader

The future of robots

Artificial intelligence is accelerating at a rate of knots, and in conjunction with advances in physical humanoid development, it’s conceivable we could have pseudo-humans, more or less indistinguishable from people, in the not-too-distant future.

But this raises an important question: Will people want their humanoids to look like, well, humans? There are some scenarios where it may make sense — for example, that project to help autistic children. But oftentimes it feels as though robots should appear like robots — or, at least, not pretend to be human.

A few examples include: 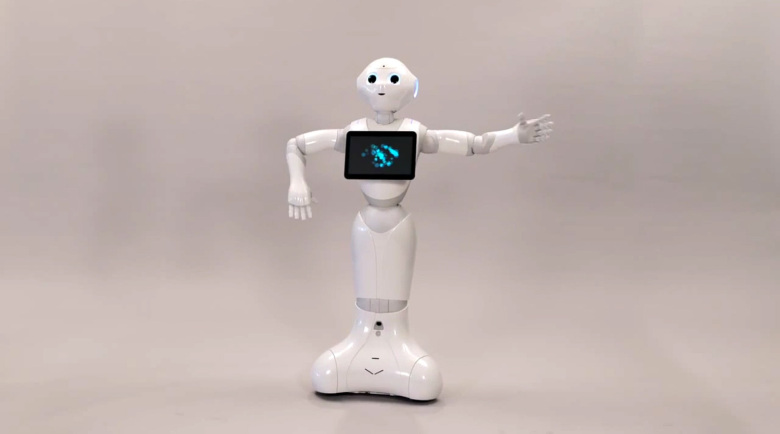 Above: “Pepper” by Softbank

Elsewhere, France’s RoboCare Lab has previously launched a campaign to place toy-like robots in nursing homes and schools across the country. 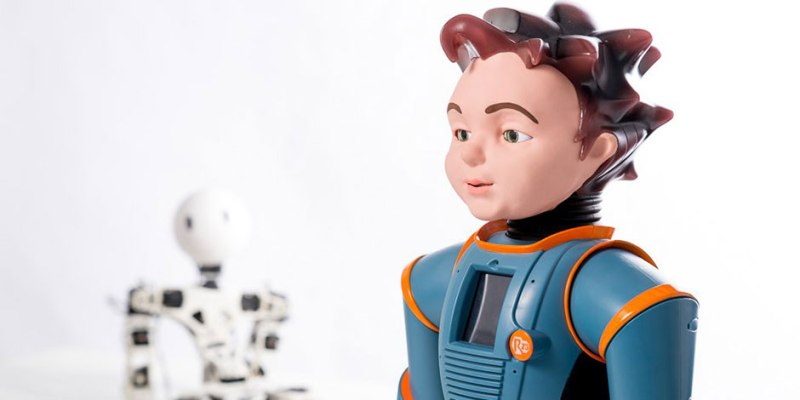 Above: RoboCare wants to put Milo in nursing homes and schools.

And last month, Israeli startup Intuition Robotics emerged from stealth, touting itself as a company “developing social companion technology to positively impact the lives of millions of older adults.” Its main product is ElliQ, an AI-driven companion that looks neither human nor robot. It looks more like a lamp. 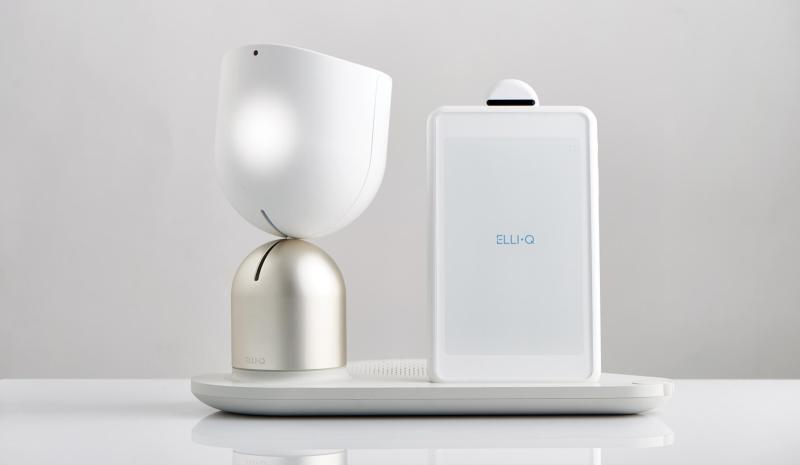