Big data firms like Cambridge Analytica made headlines when they claimed to sway Election 2016 results. They deduced personality traits from social media profiles and third-party data firms and served highly manipulative ads to sway public opinion. Leveraging a trove of data points — such as your shopping habits, magazine subscriptions, Facebook likes, and up to 5,000 other inputs — Analytica built predictive personality models for 220 million adults in the U.S.

These highly detailed dossiers enabled Analytica to do “behavioral micro-targeting” based on your personality. But the firm is hardly the only one that does so. Fortune 500 brand marketers, digital advertisers, and analytics firms of all sizes analyze social media and public feeds for better opportunities to influence consumers. Early research shows that personality targeting garners up to 63 percent more clicks on Facebook ad campaigns.

If you’re active on Twitter or Facebook, you might want to know exactly what your social media feeds reveal about you that advertisers can potentially exploit. Lyle Ungar, professor of computer science at University of Pennsylvania, spent his career developing statistical and machine learning approaches for extracting insights from text, with a focus on correlating your Twitter and Facebook utterances with your health and well-being. At the recent AI By The Bay conference, he shared many of his insights with the rapt audience.

After years of studying your social media behavior, here are 5 predictions Ungar and his team can make about you and your community from your public feed.

1. Your age and your gender

Women are from Venus and men are from Mars. This distinction is even more drastic when you analyze the vast gulf between how the two genders use language on social media: 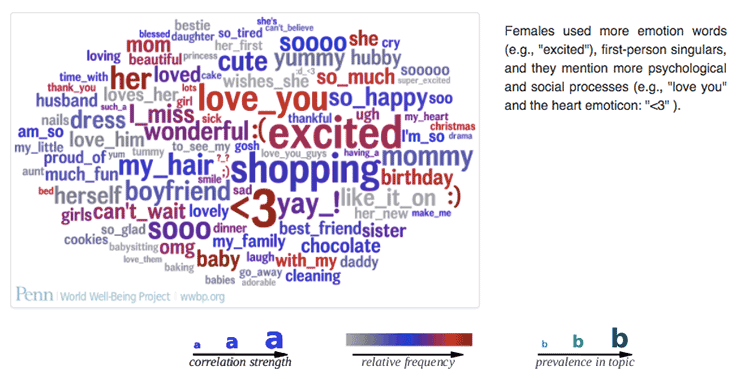 Men, on the other hand, heavily use swear words and video game terms like “xbox”. They also use the possessive “my wife” and “my girlfriend” while women simply use “husband” and “boyfriend”. Age also dramatically changes how you express yourself. Here’s how even similar phrases like “wonderful” and “excited” change as you mature. 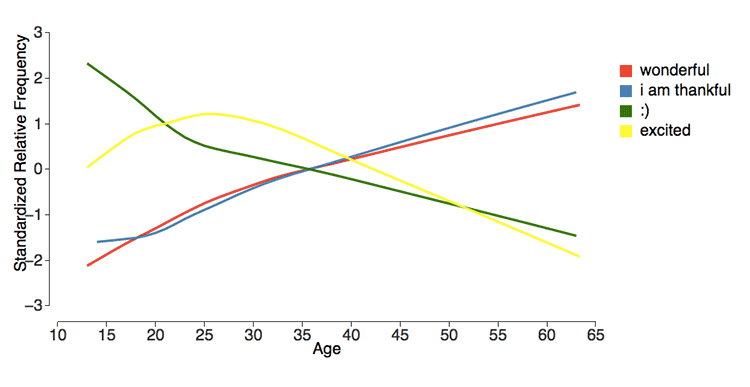 Ungar and his team analyzed 75,000 Facebook profiles from the MyPersonality project for this study. If you’re feeling curious and brave, try the age and gender predictor on Ungar’s website to see how accurately his predictive models work for you.

While Myers-Briggs may be popular, the Big 5 personality traits of openness, conscientiousness, extraversion, agreeableness, and neuroticism (also known as OCEAN) show higher predictive value for real behaviors. Personality is not physics, where you can compute answers to multiple decimal points of accuracy. At best, researchers have found weak positive or negative correlations when tied to real predictions.

If you’re wondering how you score on the OCEAN test, the IPIP-300 is one of the more comprehensive tests available on the net. Or you can just let Ungar analyze your social media profile.

As with gender and age, personality traits manifest quite differently in the language we use. Apparently extraverts can’t wait for the party, while introverts are obsessed with anime, manga, the internet, and — of course — Pokémon.

Even the profile pictures we choose reveal our personality traits. People with high levels of Openness are most likely to have artsy and non-conformist profile photos that aren’t of their face. They also have better aesthetic sense, choosing higher quality photos with high contrast, sharpness, and saturation. On the opposite end, people with high Conscientiousness tend to do what’s expected: post a frontal shot of their face, and only their face. Extroverted folks tend to post photos of themselves with other people.

If you’re not connected with someone on LinkedIn, you might not be able to see their profile and current occupation. Turns out that the words they use publicly on Twitter could reveal this information implicitly.

This is not entirely surprising. Executives typically write about business or financial news, while less senior employees spend more time talking about personal interests rather than job-related topics. Ungar’s colleague Daniel Preotiuc-Pietro and his team were able to classify occupation more accurately than alternate methods by analyzing word clusters on Twitter. 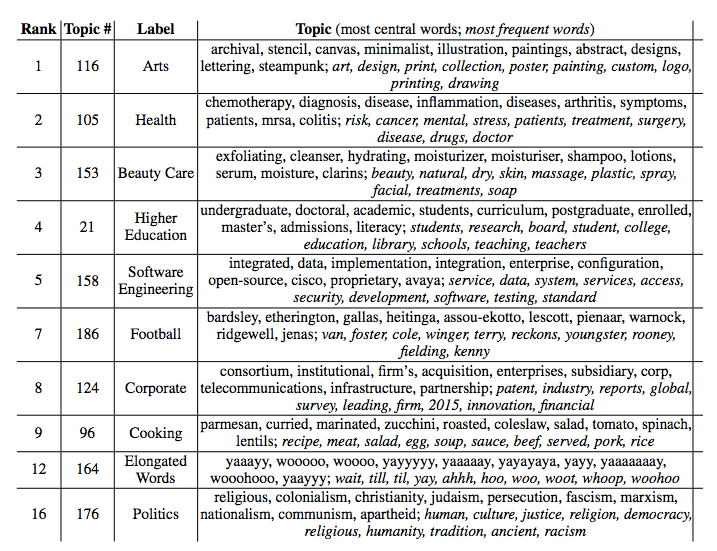 4. How narcissistic and psychopathic you are

Turns out you can filter out creeps by their social media language. Narcissists seek prestige, status, and admiration from others. Psychopaths lack remorse, sensitivity, and are unconcerned with morality. Machiavellian types intentionally manipulate and exploit others to get their way. These darker aspects of human behavior can be combined into the so-called “dark triad.”

As expected, psychopaths employ more aggressive and violent language, such as “killed” or “furious,” and terms of negative emotion. Machiavellians feature a larger percentage of spam or advertisement posts. 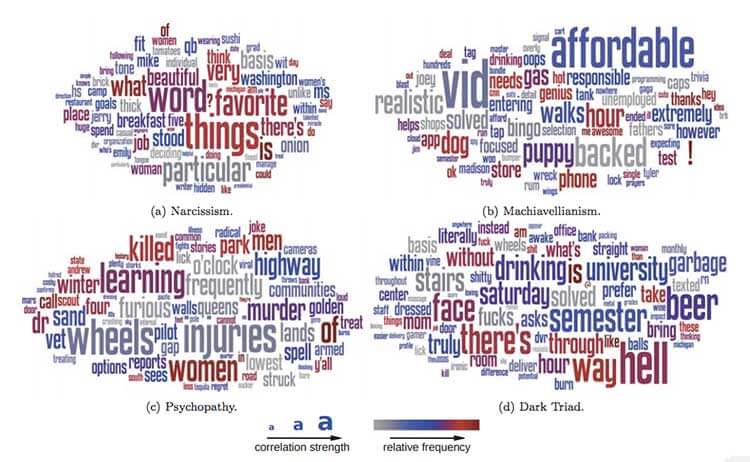 Behaviors can also be analyzed for correlations with these traits. Narcissists are more likely to have geo-enabled tweets and less likely to have duplicated posts or hashtags, suggesting a careful curation of their Twitter feeds.

5. How likely you are to die from heart disease

In a 2015 research paper, Ungar and his team describe a model using only Twitter data that can predict mortality rates from heart disease more accurately than a model combining all traditional factors, such as your demographics, socioeconomics, and health risk factors like smoking, diabetes, hypertension, and obesity.

Heart disease is exacerbated by hostile relationships and chronic stress. Ungar and his team tracked language that reflected negative social interactions, negative emotions like anger, and disengagement from society and work. These markers turned out be to better predictors of cardiovascular mortality in communities.