With the arrival of iOS 11 Wednesday, iPhone and iPad users now have a new version of Apple’s mobile iOS operating system, and it comes with a lot of new features like personalized Siri suggestions, ARKit for augmented reality apps and games, an App Store redesign, and a new version of iMessage.

iOS 10 was the first iteration of iMessage to introduce an iMessage App Store, bringing apps, stickers, and games into conversations, and as we move from 10 to 11, there are some serious improvements to note. Here are a few things to like about the latest version of iMessage. 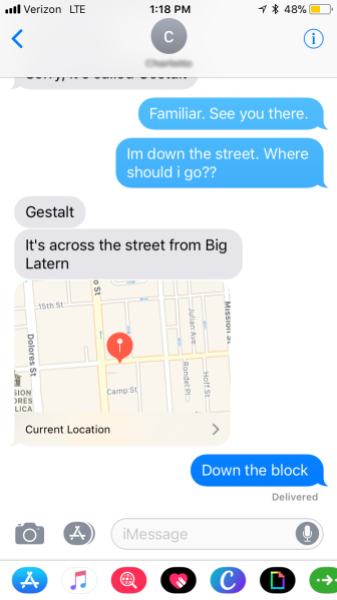 This is one of the biggest changes and one of the easiest to spot. Instead of dozens of apps in a drawer at the bottom of the screen in rows of four, the app drawer is now streamlined into a single row. On one side of this row are apps you marked as favorites, and on the other side are some recently used apps. You could sort favorites in iOS 10 too, but this approach to the iMessage interface is less cluttered. It has a quality-over-quantity feel to it.

If you take a moment to move your favorites to the left side of that little bar, any time you tap the App Store button — the only button on the interface beyond the camera and audio recording — you can see your seven favorite apps. You can have a total of 20 apps in the drawer. All other downloaded apps are listed in the “More” section, if you scroll far enough to the right.

Touch the row of apps and they magnify, not unlike how scrolling over the top of your dock on a computer with macOS can make app icons bigger when you need them.

The App Store is more visible and focused

You may be able to pick your favorites app for the drawer at the bottom of the screen in iMessage, but the one app that never moves is the App Store. Tap the App Store icon and you will see one icon is glued to the far left of the drawer, and another is wedged between the camera icon and the area where you type text. The App Store icons are immovable anchors in iMessage, as it should be if Apple wants adoption from users and developers making iMessage apps and app extensions.

Nothing else gets this treatment in iOS beyond the phone and iMessage apps, the two green immovable objects on every iOS home screen. 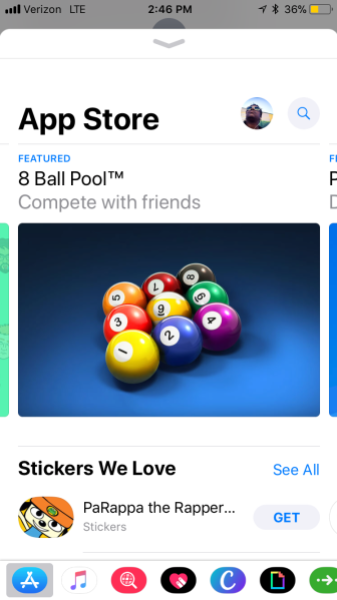 Also new for iMessage: Like the iOS App Store, the iMessage App Store has been revamped. Instead of giving you topics to choose from as you could with iOS 10, in iOS 11 the store is limited to apps featured by Apple, along with lists of Top Paid and Top Free apps and stickers. This approach does a bit to reduce the confusion that iOS 10 wrought by making little distinction between stickers and apps in the previous App Store.

This might seem minor, but it’s definitely a positive development that Apple chose to remove Digital Touch from the iMessage screen and make it available as an app instead. Before, Digital Touch was wedged between the camera and App Store icons next to the area where you type text.

The ability to create an animated heart with Digital Touch and other effects was fun for a while, but it also felt like a novelty, something unnecessary that was taking up valuable real estate.

Last week at an event to reveal iPhone X , iPhone 8 and Apple Watch Series 3, the company also debuted animojis, emojis that can be animated based on your facial movements and expression. Animojis can also be sent as recordings in iMessage that include the sound of your voice. The 12 animojis available at launch are exclusively available on the iPhone X, whose front-facing camera utilizes new Face ID technology to do things like unlock your phone or authorize Apple Pay payments. Or, apparently, translate your face into a cartoon poop emoji.

Finally, the iMessage feature Apple seemed most excited about in presentations at WWDC in June was peer-to-peer payments with Apple Pay. Now you can send friends money the same way you can with Venmo or Square Cash without the need to leave iMessage. Apple Pay Cash for iMessage will not be available at launch of iOS 11 this week, but rather in an update later this fall, Apple announced Monday. 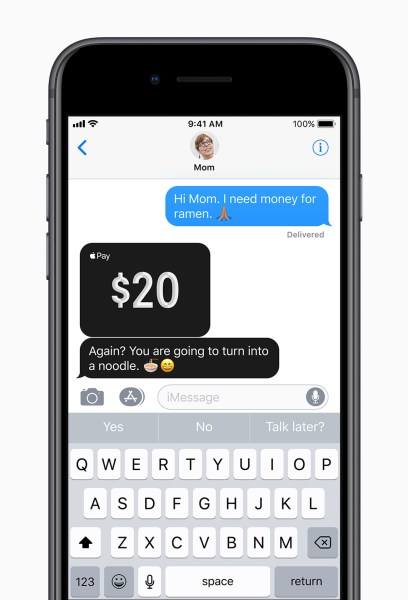 Above: Apple Pay in iMessage