Ahead of the release of Call of Duty: Infinite Warfare in five days, Activision launched a Facebook Messenger bot that acts as a tour guide in a choose-your-own-adventure trip through the game.

The Terminal Tours Messenger bot and tour guide Alana use conversation and a series of GIFs to bring you to places the game will take players, such as Mars and the moons Titan and Europa.

Alana is played by Kate Micucci, best known for her work in the TV shows Scrubs and Garfunkel and Oates.

“It’s a fun escape that gives you a chance to explore the new game, interact with the tour guide Messenger bot, and unlock some new Easter eggs that we think fans will enjoy in the days leading up to our launch on Nov. 4,” said Activision VP of consumer engagement Monte Lutz in a press release sent to VentureBeat.

This is the second bot launch for Activision this week and the second for Call of Duty: Infinite War.

On Tuesday, Activision-Blizzard rolled out a chatbot to give game fans a peak at Hearthstone: Heroes of Warcraft. 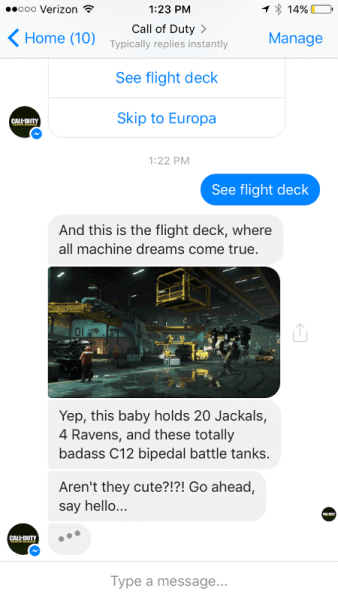 Activision worked with Facebook and AKQA and the Pullstring bot creation platform to create Alana and Lt. Reyes, a character in the first-person shooter.

In addition to its Facebook page, Activision directed players to the Lt. Reyes bot through Nuk3town, a popular map in last year’s Call of Duty: Black Ops III. Those who put together the right clues were able to earn a link to Infinite Warfare’s trailer, GamesBeat’s Dean Takahashi reported.

Activision partnered with Facebook Messenger to be one of the first brands to test Messenger’s sponsored messages ad format to re-engage fans who participated in the original bot experience in May, an Activision spokesperson told VentureBeat.

“The success of Activision’s Call of Duty bot for Messenger was exciting — it demonstrated that people want to interact with the brands and businesses on Messenger,” said Stan Chudnovsky, Head of Product at Facebook Messenger in the press release.