Full Photoshop CC for the iPad wasn’t the only thing Adobe announced at its Max conference in Los Angeles this morning. The San Jose company also took the wraps off a new version of Adobe XD — its user experience design app — with enhancements on the voice assistant design front plus tighter integration with Adobe’s broader Creative Cloud collection.

The latest release of Adobe XD supports voice prototyping, with a suite of tools aimed at streamlining development for in-car navigation systems, mobile devices, and intelligent assistants such as Amazon’s Alexa, Microsoft’s Cortana, and the Google Assistant. Voice commands can now be used as a trigger — when you preview a prototype, you’ll be able to kick off an associated action from an utterance. And speech playback can be included as an action within prototypes. Specifically, you can add a response and use XD’s built-in text-to-speech engine to preview it as it’s triggered.

Additional languages and new voice personas will hit XD in the coming months. 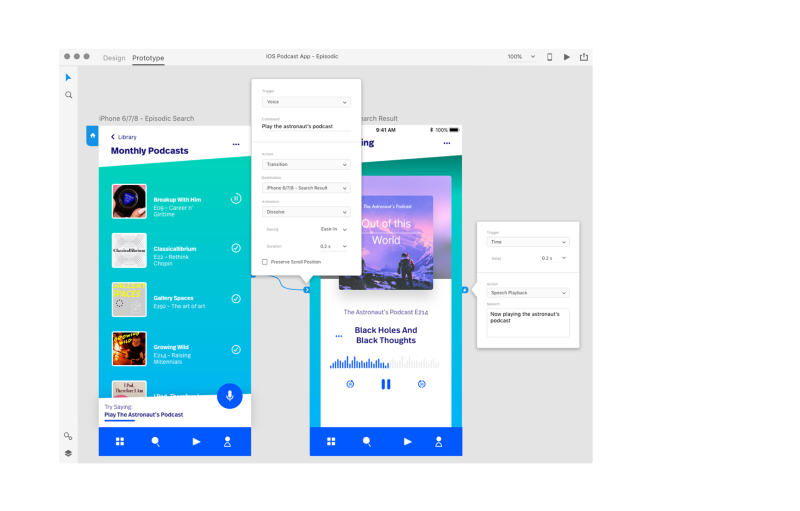 APL, for the uninitiated, was unveiled in September alongside 11 new and refreshed Alexa-enabled devices. It enables developers to build skills with text, audio, video, and HTML5 that connect with TVs using Fire TV, Fire tablets, Echo Show, and Echo Spot.

Among the new Adobe XD’s other spotlight features are Auto-Animate, which allows you to create animated transitions by duplicating an artboard and applying an Auto-Animate action, and Drag Gestures, which simulate the drag experience of touch-enabled devices like smartphones and tablets using a track pad.

Last, but not least, it’s now possible to export UI animations, presentations, and other content with layers, vectors, and artwork from DX to Adobe After Effects. Adobe Illustrator integration is on tap — you can open documents directly within XD without losing layers, artboards, or symbols. And frequently used symbols like sticker sheets and style guides now remain linked between programs and documents (you get update notifications every time a change to a shared symbol has been made).

“Introducing these initial … capabilities provides designers with a new way to design that has never been possible with any other tool on the market before today,” Adobe wrote in a blog post. “As immersive technologies … play an increasing role in digital experiences … creators need increased access to these new mediums to incorporate them into the design process.”