With some analysts predicting as many as 10 million self-driving cars will hit the road by 2030, it’s no wonder the lidar market is projected to be worth $1.8 billion in just five years. Lidar — sensors that measure the distance to target objects by illuminating them with laser light and measuring the reflected pulses — form the foundation of a number of autonomous car systems, including those from Waymo and Uber.

But not all lidars are created equal — or so argues AEye, a five-year-old San Francisco startup with an innovative sensor technology it claims can exceed the range and scan rate of traditional lidar. Today the startup announced a $40 million Series B funding round led by Taiwania Capital, with participation from heavy hitters like Intel Capital, Airbus Ventures, and Tyche Partners, in addition to undisclosed “multiple global automotive OEMs, Tier 1s, and Tier 2s” to be announced at the Consumer Electronics Show in January. This round brings AEye’s total raised to just over $61 million.

AEye cofounder and CEO Luis Dussan said the capital would be used to “scale AEye’s operations” and to meet global demand for its products in Europe, North America, and Asia.

“This funding marks an inflection point for AEye, as we scale our staff, partnerships, and investments to align with our customers’ roadmap to commercialization,” said Dussan. “Our strategic relationship with Taiwania will serve as a gateway to Asia, with valuable manufacturing, logistics, and technology resources that will accelerate our ability to address the needs of a global market. We intend to launch our next generation product at CES, which we believe will help OEMs and Tier 1s accelerate their products and services by delivering market-leading performance at the lowest cost.” 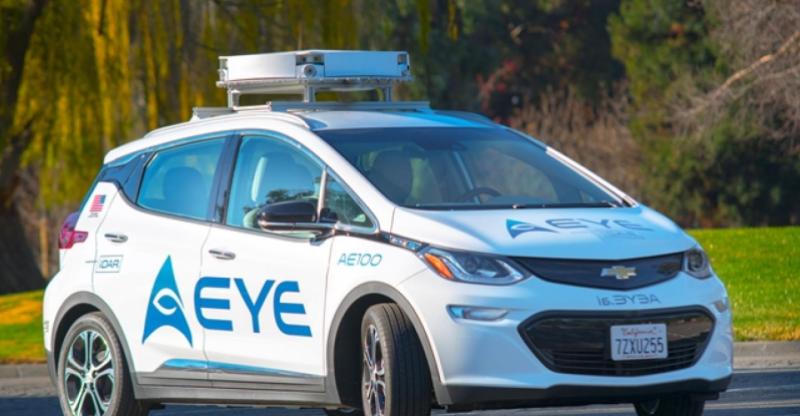 Above: AEye’s iDar system mounted on top of a car.

Alongside the funding announcement, AEye revealed that its proprietary solid-state iDar sensor was able to track a vehicle at 1,000 meters — roughly 4 times the range of most lidar systems — in a test conducted by analysts at VSI Labs. On an airport runway in Byron, California, it detected a 20-foot truck (in addition to pavement signs and markers) the length of the 914-meter runway, and in an off-runway test identified it from over 1,000 meters away.

“We … believe that with small adaptations, we can achieve range performance of 5km to 10km or more,” said Dr. James Doty, a neurosurgeon and clinical professor at Stanford University who serves on AEye’s advisory board. “These results have significant implications for the autonomous trucking and unmanned aircraft systems markets, where sensing distance needs to be as far as possible and potential threats identified as early as possible to achieve safe, reliable vehicle autonomy.”

It’s an impressive claim, but the iDar system’s core innovation is its ability to merge 300 meters of 360-degree depth information with RGB camera data to create a point cloud that AEye calls True Color Lidar. It’s the first on the market to combine lidar and camera data at the hardware level, AEye says.

The bulk of the research on iDar was spearheaded by Dr. Allan Steinhardt, whose career includes a stint at DARPA, where he researched space, terrestrial, and naval-based radar systems, and at Booz Allen Hamilton, where he served as a vice president and chief scientist. Steinhardt also headed radar research at MIT’s Lincoln Laboratory and Cornell University.

Steinhardt and the rest of the engineering team at AEye refer to the point cloud data as “dynamic vixels” — a portmanteau of pixels and voxels. (Voxels represent a value on a grid pattern in three-dimensional space, and they’re the elements that make up lidar sensor depth maps.) Dynamic vixels are the first ingredient in AEye’s secret sauce, the other being artificial intelligence (AI). Once the iDar generates the point cloud, AEye’s AI takes over, assessing the surroundings to track targets and flag objects of interest.

The data collected by the lidar and camera in the iDar — in addition to feedback loops at the sensor and perception layers and in path-planning software — enables AEye’s technology to perceive objects with minimal structure, like a bike, brake light, or signage, and distinguish between two objects of the same color. Additionally, it’s able to perceive contextual changes in the environment, like when a child turns their head before stepping into the street.

iDar also affords flexibility in environment mapping. Through a software API, car manufacturers can customize the thousands of embedded machine learning algorithms in the sensor to adjust the resolution of the point cloud on the fly, depending on which objects are within range of the sensor. They can decrease the resolution of the sky while bumping up the dynamic vixel count for a pedestrian or bicyclist, for example, or lock focus on a building as the car approaches.

Altogether, AEye claims that the iDar system has 16 times greater coverage and 10 times the frame rate — up to 100 Hz — of competing sensors, plus 8 to 10 times the power efficiency. It’s also modular. Though iDar uses a custom-designed solid-state lidar system, its other components are off-the-shelf and “built for cost,” LaCorte said, which helped AEye keep the price tag under $3,000. (For comparison, lidar manufacturer Velodyne’s VLP-16 lidar starts at $4,000 and maxes out at a range of 100 meters.)

AEye has competition, of course. Israeli startup Innoviz Technologies raised $65 million in September 2017 for its lidar tech, following on the heels of funding rounds by Oryx and TetraVue. Luminar, which claims to have developed lidars with a range of more than 250 meters and a 120-degree field of view, recently announced a strategic partnership with Volvo. That’s not to mention far-infrared pioneer AdaSky, ground-penetrating radar startup WaveSense, and velocity-measuring sensor company Aeva, all of which seek to develop technologies that complement traditional vision-based autonomous car perception systems.

But none of that’s phased investors like Huang Lee, a managing partner at Taiwania.

“We see AEye as the foremost innovator in this space, whose systems deliver highly precise, actionable information at speeds and distances never seen in commercially available lidar sensors,” Lee said. “We look forward to working closely with AEye’s team to explore and pursue growth opportunities in this burgeoning space.”