Have a nagging feeling that someone — or something — is watching you? Chances are it’s a camera. Cities around the world employ computer vision-enabled CCTV to monitor vehicle and pedestrian traffic. And in the near future, brick-and-mortar stores might use them to nab shoplifters.

Japanese telecom company NTT East teamed up with tech startup Earth Eyes to create AI Guardsman, a machine learning system that attempts to catch crooks in the act. Relying on open source technology developed by Carnegie Mellon University, it scans live video streams from cameras in convenience stores and supermarkets, tracking every customer inside. When it detects suspicious activity — for example, when a would-be thief starts looking for blind spots or begins nervously checking their surroundings — the system sends an alert to a store clerk’s smartphone with the person’s mugshot and location.

Distinguishing between thieves and indecisive shoppers isn’t easy, though, and NTT East makes no claims that its algorithm is perfect. It sometimes flags well-meaning customers who pick up and put back items and salesclerks restocking store shelves, a spokesperson for the company told The Verge.

But the telecom claims that AI Guardsman learns from its mistakes over time. In the companion smartphone app, clerks log whether or not they confronted suspects detected by the system, and the results are used to filter out false positives. 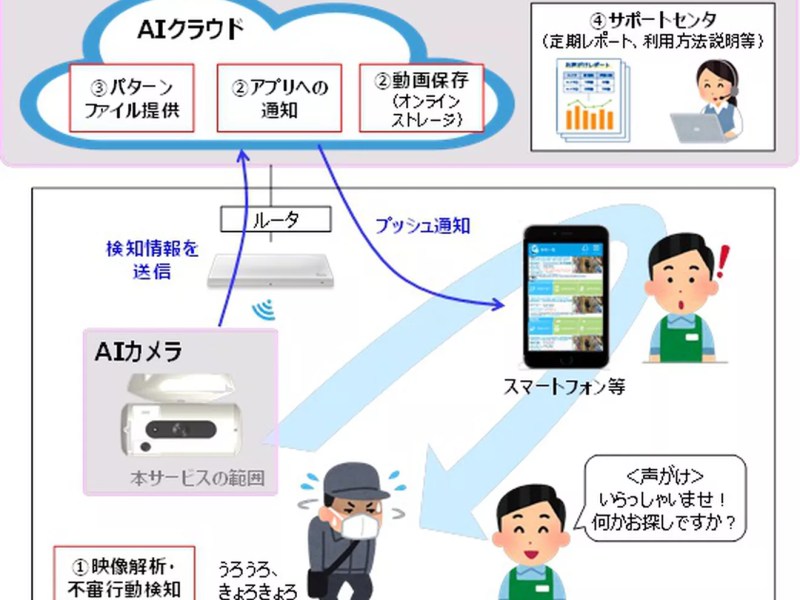 Above: A diagram illustrating how AI Guardsman works.

There’s a concern, of course, that AI Guardsman’s computer vision algorithms are susceptible to bias. A 2011 study found that facial recognition algorithms in China, Japan, and South Korea had more trouble distinguishing between Caucasian faces than faces of East Asians, and in a separate study, researchers observed that face detection systems from security vendors performed 5 to 10 percent worse on African Americans.

NTT East said the system couldn’t be discriminatory because it “does not find pre-registered individuals.”

Then there’s the issue of privacy. Groups in the U.S. protested Amazon’s sale of Rekognition, a facial recognition system, to local law enforcement in part because of its ability to track a person’s movements through a network of cameras.

But that’s not stopping NTT East, which has already deployed AI Guardsman a number of Japanese retailers including electronics store Bic Camera, pharmacy Kirindo, and sporting goods store Xebio. At one location, it led to a drop in shoplifting losses from 3.5 million yen per year to 2 million, according to Japan Today.

AI Guardsman, which costs around $2,150 in addition to a monthly subscription fee of $40, will go on sale at the end of July. Hopefully, we’ll learn more about its limitations and privacy protections before then.