Turns taken too quickly or sharply are responsible for nearly a fifth of all motorcycle accidents, according to estimates, which also suggest misjudged curves are to blame for 15% of rider fatalities. Fortunately, researchers at ETH Zurich and KU Leuven have recently proposed a solution in a paper on the preprint server Arxiv.org (“Learning a Curve Guardian for Motorcycles“). Their road curvature warning system leverages computer vision and mapping data to predict lane position and motorcycle roll angle, in addition to the road geometry of future paths.

“The most difficult maneuver on a motorcycle is riding through a curve, as it involves the rider adjusting their speed and the lane position of the vehicle before entering the turn and subsequently adjusting the handlebars to properly roll the motorcycle,” wrote the coauthors. “The slightest mistake can lead to an accident and it is thus no surprise that studies have shown that many motorcycle accidents (25-30 %) [2], occur when the rider is negotiating a curve.”

The team notes that road curve warning systems aren’t entirely novel, but that prior systems largely relied on assumptions about motorcycles’ lane positions, used costly sensors, and didn’t account for road incline. By contrast, the researchers’ approach taps a map database from Here Technologies and convolutional neural networks — AI architectures often used in visual analysis — to anticipate intra-lane position and estimate the current roll angle, and to obtain road geometry across the Americas, Asia, and Europe.

The team trained twin AI networks — LNet and RNet — by supplying images recording at different locations within a lane, some of which were augmented via rotations to simulate motorcycle roll (from -90 degrees to 90 degrees). The researchers collected the frames with a custom-built camera rig featuring seven GoPro Hero 5 Black cameras that simultaneously captured footage from different lane positions spaced at defined intervals within the lane, contributing to a corpus — aptly called the Learning Dataset — of around 2 million images split into training, validation, and test sets. 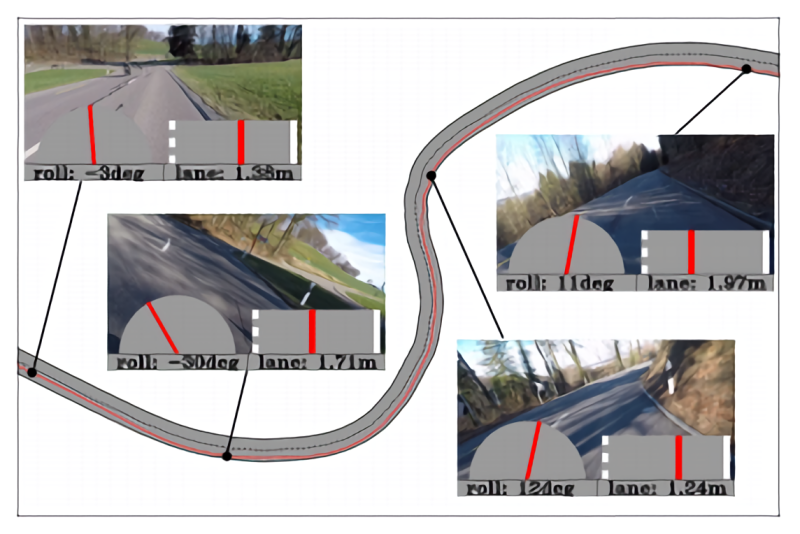 Above: The researchers’ AI system predicts roll and intra-lane position.

The researchers next simulated yaw and pitch changes of up to 10 degrees to improve the system’s overall performance and compiled a second data set (Motorcycle Dataset) containing four hours of real-world motorcycle riding recorded by a front-facing camera. They extracted images along with GPS coordinates and used a path-matching algorithm to predict the most likely path traveled by the motorcycle during recording. This enabled them to get map-matched GPS coordinates for each synchronized video, which they tapped to query a map database to obtain road curvature, incline, and speed limit data.

To validate their approach, the researchers conducted two tests: one involving images that the AI systems hadn’t encountered during training, and another during which the models were evaluated on real-world data captured with a GoPro camera. They report that the networks, trained on 1.5 million images from the Learning Dataset for 24 hours on a Nvidia Titan X GPU, performed “very well” in simulation and that in real-world tests the system could predict roll angles with a 3.7 degree mean absolute error compared with physical sensor measurements and lane position within 22.4 centimeters of the ground truth.