Amazon today announced that the 2018 Alexa Prize has been awarded to Gunrock — a team of about a dozen University of California, Davis students — for making the best conversational bot and advancing the state of modern AI. The announcement was made by Alexa chief scientist Rohit Prasad on the first day of festivities for the AWS re:Invent conference taking place this week in Las Vegas.

Whereas some automated bots are designed to work with little to no conversation, those designed for the Alexa Prize are meant to answer questions like “What’s your favorite color?” and achieve the very human art of light chit-chat. Such intelligence is behind Alexa, an AI assistant with a personality team and an ESFJ on the Myers-Briggs personality scale.

The competition could also, as previous Alexa Prize lead Ashwin Ram explained, lead to the development of bots capable of addressing the loneliness epidemic.

During July and August this summer, Echo speaker users who said “Alexa, let’s chat” were introduced to one of three finalist bots. Altogether, more than 1.7 million people participated in conversations with finalists social bots and assigned each exchange 1 to 5 stars. You can still speak to winning bots by saying “Alexa, let’s chat.”

This is the second year of the Alexa Prize, a competition that challenges teams of university students to create bots capable of maintaining casual conversations that can last up to 20 minutes. 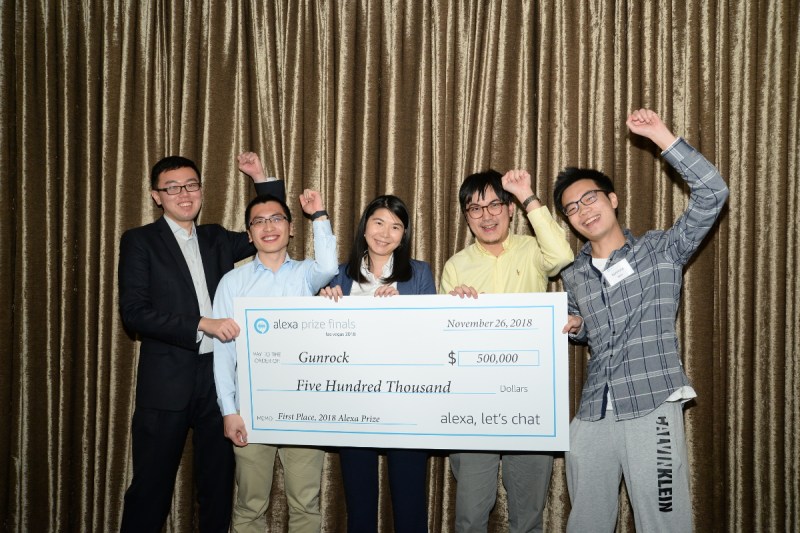 Above: Gunrock Alexa Prize team from University of California, Davis

Gunrock, named for the thoroughbred horse mascot for UC Davis, will receive $500,000 in prize money.

An additional $1 million grant was at stake for Gunrock if it could achieve an average user rating of 4.0 and maintain conversations for 20 minutes.

This is the second year Alquist has taken second place in the Alexa Prize.