Cashierless shopping feels a little bit like magic. There’s something indescribably awesome about being able to grab something from a shelf, stuff it in a coat pocket, and waltz away without having to contend with long lines or busted self-checkout machines. That “coolness” factor — along with the significant cost savings cashierless experiences promise — have given rise to a cottage industry of solutions led by standard-bearer Amazon and its Amazon Go chain.

The space’s startups have been mostly retailer-agnostic so far, and it’s no wonder why — brick-and-mortar space is expensive. San Francisco-based Standard Cognition this summer announced a partnership with Paltac in Japan that will see its autonomous checkout solution deployed in 3,000 stores, along with unnamed retailers in North America and Europe — and it’s impressed investors with its progress. The company today said that it has raised $40 million in series A funding led by Initialized Capital, with continued participation from CRV and Y Combinator.

Cofounder and CEO Jordan Fisher — one of seven founders, five of whom came from the U.S. Securities and Exchange Commission — said that the capital will fuel its ongoing global expansion and allow it to expand its team.

“In 2019, consumers will start to see autonomous checkout deployed in their favorite stores, and by 2025, it will be common,” said Fisher. “We can’t wait to execute on this next stage of Standard’s growth.”

Standard Cognition’s patented platform uses a combination of cameras and machine learning algorithms to keep track of shoppers as they rove around store floors. Much like Amazon Go, items taken from a display or shelf are added to a running tab and automatically charged to shoppers’ accounts as they exit. The system is smart enough to account for mistakes, like when a customer puts back an item they’d initially considered purchasing. And it anonymizes data, obviating the risk of overzealous brands or retailers targeting purchasing patterns. 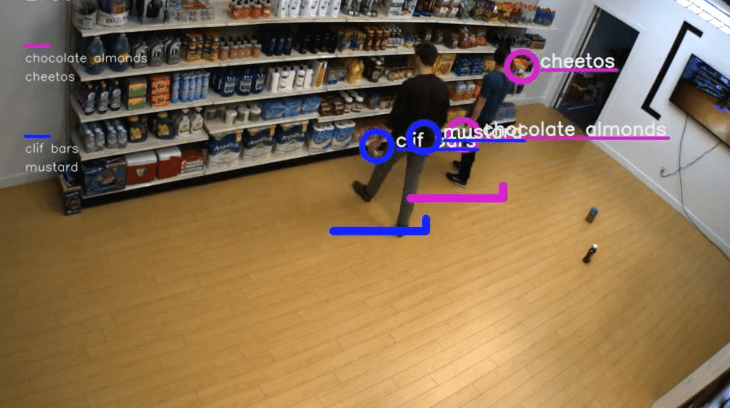 In September, Standard Cognition became the second company to open a cashierless store in San Francisco, following hot on the heels of Zippin in August. The 1,900-square-foot space at 1071 Market Street lacks a check-in gate — all you need to begin shopping is to check in using the Standard Checkout app — and sports 27 ceiling-mounted cameras, each wired to a networked appliance that performs inference. It’s stocked with snacks, personal care items, and cleaning supplies currently, with plans to expand its food selection in the coming weeks.

It serves as a sort of functioning showroom, Fisher explained. Standard Cognition is using the anonymized data from the store to improve its algorithms, and to walk prospective retail partners through live demonstrations.

“We’re seeing in our San Francisco store that shoppers love the convenience, and retailers love the accuracy, cost savings, and customer service advantages,” he said.

Trigo Vision, meanwhile — which this week inked a deal with Israel supermarket chain Shufersal for 272 cashierless stores — offers retail partners an AI-driven system that, like Standard Cognition’s, taps a network of cameras to track customers through aisles, automatically tabulate their bills, and surface relevant coupons.

Amazon is the elephant in the room, of course — its Amazon Go locations in Seattle, Chicago, and San Francisco employ sensors, AI, and smartphones to streamline retail flows.

Even Microsoft is said to be working on cashierless store technology.

“The Standard team has been an execution machine, meeting or exceeding every goal and working tirelessly to get in front of nearly every major retailer on the globe,” he said. “They have huge technology advantages that are readily apparent to retail clients, and are years ahead of other startups in this space — we think Standard is the most exciting play right now in AI or retail tech.”