Amazon launched an all-new Fire 7 tablet today, replete with a handful of upgrades on its predecessor. Arguably, the most notable of the new features is an improved hands-free experience for its Alexa digital assistant.

For context, Alexa has been available on Fire HD tablets for several years, but it wasn’t until the Fire HD 10 in 2017 that it was possible to rouse Alexa without having to touch the device first. In April last year, Amazon announced it was bringing Alexa hands-free mode to its smaller Fire 7 and Fire HD 8 tablets via a software update, but with caveats. To use Alexa, the screen would have to be “on” (i.e. not on standby), or connected to a power outlet. With the updated Fire 7 tablet, Alexa will be available at all times — even when it’s on standby.

This aligns the smaller incarnation of Amazon’s tablet with the Fire HD 8, which was given a similar hardware upgrade last September. But the Fire 7 is $50, which is $30 cheaper than the Fire HD 8 — the more affordable point-of-entry should make the Fire 7 appeal to more people. 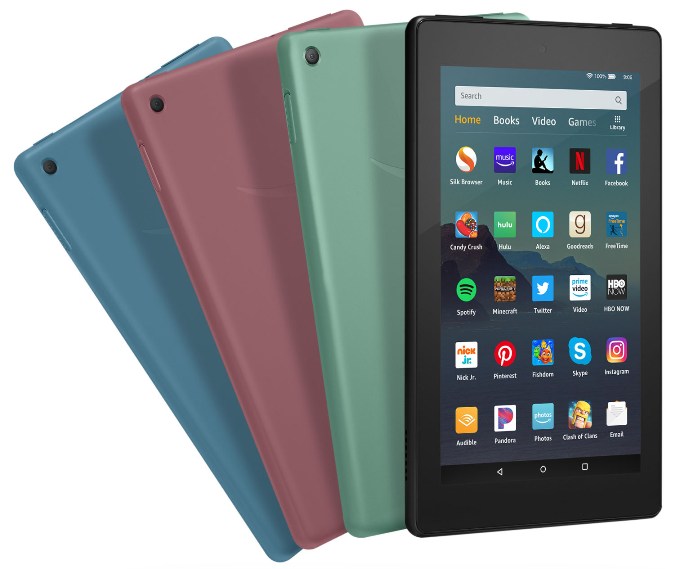 It’s worth noting here that this update effectively positions the Fire 7 tablet as a portable alternative to one of Amazon’s Echo smart speakers; however, it lacks one core feature of the Fire HD 8. Last June, Amazon announced a new show mode for the Fire HD 8 and Fire HD 10, ushering in a full-screen display that allows Alexa to give visual responses in addition to the usual audio answers. This transformed these tablets into something like an Echo Show, Amazon’s first screened Echo device, which launched in 2017, and the Echo Spot, which launched the same year. However, the updated Fire 7 tablet doesn’t yet have show mode.

Elsewhere, the new Fire 7 device still sports a 1.3GHz quad-core processor, though the company said that it has a faster core compared to its predecessor. Moreover, it now comes with a new 32GB incarnation ($69.99) in addition to the existing 16GB option, and supports up to 512 GB of storage via a MicroSD card. Three new colors are also available: sage, plum, and twilight blue.

In related news, Amazon also today lifted the lid on a new Fire 7 Kids edition, which costs $100 and also ships with a faster processor than its predecessor.

Both the new Fire 7 tablet and Fire 7 Kids edition are available to buy on preorder from today, though they won’t ship until June 6.