At a breakout session during Amazon’s re:MARS conference in Las Vegas, Samyukta Sethuraman, a senior research scientist at the Seattle company’s cross-disciplinary AI team, gave an update on Amazon Locker, Amazon’s self-service parcel delivery service. She said that Locker usage is growing at a steady clip and that machine learning has improved reliability.

For the uninitiated, Locker allows shoppers to select physical lockers located in shopping centers, business parks, gas stations, and convenience stores as their delivery address and to retrieve their orders at the location by entering a unique pickup code on the locker’s touch screen. Customers can choose among several delivery options (e.g., same-day, next-day, and 3-5 days), and packages stay in lockers for a maximum of six days.

Lockers were available in over 900 cities and towns in the U.S. and in over 2,600 locations in the U.K. In the U.S., they’re in retail stores such as 7-Eleven, and select Whole Foods stores, and in the U.K. Amazon has a partnership with Co-operative Food and Morrisons.

When an Amazon Locker reservation comes in, a real-time decision-making system determines whether the package will fit in the selected locker by predicting occupancy on the estimated delivery date, taking into account current occupancy. If the current occupancy is equal to or less than the anticipated two-day capacity reservation, the delivery is allowed to go through; if not, it’s rejected. 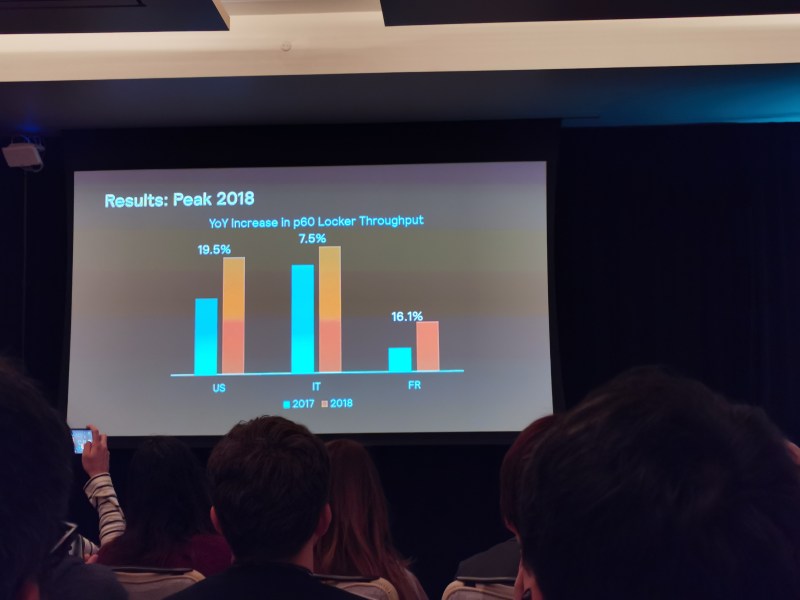 However, thanks to a combination of AI-driven enhancements and mathematical optimizations that rolled out last year, the volume of successfully fulfilled Locker deliveries during the service’s 2018 peak increased by 19.5% year-over-year in the U.S., 7.5% in Italy, and 16.1% in France.

Amazon delivers packages to customers in an increasing number of places. In April, months after it began making deliveries to the trunks of GM and Cadillac vehicles in 37 cities via Key In-Car, the company teamed up with Ford to bring the service to the automaker’s cars.

Earlier in the year, Amazon expanded Key for Garage — a keyless delivery option that allows couriers to drop off packages in carports when residents aren’t around — to a host of new U.S. cities, including Charlotte, North Carolina; Columbus, Ohio; Fresno, California; Las Vegas, Nevada; Oklahoma City, Oklahoma; and Virginia Beach, Virginia. In January, it announced that Key by Amazon — which allows those same couriers to leave packages inside of homes — would work with new third-party smart locks from Schlage and others.

On the commercial side of the equation, there’s Key for Business, a fob for delivery drivers that enables keyless entry to offices and corporate properties. Building managers and landlords can give controlled access to drivers and monitor entries or impose limits on delivery hours, and Amazon says Key for Business works with most building access systems.

Currently, Key for Business is available to “hundreds” of buildings across the U.S., including apartments owned by WinnCompanies, Avalon, and Kettler. It builds on Hub, a delivery solution Amazon launched in June 2018 with properties owned by Fairfield Residential, Pinnacle, J.P. Morgan Asset Management, Equity Residential, and others.

At the time, Amazon said that more than 500,000 customers in New York, San Francisco, and across the country had access to Hub, which recruits on-site property staff to sign for shipments from Amazon and other shops and websites.