That’s great and all, and I applaud Amazon for dipping its toes into high-end audio without alienating first-gen Echo adopters. But here’s the thing: The voice-enabled Hi-Fi ship sailed a long time ago. Apple’s HomePod, which launched in February, already has 70 percent of the burgeoning $200-and-up smart speaker segment.

If the HomePod were the only high-end smart speaker Amazon had to contend with, it might have a fighting chance — after all, Apple’s product starts at $350, and its voice assistant of choice — Siri — doesn’t offer nearly as many integrations or third-party apps as Amazon’s Alexa. But I predict that the real competition will come from none other than Amazon’s ecosystem partners, which run circles around the Echo in terms of features.

Take Bose, for example. In August, the company announced its first voice-enabled speaker — the Home Speaker 500 — powered by Amazon’s Alexa Voice Service, a suite of APIs and tools that let any developer integrate Alexa voice capabilities into their own products (Google Assistant support is reportedly on the way). The $400 speaker has a built-in color screen, two drivers that output tracks in two-channel stereo, and the “widest soundstage” of any smart speaker on the market (according to Bose, at least).

And look at Sonos. Its $400 Alexa-powered Beam soundbar (with Siri and Google Assistant voice controls on the way) has a five-microphone array, touch-sensitive controls, and an HDMI port for easy pairing with televisions. Heck, it’s even got AirPlay 2 onboard, which lets folks with iOS devices beam music to it over Wi-Fi. 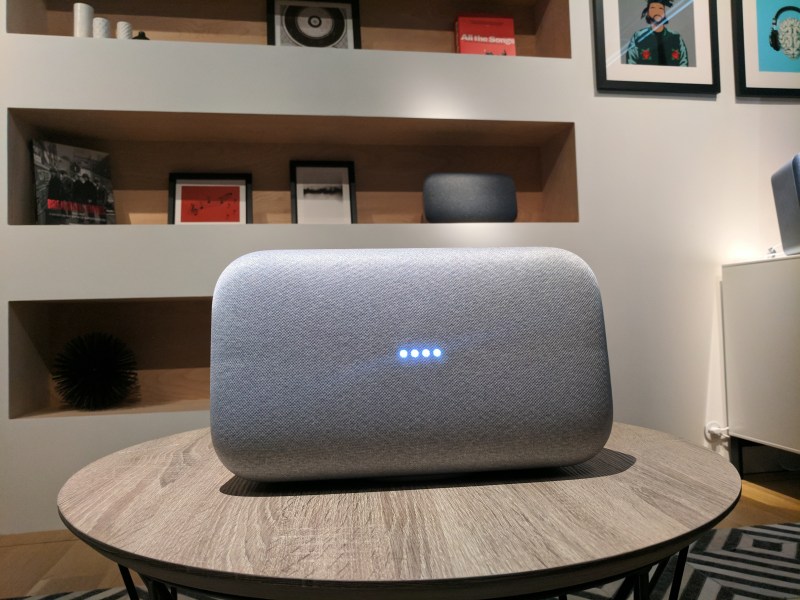 The $400 Google Home Max isn’t half bad, either — despite the fact that it’s strictly a Google Assistant affair. Its 3.5mm headphone jack sets it apart from its competitors, as does its powerful quad drivers and six amplifiers.

To me, the three are a lot more compelling than Amazon’s peripheral subwoofer. They’re admittedly on the pricier side, though. So what about the more affordable options?

The $200 Alexa-powered Sonos One doesn’t have two drivers (you’re stuck with stereo unless you pick up a second speaker), but its six-microphone array and echo-canceling tech more than compensate for the omission. It too supports AirPlay 2, with Google Assistant coming soon.

Another great choice: the $400 UE Megablast, which, in addition to boasting a waterproof (IP67) body and Alexa support, draws power from a battery that lasts up to 16 hours on a charge.

If none of those floats your boat, there’s the $200 Sony Google Assistant-powered LF-S50G, which has a 360-degree speaker system and dedicated subwoofer (and a built-in clock to boot); the portable (and also waterproof) $200 JBL Link 20; and the Panasonic GA10.

They’re not much more expensive than a $130 Echo Sub and Amazon’s least expensive standard Echo SKU, the $50 Dot, which comes out to just $20 cheaper — and that’s for a 1.1 setup.

There’s an argument to be made that the Echo Sub isn’t aimed at new Echo buyers, but rather those who’ve got an Echo on hand. But I’d argue that Echo Dot owners are better off picking up an inexpensive 3.1 audio system. (The Echo Dot has a 3.5mm audio out jack.) Sure, the tunes won’t be in stereo, but the cost savings will be substantial — Logitech’s Z313 runs about $50, which compares favorably to $230 for two Echo Dots and an Echo Sub.

Clearly, Amazon’s “Alexa everywhere” strategy is paying dividends — even if its first-party share of the voice-enabled speaker market is slowly declining. The retailer’s voice assistant is integrated with over 20,000 devices (up from 4,000 eight months ago).

But Amazon, which arguably kicked off the smart speaker craze four years ago when it launched the Echo, missed its window of opportunity in premium audio. Unless you’re stuck with an old Echo or Echo Plus, or compelled for some reason to add a subwoofer to the Echo Show or Spot, there’s no compelling reason to pick up an Echo Sub.