During a Wednesday keynote address at Amazon’s re:MARS conference in Las Vegas, the company announced a slew of features for its existing products and previewed new services to come. One of those it touched on was Prime Air: Amazon said that in the coming months, a newly designed, fully electric, and completely autonomous Prime Air drone will begin delivering packages to customers as part of pilot tests.

“Over time, we’ll work with regulators and governments and try to reach as many customers as possible,” said Amazon’s consumer worldwide CEO Jeff Wilke onstage. He added that Amazon has “permission” from federal agencies to perform tests with drone fleets in the U.S., and that the goal is a commercial service. “We’re focused right now on the areas where we can land in a backyard.”

Specifically, Amazon aims to fulfill orders within 30 minutes for shoppers within 7.5 miles of some of its hundreds of warehouses around the world. Packages will be carried in a square-shaped pod in the center; the drone is designed to come within a foot or two of the ground and drop the package in a marked spot.

Amazon’s drone — the latest of over a 50,000 iterations, or tens of thousands of hardware-in-the-loop simulations and tens of thousands of real-world data sets — is capable of vertical takeoffs and landings, and it’s able to carry parcels weighing as much as five pounds, which covers 75% to 90% of packages Amazon ships to customers today. That’s thanks to a novel shape and shroud, and six degrees of freedom instead of a standard four, plus six propellers that have been optimized to dampen high-frequency sounds.

It wasn’t just the volume of these sounds that the team tried to minimize. They took into account the character of the sound — specifically its sharpness, roughness, fluctuation strength, and tonal prominence.

There’s even more to the design than meets the eye — and ear, for that matter. The drone’s propellers have an S-curve designed to make them more stable in high winds, and they can be easily stopped to limit the potential for injury. Moreover, according to Amazon, all of the components are already certified for use on other aircraft or were designed and built from scratch to meet FAA regulations.

Safety is of the utmost priority, according to Amazon. Toward that end, it continuously evaluates two key metrics: whether the airspace is safe and whether the ground is safe to approach. Deliveries are planned to be clear, and the drone’s onboard sensors (more on those later) verify everything.

The drone’s machine learning algorithms take as input sensory data, and decide what to do when the descent and climb paths aren’t clear, the delivery location isn’t detected, people and animals are in the delivery area, and the objects in the delivery are too large or too close to the ground. It might abort the delivery and fly to a nearby warehouse and wait, for instance, or land and stop its motors. 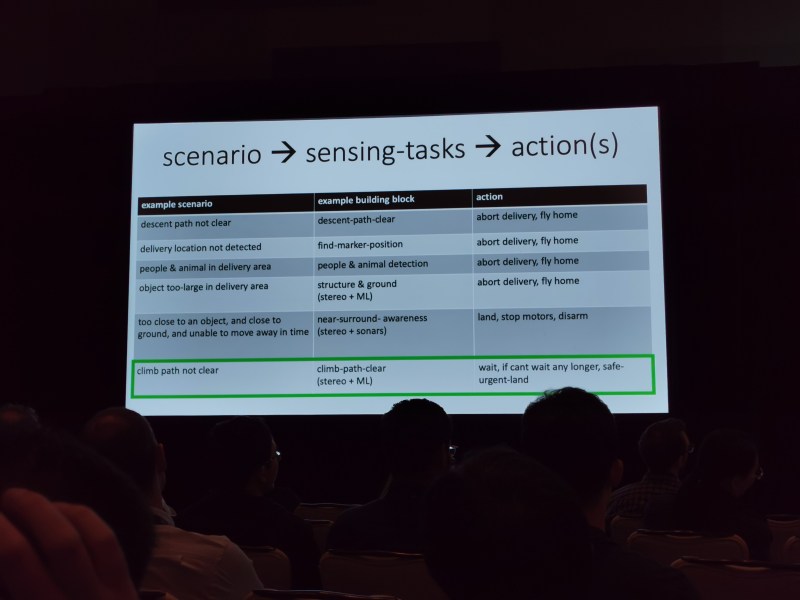 “We know customers will only feel comfortable receiving drone deliveries if the system is incredibly safe,” said Wilke.

Furthermore, the as-yet-unnamed drone is outfitted with sensors (including stereo RGB cameras and thermal cameras) that feed data to sophisticated machine learning algorithms, enabling it to automatically detect when a customer gets too close and avoid hazards like pets, paragliders, and power lines. It has four control surfaces that allow it to maneuver in flight, and it’s capable of flying up to a maximum 15 miles. (Amazon says it’s using “smarter algorithms” to extend the drone’s battery life.)

In the years since Amazon launched a trial of its Prime Air drone delivery service for select customers in Cambridge, England, in December 2016 and demoed an earlier version of the Prime Air drone at MARS back in 2017, its distribution network has grown considerably. It now includes more than 50 cargo planes and 19,000 trailers, which helped to deliver over 1 billion items to Prime members last year.

Companies like Microsoft and startup Flytrex have trialed airborne delivery services in cities like Holly Springs, North Carolina and Wichita, Kansas. In May, Uber announced plans to deliver food by drone in San Diego, and FedEx plans to develop a drone-powered aircraft inspection program in Tennessee. More recently, Matternet teamed up with UPS to launch an aerial delivery service from WakeMed’s flagship hospital and campus in Raleigh, North Carolina.