No one was ready for the original version of AirPods. Apple announced the stubby wireless earphones in September 2016, then missed their promised October release date, and only began to trickle the first shipments out in December. Early users were at best mixed on their fashionability and practicality, while availability remained poor for months.

Then something weird happened. Instead of the typical thunderclap moment when a new Apple product debuts and people line up to try or buy it, AirPods slowly became acceptable, and in some circles, even cool. Apple clinically blamed a supply-demand mismatch for continued availability problems, which skeptics attributed to poor supply and fans attributed to surprisingly high demand. Regardless of the reasons, interest built up for a sequel.

So two and a half years after the first model’s introduction, we’re saying hello (or “Hey, Siri!”) to Apple’s second-generation AirPods, which just arrived in stores. Physically, they’re virtually indistinguishable from the original design — contrary to some pre-release rumors, they haven’t changed in color, texture, or shape, nor are they waterproof or laden with a mysterious new health sensor. 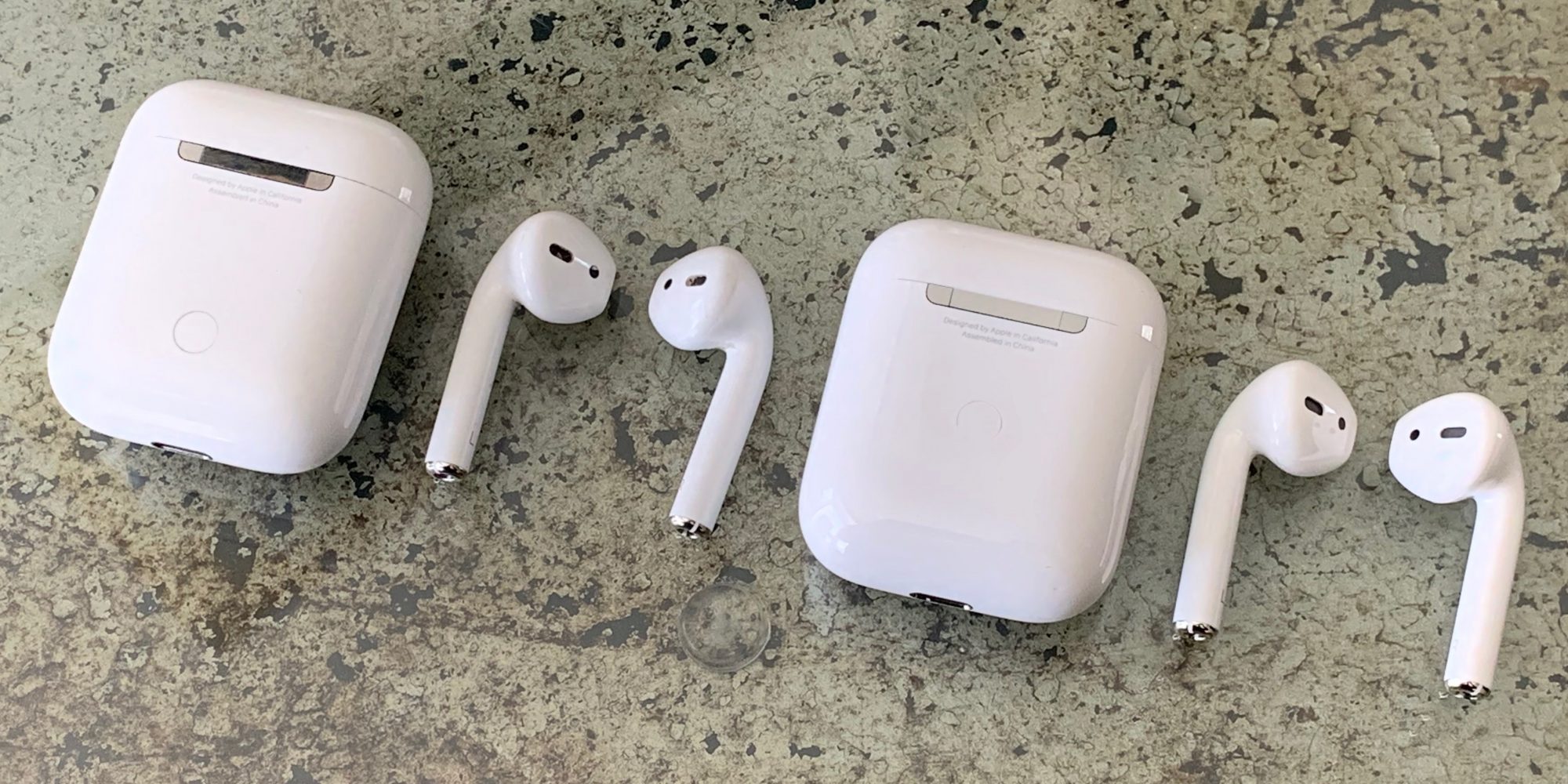 The new model’s improvements are almost entirely invisible. A new H1 headphone chip replaces the first model’s W1 wireless chip, promising instant AI support when you say “Hey Siri,” faster Bluetooth pairing, lower latency, and an hour of extra talk time. That’s it for the standard model, which preserves the prior version’s $159 price. If you instead pony up $199, the new AirPods come with a wireless charging case that Apple revealed in September 2017, then held back for over a year amid reported problems with AirPower, its companion wireless charging pad.

Since VentureBeat is increasingly focused on AI, I’m going to dive into the new Hey Siri feature before moving briefly into the other topics. Buckle up, because it’s about to get a little bumpy.

Does anyone care about Hey Siri?

Apple’s digital assistant Siri is a mess, and as last year’s HomePod release demonstrated, it’s best not to get your hopes up for it to work perfectly — even when it’s a new Apple product’s signature feature. It’s supposed to use a combination of local and cloud processing to help you quickly access information, play music, and use various features of your device, but in real world use, its performance is hit-or-miss.

As I was writing this article, I asked Siri on an iPhone to “tell me what you can do,” and received responses such as “I’m not sure I understand” and “that may be beyond my abilities at the moment.” But slightly changing the question to “what can you do?” caused the long-established list of “some things you can ask me” to flash on an iPhone screen for 5 seconds before disappearing … complete with zero audio response through new or old AirPods.

Roughly 5 years ago, “Hey Siri” debuted to make Siri easier to activate. Apple devices with Hey Siri support constantly listen for those two words, and instantly trigger Siri whenever they’re spoken. This eliminates the need to activate Siri with a button, and in some cases, that’s a handy feature. Hey Siri started in iPhones before coming to certain iPads, Apple Watches, and Macs; it’s not available on Apple TVs or iPods. 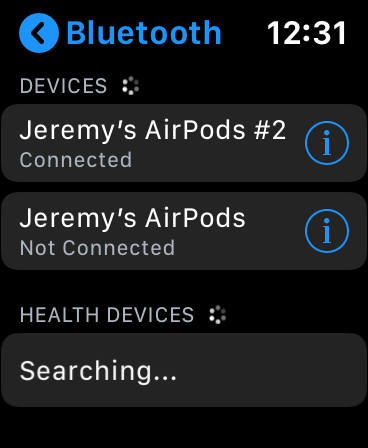 Bringing Hey Siri to a $159 pair of AirPods could have been great for all Apple users. Since AirPods are specifically designed to extend the speaker and microphone ranges of other devices, they’re built for use cases where adding voice control without physical access to the devices makes sense. You might want to keep both your phone and your hands in your pockets on a cold day. There might be a time when you’re trying to listen to music streamed from your Apple Watch, iPad, or Mac completely hands-free. Or you might want to control an Apple TV quietly from bed without fidgeting with a remote.

I said “could have been” because the AirPods version of Hey Siri doesn’t actually let you do all these things — at least, not right now. The feature works as expected on iOS devices, letting you instantly conjure up Siri for whatever you may want to try, and I was surprised at how fast Siri responded: The new AirPods are definitely listening. When they were paired with my Apple Watch, I was able to get Siri to launch watchOS apps, but other Siri inquiries were passed through the connected iPhone, displaying content on the phone’s screen while speaking key parts through the headphones, a mixed result. 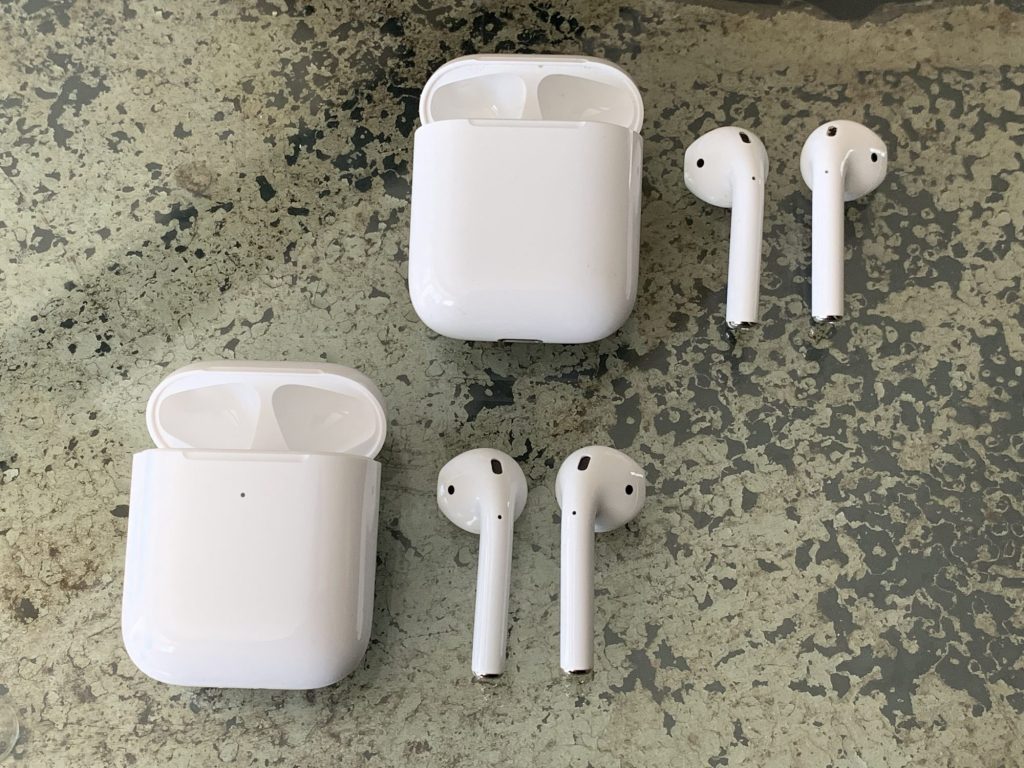 Oddly, I had trouble getting the second-generation AirPods to work properly with either the Apple TV HD (formerly known as the fourth-generation Apple TV) or the Apple TV 4K, both running the latest version of tvOS, 12.2. Both devices claimed to initially pair with the headphones but almost immediately lost their connections.

I was also interested in seeing how my 2016 Retina MacBook Pro with Touch Bar (and Siri button, but not integrated Hey Siri) worked with the new AirPods. At least for now, Hey Siri didn’t work with my Mac. I was able to stream music and other audio to the new AirPods, but saying Hey Siri was met with complete silence. A friend confirms, however, that the feature works properly on his 2018 MacBook Air with its own Hey Siri hardware.

My suspicion is that some of the issues I encountered will be improved with subsequent software releases for the Apple TV, Mac, and Apple Watch, if not a firmware update to the AirPods. But as updates to the original AirPods firmware were intermittent at best, I’m not holding my breath right now.

A bigger change to AirPods is one you’ll need to pay extra to experience: wireless charging. Apple added a Qi-compatible charging coil to the deluxe version of its AirPods charging case, and made two small changes to the outside of that case. First, the tiny dot power and pairing indicator light is now outside rather than inside, so you can see when it’s making contact with a charger. Second, the rear pairing button has been moved to the rear side’s center rather than the rear bottom. 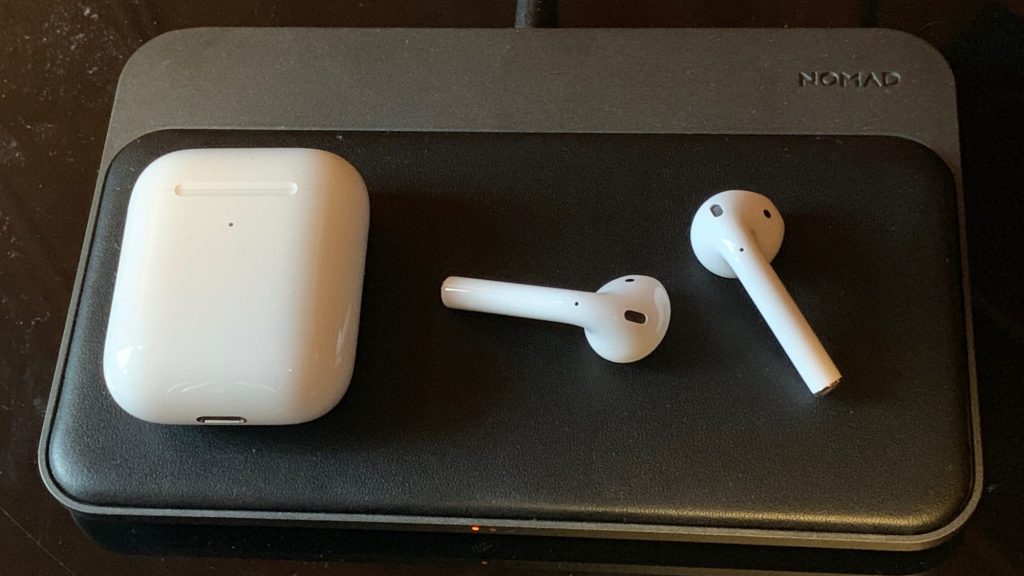 There’s one and only one reason to care about this feature: convenience. Apple ships even the wireless charging case model of AirPods with a Lightning cable and preserves the bottom Lightning port so you needn’t rely on the wireless feature. This is your only option if you’re still waiting on Apple’s official charging pad AirPower, which as of press time still doesn’t have a release date.

I personally tested the wireless charging on a competing product from Nomad called the Base Station Hub Edition. The $100 accessory has a padded leather charging surface that can be used to charge up to three small devices at once, or one iPhone and one pair of AirPods in the wireless charging case, assuming you line up the devices properly on the three hidden Qi charging coils. While Nomad’s device doesn’t have all the fancy features Apple promised for AirPower (on-screen charging indicators! place devices anywhere! enough room for three devices!), it has the benefits of looking good and actually existing at an unobjectionable price point. 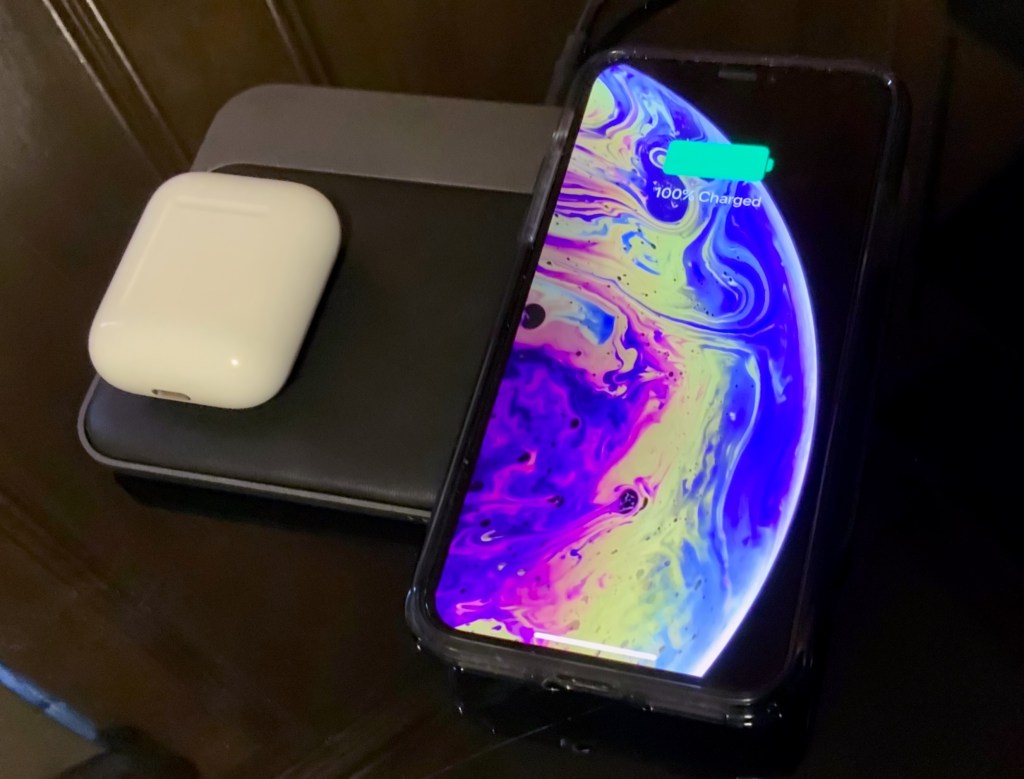 That assumes, of course, you’re willing to drop the extra cash to wirelessly charge your wireless headphones. Otherwise, you can stick with the $159 model and plug the case in when you need more power.

Latency, sound, and everything else

Putting aside the wireless issues I experienced with certain devices, the second-generation AirPods are essentially a modestly improved version of the original. Users will find that they remain remarkably easy to pair with iOS devices and fairly easy to pair with other Apple products; the new H1 chip promises faster device switching and lower latency — the latter reducing synchronization issues when playing games or watching videos. I found the difference to be just barely noticeable with videos, but in a game like Pac-Man Championship Edition DX, the sync between eating pellets and power-ups was better.

Overall, the new AirPods’ sonic signature has improved a little. In brief A/B testing, I noticed what sounded like clearer and slightly more pronounced bass in the new model, with what appears to be an enhancement in overall sonic range — highs, mids, and lows alike sounded a little more defined. I keep using words like “little” and “slightly” to emphasize that the differences aren’t huge, and Apple could have made a bigger change by switching to a noise-isolating design, but the new AirPods do sound incrementally better to me. 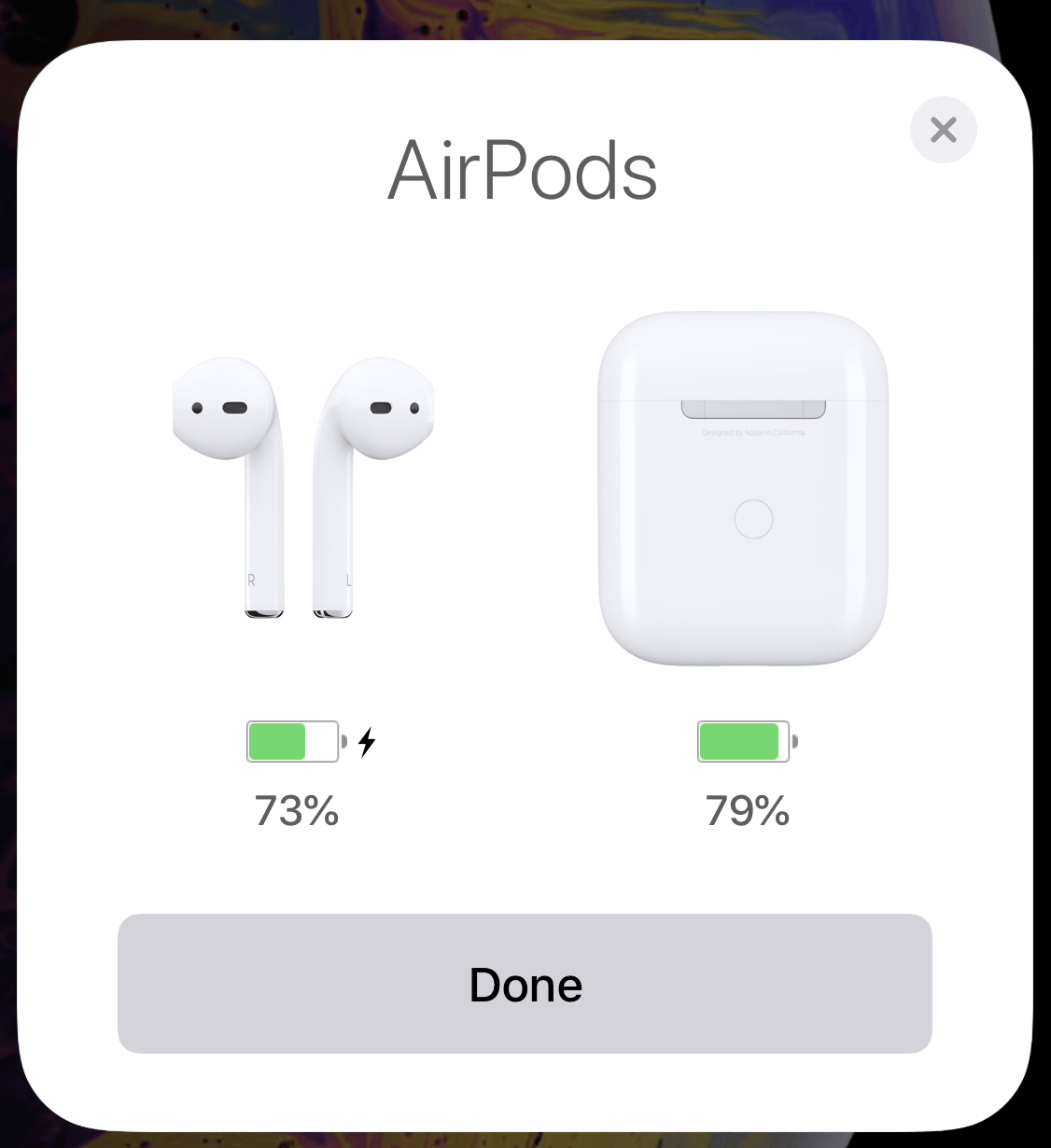 The new model also promises an hour of extra Bluetooth talk time, which is to say 3 hours rather than 2, while keeping the same 5 hours of normal music play time without case assistance. A fully recharged case can keep the AirPods going for 24 hours, unchanged from before. Collectively, Apple’s three batteries are enough to satisfy everyone except those who keep their wireless headsets permanently grafted to their ears throughout the day.

Some early AirPods adopters have noticed that their first-generation models’ batteries are dramatically less performant than they were when originally purchased — no surprise given that batteries typically only preserve 80 percent of their initial capacity after hundreds of charge-discharge cycles. Since the batteries aren’t replaceable, this should be a known issue for any AirPods buyer: Expect to hand down or toss out your AirPods every two or three years.

I’d need more time with AirPods than I’ve had thus far to issue a complete review, but for the time being, my impressions are generally positive. The last AirPods weren’t cheap, but they delivered a solid listening experience with fantastic convenience. This year’s model is an improvement, though you should probably keep your expectations low, particularly if you’re hoping for anything special from the “Hey Siri” feature. Having purchased the first model, I’d personally be inclined to hold out for a bigger (and preferably waterproof) upgrade, assuming my batteries keep running and recharging properly.