Apple is introduced a smaller version of its HomePod smart speaker today, just the second smart speaker from Apple since the original HomePod debuted in 2017. The HomePod mini will sell for $99 and goes on sale November 16. It comes in space grey and white. The round speaker with a flat bottom closely resembles the fourth-generation Echo Dot introduced by Amazon at an annual product event last month, but unlike the Echo Dot, the HomePod mini has a glowing top that illuminates with color when speaking with Siri. The HomePod mini includes the U1 chip first used in the iPhone last year for syncing with nearby smart speakers or Apple devices. With the chip, when an iPhone user approaches a HomePod mini they can get visual, audible, or haptic feedback. iPhone users will also be able to hand off music by moving their phone close to the speaker.

A smaller speaker will allow Apple and AI assistant Siri to compete with low-price speakers like the Amazon Echo Dot and Google Nest Mini as well as speakers from Alibaba, Baidu, and Xiaomi in China. Small, low-cost options are frequently among the popular smart speakers in the world. Many smart speaker owners buy more than one speaker, so a smaller option gives consumers a less expensive way to spread speakers throughout their home for music, podcasts, smart home voice control, and AI assistant voice commands. It also allows people to utilize Intercom, a new Siri feature for communicating with your family to exchange messages via AirPods, smartphones, and smart speakers. 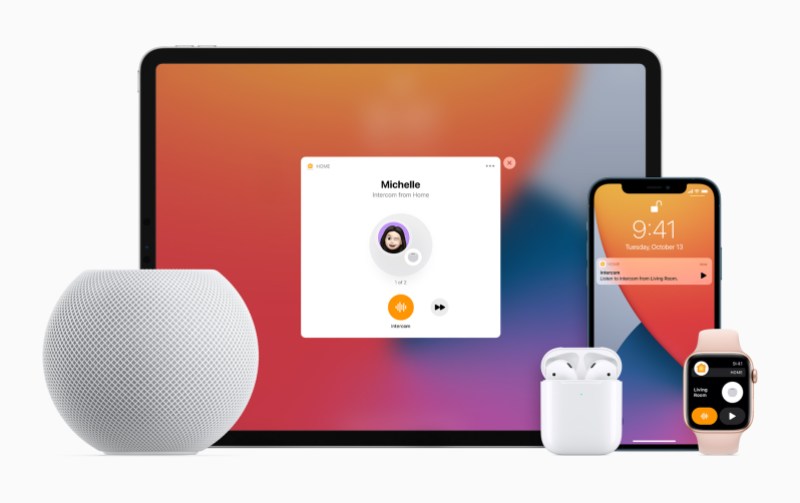 The news was announced today as part of a digital event where the iPhone 12 5G with the A14 Bionic 5 nanometer chip was also introduced. The HomePod mini will go on sale in Australia, Canada, France, Germany, India, Japan, Spain, the U.K., and the U.S., and will go on sale later this year in China, Mexico, and Taiwan.

Whereas Apple will soon have two smart speakers on the market, competitors Amazon and Google have developed brand lines with far more choices, and third-party manufacturers incorporate Alexa and Google Assistant into their products. Siri is still only available through the HomePod and native Apple products.

Apple introduced the original HomePod in 2017 for $349, a price point perhaps fitting with Apple’s reputation as a premium brand, but far outside the cost of Google Home or Amazon Echo speakers. Apple subsequently dropped the price in 2019 to $299. A 2017 consumer survey found that price is the most important factor for smart speaker shoppers.

An antitrust report released by a Democrat-led group in Congress last week declared Apple, Amazon, Facebook, and Google monopolies and saw smart speakers as a way to “lock consumers into information ecosystems” for Alexa, Google Assistant, and Siri. The congressional report asserts that Amazon pushed its smart speaker at lower prices to increase its market share. That information ecosystem lock-in effect is why an analyst said Google should give everyone in the United States a free smart speaker.

Echo speakers account for 60% of the smart speaker market in the U.S. today, but people are still most likely to interact with a voice assistant through a smartphone. A December 2019 analysis cited in the congressional report found that Siri currently holds 35% of the world’s current AI assistant market globally due primarily to iPhone and AirPod Pro sales, followed by 9% for Alexa and 4% for Google Assistant.