“Apple Watch has helped so many people around the world, and we are humbled that it has become such an important part of our customers’ lives,” Jeff Williams, Apple’s chief operating officer, said in a statement. “With the release of these heart features, Apple Watch takes the next step in empowering people with more information about their health.”

An ECG shows the way your heart is beating, displayed in a shape that a clinician or computer can recognize as normal or abnormal. If the shape is consistently close to baseline, you’re in good shape. But if not, it’s time to visit a doctor.

The ECG feature ships in WatchOS 5.1.2 for Watch Series 4 owners in the U.S., and will be available for download today. Additionally, the Apple Watch Series 1, Series 2, and Series 3 now support irregular heartbeat notifications, a feature that occasionally checks wearers’ heart rhythms in the background and shows an alert if an irregular rhythm is detected on five checks over a minimum of 65 minutes.

For the uninitiated, Apple Watch Series 4 has three new heart-monitoring features. One sends a notification if your heart rate is determined to be too low. The second screens for heart rhythm irregularities that appear to be atrial fibrillation (AFib), which is caused by poor blood flow and can increase the risk of cardiovascular conditions such as stroke and heart attack. (With watchOS 5, it intermittently analyzes heart rhythms in the background.) And the third allows you to record electrocardiograms (ECGs) with the Watch’s crown and sapphire glass back.

It’s a quick and painless process. You load up the ECG app, touch your finger to the crown, and wait for the results to appear onscreen.

Recordings take less than 30 seconds and are saved in PDF format for easy exporting, and they can be checked within a connected iPhone’s Health app. (ECG syncing requires iOS 12.1.1.) Apple claims the Apple Watch Series 4 is the first ECG product offered over the counter to consumers and the first of its kind to receive clearance (De Novo classification) from the U.S. Food and Drug Administration. 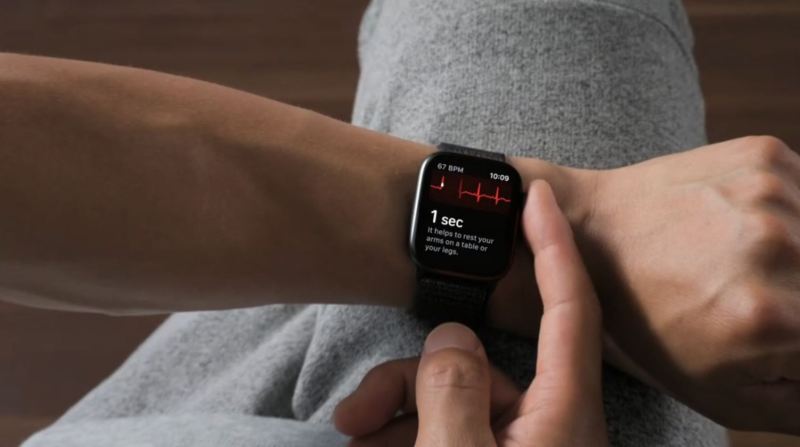 It’s not without caveats, of course. ECGs aren’t meant to be taken by people younger than 22 or those who have known heart conditions, the FDA noted in a summary document, and it warns that the Apple Watch Series 4 “is not intended to provide a notification on every episode of irregular rhythm suggestive of AFib, and the absence of a notification is not intended to indicate no disease process is present.”

Apple, for its part, warns that the feature is “not intended to be a diagnostic device or to replace traditional methods of diagnosis” and “should not be used to monitor or track disease state or change medication without first talking to a doctor.”

But the Cupertino company says that in a clinical trial of around 600 people, the ECG app on the Apple Watch demonstrated 98.3 percent sensitivity in classifying AFib and 99.6 percent specificity in classifying sinus rhythm in classifiable recordings. And it says that in the Apple Heart Study — the largest screening study on atrial fibrillation ever conducted, with over 400,000 participants — 80 percent of participants who received an irregular rhythm notification while simultaneously wearing an ECG patch showed AFib on the ECG patch.

“The FDA worked closely with the company as they developed and tested these software products, which may help millions of users identify health concerns more quickly,” he said in a statement.

The Apple Watch Series 4 retains a photoplethysmography (PPG) sensor, which estimates beats per minute (BPM) by measuring the rate at which green light is absorbed by the blood flowing through your wrist. But ECGs are considered to be more accurate.

As ever, health data collected by the Apple Watch is encrypted on-device and in the cloud.