Arm is introducing something called the Arm Neoverse, a cloud-to-edge infrastructure to support a world with a trillion intelligent devices.

I suppose you can call this optimistic brand name the logical extreme of the internet of things, the fully built out ecosystem of everyday objects that are smart and connected. The Arm Neoverse is a roadmap for infrastructure and a new brand identity for the ecosystem built around Arm’s low-power processor designs, said Drew Henry, senior vice president and general manager of Arm’s infrastructure business, in a blog post.

“Arm Neoverse-powered products from our global ecosystem will enable the diverse set of high-performance, secure, and scalable solutions required for the infrastructure foundation in a world of a trillion intelligent devices,” Henry said.

Last year, Arm’s partners shipped nearly 25 times the semiconductor wafers (which are sliced into chips) as all other processor architectures. That tells you just how big the smartphone and internet of things markets have been for Arm, which designs processors and licenses them to its customers, who use the designs in their own chips. Arm’s partners have shipped 130 billion chips to date.

On stage, Henry said that a billion sensors would create 400 exabytes of data a month. That compares to the creation of 150 exabytes of data that the world produces today. The 400 exabytes would require 40 million servers to process the data. He said IDC reported that Arm is the No. 1 company in the data center, thanks to all of the chips used in networking equipment and servers, even though x86 chips from Intel and AMD are the brains of those servers. 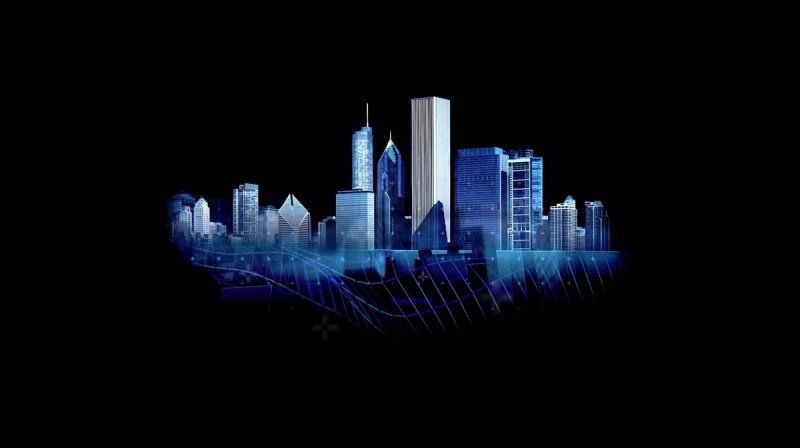 Above: Arm plans to be the glue for all tech.

“The massive scale of our ecosystem attracts significant investment, leading to everything from the best design tools to the most advanced process nodes,” Henry said.

About 70 percent of all data transiting the internet today is video, and most of that data is flowing out to the billions of people carrying smartphones — everything from videos on Facebook and YouTube to streaming movies from Netflix and Hulu.

“As we move to a world with a trillion connected devices, that traffic pattern is changing, and the sheer magnitude of data is growing significantly,” Henry wrote. “Vast amounts of data will flow into the network from things like high bandwidth video sensors used to collect information, and much of the compute needed to extract and analyze that information will move to the edge, or directly into the device.”

Arm said that developing products for the infrastructure is complicated. From high-performance servers to power-efficient edge compute platforms to gateways and wide-area network routers, Arm wants to be the single platform for the network and the devices connecting to it. 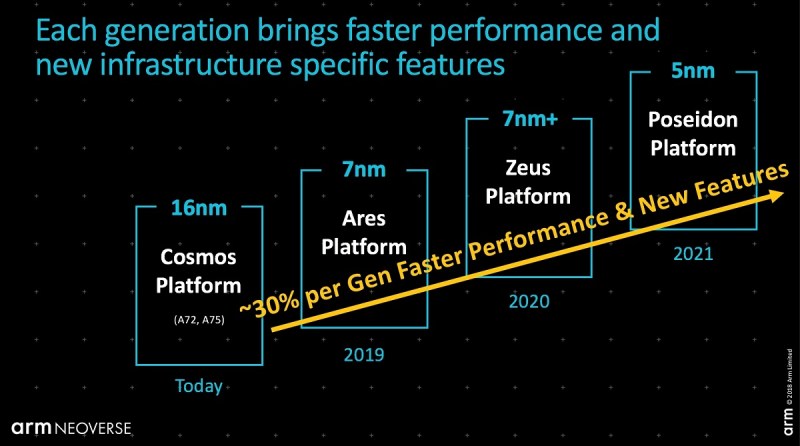 Arm’s Neoverse intellectual property will take advantage of high-end manufacturing equipment in chip factories. The Ares platform will debut in 2019 with 30 percent per generation performance improvements, Henry said. The designs will be flexible for customer purposes and security will be a crucial part of the platform, Henry said. Ares will be built on seven-nanometer circuitry in the newest chip factories. Follow-up chips include the Zeus at seven nanometers and Poseidon at 5 nanometers.

The Arm Neoverse will include advanced processor designs as well as solutions and support for hardware, software, tools, and services. The company announced the platform at the Arm TechCon event in San Jose, California.

“Arm has been more successful in infrastructure than many knew. This makes sense as many networking and storage systems have Arm-based chips inside, albeit with smaller cores,” said Patrick Moorhead, analyst at Moor Insights & Strategy, in an email. “I don’t think Arm has made as much progress in larger core scenarios such as general purpose servers as they would have liked. Many of these chip companies either stopped developments, went out of business or scaled back custom big core designs.”

He added, “With today’s announcement, Arm is doing exactly now what they should be doing, and that is to develop its own ‘big cores’ IP for customers to license with a long term roadmap commitment. Prior to this, its big cores were developed in-house by silicon providers like Qualcomm, AppliedMicro, Ampere and Cavium. Arm is also making much bigger investments directly into the ecosystem at levels I haven’t ever seen before. This increased investment is a direct result of the SoftBank acquisition.”