A few days ago I was having network problems with the WiFi in my home office — my connection was very slow and video conferences were freezing. After fussing with the mesh network extenders with no result, I called the cable provider. Normally, this involves having to navigate several automated voice response menus before a call center representative comes on the line to help. I explain the problem and they then run a remote diagnostic and usually suggest a cable modem reset. Often, that solves the problem.

But in my latest attempt to get back online, the menus had changed and speaking to a representative was no longer an option. Just, “press 1 to reset the modem.” And just like that, it worked.

Something is lost in this process, but something is gained. The human was removed, and the problem was resolved — probably in less time. Explaining the problem to a human had often been a source of frustration, due to language challenges or possibly my poor descriptive abilities. In fact, some of my worst customer service experiences have been with this cable company. But with this change it was hard to miss the advance in automation and I had to acknowledge the role of AI as a key enabler. This story is, in fact,  an example of what is now often called intelligent automation, the combination of artificial intelligence and automation that synthesizes vast amounts of information to automate entire processes or workflows

I also had to wonder what happened to the call center representative. Did they go on to one of those positions we hear about that entail higher strategy tasks? Or perhaps they received a layoff notice. I tried not to think of their personal circumstances, about whether they could readily find other work or would face real hardships. Then again, maybe this will free this worker to pursue a more interesting opportunity.

This dual nature of automation — the increase in efficiency and productivity along with the potential human impacts — is the stuff of anxious dreams. Because we hear the same two stories — many jobs will disappear, while new professions will emerge to replace them. The anxiety lives in the gap between, wondering and worrying about what this new reality will bring.

What if new jobs do not materialize?

Even if these new professions do not materialize, not to worry because there will be so much wealth generated by AI and automation that every adult will receive a monthly stipend, much as Alaska residents receive from oil royalties. At least that is the point of view of OpenAI Co-founder and CEO Sam Altman, as expressed in a recent blog, where he writes that we are witnessing a “recursive loop of innovation” that is both accelerating and unstoppable. Altman goes on to argue that the AI revolution will generate enough wealth for everyone to have what they need, spinning off dividends of $13,500 a year.

It could be that his view is inspired and filled with a generosity of spirit, or it could be disingenuous. The Universal Basic Income Altman envisions would be great as a bonus but a poor Faustian bargain if in the process many join the ranks of the long-term unemployed. Several other people have pointed to the flaws in his proposal. For example, Matt Prewitt, president of non-profit RadicalxChange, commented: “The [Altman] piece sells a vision of the future that lets our future overlords off way too easy, and would likely create a sort of peasant class encompassing most of society.”

The prospect of a permanent underclass brought about by AI and automation is increasingly portrayed in fiction looking out on the next 20 to 50 years. In The Resisters, a novel by Gish Jen, unemployed people are deemed “Surplus,” meaning there is no work for them. Instead, they are issued a Universal Basic Income at levels just above subsistence. In the new novel Klara and the Sun from Nobel prize winning author Kazuo Ishiguro, large swaths of the population have been “substituted” by automation. The novel describes how a growing income disparity between those with jobs and those without leads to a fracturing of society with increasing tribalism and fascist ideology. Burn-In, a novel from P. W. Singer and August Cole, describes growing automation that has taken millions of jobs and left many people fearful that the future is leaving them behind. In their extensively documented novel, referencing technology that already exists or is far along in development, AI has advanced so far that once-safe fields such as law or finance have been taken over by algorithms, leading to political backlash, with large numbers of people becoming radicalized in extreme virtual communities.

Taken together, these portrayals of the not-too-distant future are a long way from Altman’s utopia.

It remains to be seen where automation will lead us. Perhaps what will determine the true tipping point is how our institutions respond to this new reality as it accelerates and evolves. Altman warns that if in response to these changes “public policy doesn’t adapt accordingly, most people will end up worse off than they are today.”

Not everyone is concerned about AI and automation. On the one hand, it is broadly granted that the COVID-19 pandemic accelerated automation and reduced employment, what the World Economic Forum describes as a “double-disruption” scenario for workers leading to growing inequality. On the other hand, some argue there will be changes in the types of available work — and some people will be displaced (like my call center representative) — but overall employment will not be greatly impacted. Afterall, as these arguments often go, this is what has happened in prior technology revolutions. According to Richard Cooper, the Maurits C. Boas Professor of International Economics at Harvard University, “new technology often destroys existing jobs, but it also creates many new possibilities through several different channels.” Cooper says those new opportunities can take decades to emerge, though, which doesn’t sync with the pace of post-COVID job losses. Others argue that dystopian predictions about automation are fraught with exaggerated timelines and that the feared robot apocalypse is still far away.

Most likely, the full impact of automation will not likely be seen until some years into the future. That is the conclusion of a PwC study from a couple of years ago that described several waves of automation. During the first wave, they expect relatively low displacement, “perhaps only around 3% by the early 2020s.” This could explain why the debate about the impact still seems more theoretical than pressing, with far more substantial impacts over the next 10 to 15 years. During the first and second waves, women could be at greater risk of automation due to their higher representation in clerical and other administrative functions, but later automation will put more men at risk.​ It’s worth underscoring that PwC did this analysis pre-COVID and so its conclusions don’t account for the rapid uptake of automation over the past year and how this could further accelerate the waves of automation going forward. 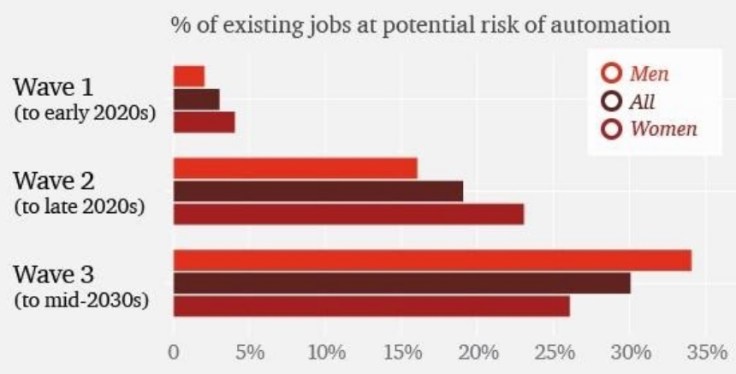 Nevertheless, we can already see and feel it, and this is permeating throughout society. It is not only those doing routine work who are at risk, but increasingly those in white collar professions. A recent PwC survey of employees worldwide revealed that “60% are worried that automation is putting many jobs at risk; 48% believe ‘traditional employment won’t be around in the future,’ and 39% think it is likely that their job will be obsolete within five years.”

The longer-term impact of AI and automation on work is not really in doubt. Many positions will be disrupted and people replaced, even as other employment opportunities may be created. The net effect is likely to be positive for the economy. This could be good for economists and corporate shareholders. Though whether it is positive for a large percentage of the population or produces a sizable permanent underclass is very much to be determined. Automation will not likely bring about either utopia or dystopia. Instead, it will lead to both, with different groups experiencing these very different realities.