Chinese technology giant Baidu has outlined its next big steps as it looks to advance its ambitions in the autonomous vehicle space.

Ahead of its second annual Baidu World technology conference, the Beijing-based company yesterday announced a two-year project with Ford to test self-driving vehicles on Chinese roads, with plans to start trials in Beijing by the end of 2018.

Baidu said that within two years it hopes to reach “level 4” driving automation, which is pretty much fully autonomous, except in certain driving conditions where human intervention may be required. This is thought to be a first for China in terms of passenger cars, though Baidu has previously launched a level 4 autonomous shuttle bus, which has been deployed in more than 10 regions across China.

During the event itself, Baidu made a number of other notable announcements relating to its plans in the automotive realm.

First up, it revealed a partnership with Chinese state-owned car company FAW Group, which develops the Hongqi line of luxury cars, and unveiled its first level 4 autonomous passenger vehicle, which is powered by Baidu’s Apollo autonomous driving platform. Baidu announced Project Apollo in April 2017, and in the months since it has brought on a bunch of big-name partners, including Intel, Nvidia, and NXP.

Similar to its Ford tie-up, Baidu said it hopes to launch a “limited number” of Hongqi level 4 autonomous vehicles early next year, with plans to ramp up these tests across the country in 2020. 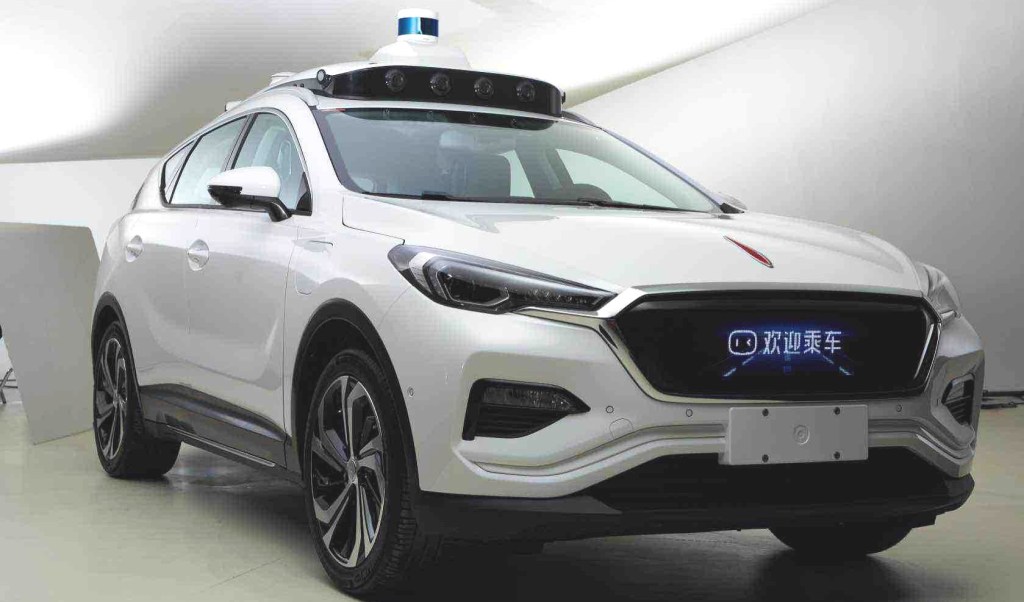 Above: Baidu and Hongqi: Level 4 car

Elsewhere, Baidu also announced a partnership with Volvo to develop autonomous electric cars specifically for the Chinese market. This will see Baidu throw its Apollo platform into the pot alongside Volvo’s automotive expertise — you may recall that Volvo last year committed to making only electric and hybrid cars from 2019. This latest partnership fits firmly into that broader plan.

Baidu also revealed that it will launch a fleet of more than 100 autonomous taxis in 2019, kicking off in Changsha in south central China.

Though Baidu has initiated self-driving taxi trials in the past, the company said this will be its first autonomous fleet that is underpinned by the Apollo Intelligent Vehicle Infrastructure Cooperative System, which integrates connected vehicles with smart road infrastructure to improve safety. One example of this integration involves traffic lights, which can be synced so that traffic signal cycles are tweaked to suit the shifting patterns of vehicle movement. This is similar to how some local authorities are already leveraging ride-sharing data to improve traffic flow.

“The era for autonomous passenger vehicles is upon us, but having only smart cars is not enough,” noted Baidu chair and CEO Robin Li. “We also need smart roads. By leveraging our capabilities in autonomous driving and AI technologies, we can develop comprehensive solutions that will greatly improve the efficiency of urban cities.”

The battle for the burgeoning autonomous transport market is intensifying. One of the other major global players is Alphabet’s Waymo, which recently announced that it had doubled its self-driven test miles on public roads to 10 million. Earlier this week, Waymo announced that it had obtained California’s first fully driverless car permit, paving the way for the company to kickstart trials of its self-driving Chrysler Pacifica minivans.

Though Baidu — often referred to as the Google of China — is testing its smarts in a different market from that of Waymo, today’s announcements help highlight the growing competition as major automakers seek to get fully autonomous vehicles onto public roads. Google’s sister company Waymo is leading the charge in the West, while Baidu is arguably head of the pack in the East.