Thousands of Facebook Messenger, Slack, Skype, Kik, and Telegram bots can now be found by searching Bing.com, a source familiar with the matter has informed VentureBeat.

Bots in dozens of categories, including travel, entertainment, sports, and news, can be surfaced by entering a phrase like “travel bots” or “entertainment bots” into the search box on Bing.com.

When Bing surfaces bot search results, each chat app platform is displayed in a dedicated area at the top of the results. Search for bots on Bing today and you’ll find that the selection of highlighted bots may not be the very best bots available, but it’s a start and is far more extensive than anything currently offered by other chat apps.

Bots can either be viewed by individual platform or as an aggregate to display the best bots from all five bot platforms.

At Build 2017, alongside a stream of news about AI, bots, and Cortana, Microsoft yesterday announced that Skype bots can now be found in Bing search results.

Bots from multiple platforms have actually been part of Bing search results in some capacity for months now, and more bots and chat platforms may be added in the future, said the source, who asked to remain anonymous.

Cheng, who may be one of the most influential players in the space, has been a driving force behind the bot craze of the past year or so, having worked on projects ranging from the infamous Tay to new customizable cognitive services to bringing together bot startups and chat platform stakeholders in the Botness group. 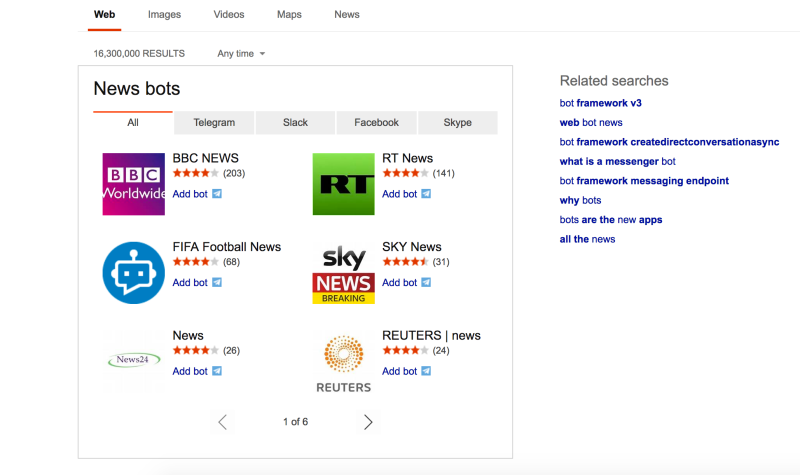 “There are just a lot of bot developers who, like us, just want our bots to be discoverable, and they’re sort of at the mercy of each channel,” she told VentureBeat. “So we were thinking that we could use search. And then [being able] to try them out there on the web is really cool.”

In other news from Build 2017, the Microsoft Bot Framework, which is now used by more than 130,000 developers, got a series of new features, including the ability to make payments and to publish bots to Skype for Business, Bing, and Cortana.

The Cortana Skills Kit is now publicly available, with roughly 50 skills that can teach you how to make a Manhattan, order a pizza, or take care of a child. Customizable artificial intelligence services developed out of Microsoft Research, as well as Skype video bots and Skype chat for web pages, were also announced.