The checkout platform Bolt — not to be confused with the blockchain startup Bolt Labs, the hardware investor Bolt, or the ride-sharing firm formerly known as Taxify — today announced that it recently closed a $75 million funding round. The infusion comes after a year during which Bolt processed over $1 billion in retail transactions, saw a 10 times uptick in the size of its shopper network, and added more than 250,000 shoppers to its network every month.

While consumer spending in the U.S. dipped last month year-over-year, on the whole, the pandemic has supercharged ecommerce. According to data from IBM’s U.S. Retail Index, business closures and shelter-in-place orders accelerated the shift away to digital shopping by five years, with online shopping projected to grow nearly 20% in 2020. Based on the survey data from BMC and Mercatus, ecommerce grocery orders alone totaled $5.9 billion, up 3.6% from $5.7 billion in August, the most recent prior-month data available.

San Francisco-based Bolt, which was founded in 2014 by Eric Feldman and Ryan Breslow, provides several tools designed to streamline web transactions. Bolt’s business model initially revolved around currency in online checkouts, but Breslow and Feldman decided to shift focus to lower-hanging ecommerce fruit. The two and their team spent the better part of three years developing technology around checkout and fraud detection that integrates with platforms like Shopify, Magento, BigCommerce, Woocommerce, and Salesforce Commerce Cloud. 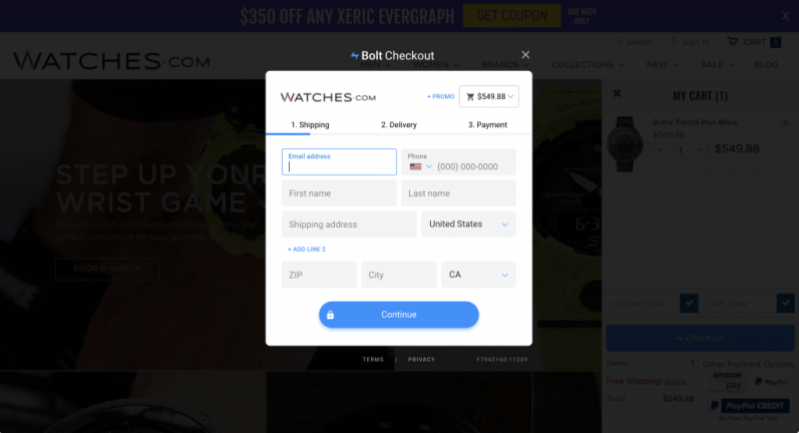 Bolt claims its checkout page is up to 10 times faster than the competition, thanks to a preprocessing technique that loads elements in less than a second. The flow doesn’t require customers to enter a billing address, and its mobile experience is no-scroll and above-the-fold, with a post-checkout registration model. Shoppers can choose to sign up for an account after they’ve entered their payment information.

To reduce fraud, Bolt captures mouse pointer locations, typing speeds and accuracies, copying and pasting behaviors, and other browsing, cart, and checkout data. Its machine learning algorithms analyze over 200 variables on each transaction, and a dedicated team reviews every declined transaction. Customers flagged as potentially malicious are afforded the chance to provide additional information to get their orders approved.

Bolt charges a flat, percentage-based fee per transaction. It matches processing fees and claims that the average customer realizes cost savings of 10-50%, which works out to about $25 million in new revenue. More than 100 merchants had the platform deployed into production as of January 2018, including Burt’s Bees, Swiss Gear, Milk Makeup, and others.

Last month, Bolt announced a partnership with Authentic Brand Group (ABG) to work together to bring the former’s checkout experience that spans all of the latter’s retailers. The experience is already live with Forever21, Bolt says, and will expand to other ABG companies including Lucky Brand, Brooks Brothers, Aéropostale, Juicy Couture, Nine West, Volcom, and Nautica.

Bolt’s latest round, which brings the company’s total raised to over $215 million, was led by General Atlantic and WestCap, with participation from existing investors Activant Capital and Tribe Capital. Angel investors in Bolt include founders and retail executives at Allbirds, Athleta, Crocs, Jet.com, and Revolve, as well as technology executives from Venmo, PayPal, and Magento.