Leave it to Bose to take on heavyweights like the Google Home, Apple’s HomePod, and Amazon’s Echo with smart speakers of its design. On the eve of the IFA consumer electronics conference in Berlin, the Massachusetts company today announced three new products — two soundbars and a smart speaker — that boast eight-array microphones (the same built into Bose’s headphones) and tap into Amazon’s Alexa Voice Service for voice recognition.

“All of our new smart speakers double up on functionality,” Doug Cunningham, category manager in the Bose Consumer Electronics Division, said in a statement. “It takes just one Home Speaker 500 to deliver true stereo separation — there’s no need to pair two. Our Soundbar 700 and 500 are thin and discreet with jaw-dropping surround sound — whether you’re streaming Spotify or watching a movie.”

The most intriguing of the bunch is the $400 Bose Home Speaker 500, Bose’s first smart speaker. It’s a squat, round 8 x 6 x 4-inch aluminum cylinder of a thing with a built-in color screen that shows the album cover of whatever’s playing, and physical buttons that control playback and queue up playlists. Audio quality is the clear selling point here — the Home Speaker’s got two powerful drivers designed to reflect sound off of walls and separate instruments into distinct left and right channels. Bose claims it has the “widest soundstage” of any smart speaker available today. 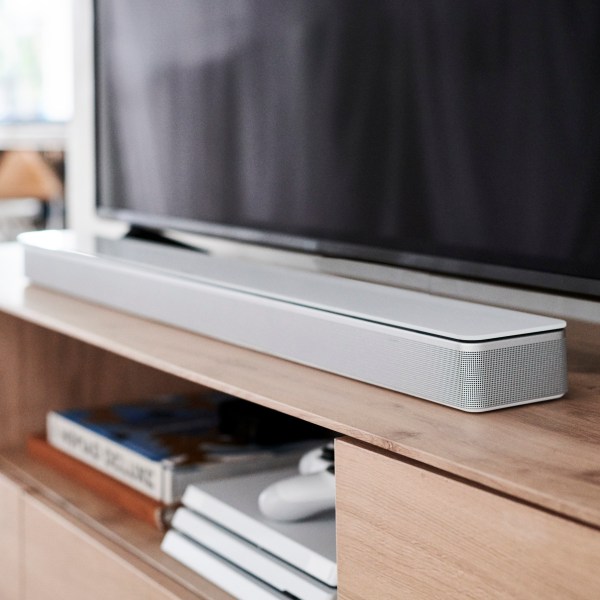 The new soundbars boast equally impressive features. The $800 Bose Soundbar 700, which measures 2 x 4 x 38 inches, has a metal grille and tempered glass, and under the hood a custom digital signal processor (DSP) and low-profile transducers that deliver “exceptional detail and depth for your favorite tracks.” Also on tap are Bose’s PhaseGuide tech, which “[places] discrete sound in places where there are no speakers,” features slots for wall mounts, and offers plug-and-play compatibility with 5.1 surround sound setups.

Both have HDMI ARC and Bose’s ADAPTiQ tech, which optimizes sound for the shape of the room. And they, along with the Bose Home Speaker 500, will gain functionality with Apple’s AirPlay 2 in early 2019 via a software upgrade (plus support for additional voice assistants).

Bose’s debut smart speaker comes just weeks after the unveiling of Samsung’s Galaxy Home, which features omnidirectional AKG speakers, a subwoofer, a far-field microphone array, and Samsung’s homegrown Bixby assistant. And it’s hot on the heels of the Sonos Beam, a smart speaker and TV soundbar that comes with Alexa control (and soon Apple’s Siri and the Google Assistant).

If analysts are to be believed, though, there’s plenty of room for new entrants in the smart speaker market. Canalys reports that it grew 187 percent in the second quarter of 2018, and that collectively, Apple, Google, Xiaomi, Amazon, and others shipped 16.8 million units, up from nine million in Q1 2018.