Startup founders and some members of the Bots Facebook group are accusing its creator, Matt Schlicht, of misleading them about his intentions. In May, Schlicht asked for and received more than 100 pitch decks from entrepreneurs after offering to help connect them with investors. The furor erupted this week when Schlicht launched his own bot startup, Octane AI.

“It’s frustrating because he was creating a competing product, and had all of our information for months, and we had no clue,” said Steffan Howey, CEO and cofounder of Lifecycle, a chat app and bot creation platform.

Howey said he shared a pitch deck with Schlicht in May but never heard back from Schlicht and was not contacted by investors.

“And because we were competitive to what he was secretly working on, it would be easy for me to make some assumptions that he may not have actually shopped our deck around like he said,” Howey told VentureBeat. “Why would he have? He was trying to get his own startup funded.”

Schlicht has maintained that he gathered the pitch decks from some of the top bot startups because he wanted to connect them to venture capitalists or angel investors. But, as he has acknowledged, he failed to disclose that he was working on his own bot company. It’s unclear whether information Schlicht shared resulted in funding for any companies who shared pitch decks.

“I should have told everybody I was doing a company so they could make a decision about whether to share their presentation with me,” said Schlicht in a videotaped apology. “I didn’t. I’m sorry. That was a huge mistake and I’m sorry.”

One month prior to inviting startups to send him their pitch decks, Schlicht started the Bots Facebook group, which has grown to nearly 18,000 members in six months. The most active members today are startup founders or members of the bot industry, like Chris Messina and API.ai founder Ilya Gelfenbeyn. Schlicht also created Chatbots Magazine, which has published the work of 400 authors.

These roles cemented Schlicht’s position as a leader within the bot community. But when the Octane AI bot platform launched Wednesday and announced $1.5 million in funding, the backlash was swift.

Almost immediately, members of the Bots Facebook group began to express anger and a sense of betrayal. Some wrote that Schlicht had misrepresented himself and said they wouldn’t have shared information about their companies if they had known about Octane AI. 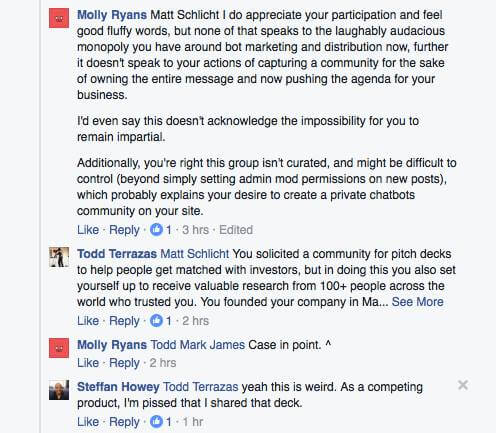 “This community just got scammed!” wrote Molly Ryans, a member of the group. Schlicht reacted by banning her from the Facebook group. VentureBeat messaged Ryans for further comment, but her Facebook user account no longer exists.

Schlicht also stoked the flames of indignation by blocking comments on posts related to pitch decks and his lack of disclosure. Schlicht defended these moves as an effort to change the discussion to what he feels are more important matters, like new API.ai features.

“It causes a lot of commotion in the Bots group,” Schlicht said. “The purpose of the Bots group isn’t necessarily to discuss this [lack of disclosure]. It’s to share lots of different stories, and so what I did was shut off comments and directed all the conversations related to this to a new post so that it wasn’t taking over the entire group.”

As a protest against the banning of Ryans and Schlicht’s lack of disclosure, the hashtag #WAAB (We Are All Banned) was started, and at least half a dozen new bot groups were created or shared in the group feed.

By midday Thursday, Schlicht was in a defensive mode. He posted an apology video, shared a link to a months-old Octane AI pitch deck, and created forms for people to apply to become moderators of the Bots group.

Members of the group can now nominate themselves or someone else to become a Bots group moderator. A vote will be held on the Bots group to choose new moderators. However, Schlicht will gather the names, review them, and determine which nominees move forward for a vote.

“Not everybody that I introduced got funding, but some of them did and that’s awesome.” Schlicht said in the apology video.

However, in an interview with VentureBeat, Schlicht admitted that investors never saw the pitch decks. Rather, pitch decks were gathered so Schlicht could evaluate which startups were worth sharing with investors. A list of more than 100 was reduced to about 20 companies, like Automat.ai, Zoom.ai, commerce bot Kip, character maker Imperson, travel bot Alterra, and the polling bot Polly, whose maker recently worked with Microsoft on the launch of Microsoft Teams.

Then, Schlicht said, he shared the names of these companies via email with 35 investors, people at venture capital firms like Sequoia Capital, Lightspeed Venture Partners, and Greylock Partners. Investors then picked which companies they wanted to meet and an email introduction was made, Schlicht said.

Schlicht points to Eva, a bot that sends gifts, and another startup (which asked to be kept anonymous) as companies that received funding as a result of a warm introduction.

Yet the creators of Eva and the other startup told VentureBeat that their companies received funding thanks to help from Schlicht — just not via the email introductions at the center of this controversy.

People who handed over their pitch decks to Schlicht shouldn’t be surprised, said Smooch cofounder and head of product Mike Gozzo in a comment on the group’s Facebook page. “I’m a little surprised to see so much shock over this. It’s heinous, sure, but many of you saw it coming from a mile away and you still shared pitch decks?” he said.

Schlicht is an entrepreneur who has created multiple businesses and is an alumnus of the Y Combinator startup accelerator.

“It doesn’t matter whether the motives were ulterior or were really to serve the community. But without at least a pinch of selfish motive, no one could’ve built this kind of a good group or forum,” wrote Srinath Akula, who suggested that Schlicht invite more moderators to participate in the forum.

On Thursday, amid talk of forming new bot groups, some members wondered if this was the Bot group’s equivalent of Brexit — or Botxit.

Whether through the Bots group he created or another group, Schlicht believes the community needs a forum to allow people to connect, experiment, and help one another.

From this incident, Schlicht said he learned that next time he should err on the side of full disclosure.

And of the promised connection to investors, some bot community members learned something too: If something appears too good to be true, it usually is.