China will overtake Europe in artificial intelligence research paper output within the next four years if current trends continue, according to a report released today by business analytics company Elsevier.

The report found that the U.S., home to tech giants like Google, Amazon, and Facebook, has succeeded in attracting the top talent in artificial intelligence. It also shows that research in the U.S. is shifting from academic settings to research operations within large tech companies.

China started to outpace research from the U.S. in total number of papers published in 2004, the report said.

“China aspires to lead globally in AI and is supported by ambitious national policies,” the report reads. “A net brain gain of AI researchers in China also suggests an attractive research environment. China’s AI focuses on computer vision and does not have a dedicated natural language processing and knowledge representation cluster, including speech recognition, possibly because this type of research in China is conducted by corporations that may not publish as many scientific articles.”

In addition to a growing body of research from companies like Baidu and Tencent, China is home to some of the best-funded AI companies on Earth.

Earlier this week, for example, news emerged that Face++ parent company Megvii is reportedly looking to raise an additional $500 million at a $3.5 billion valuation.

In addition to reports from Future Today Institute and the annual Internet Trends Report that chart China’s growing AI dominance, tech luminaries like Dr. Kai-Fu Lee and former Baidu COO Qi Lu — who have spent time in leadership positions at top tech companies in the U.S. and China — have predicted that Chinese AI initiatives will overtake those in other parts of the world in the years ahead.

Despite the total number of papers published, Chinese AI research papers have not seen as much citation among peers, a trend that could be a symptom of regional rather than global reach, the report found.

India is currently third in output of AI research papers, behind the U.S. and China. Germany and Japan rank fifth and sixth worldwide in AI research paper output, while Iran, in ninth place, ranks alongside countries like France and Canada. 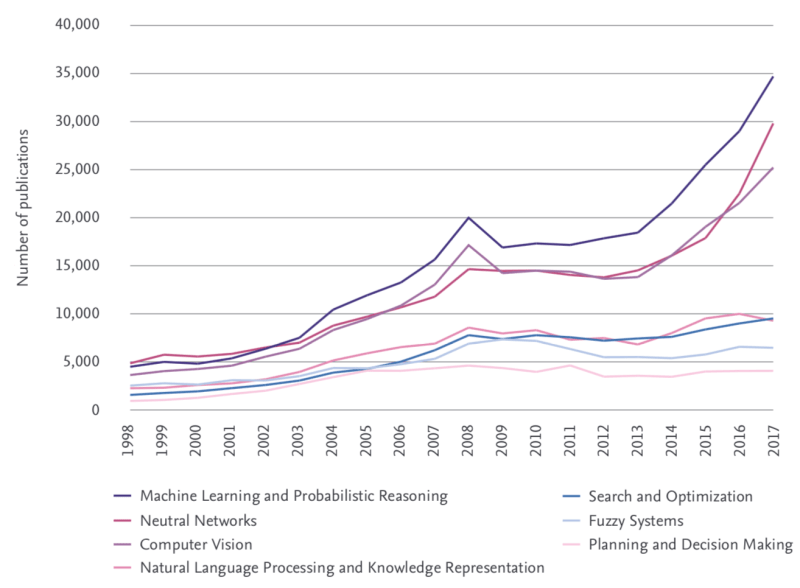 Publication categories that have seen the highest level of growth in that period include machine learning and probabilistic reasoning, computer vision, and neural networks.

When considered as a region, Europe currently leads the world in scholarly output related to artificial intelligence, according to the report.

The annual State of European Tech report released last year by venture capital firm Atomico urged greater connections between the region’s tech sector and research institutions in order to compete with China and the U.S.