CrowdAI, a computer vision development platform, today announced that it closed a $6.25 million series A financing round led by Threshold Ventures. The fundraising coincides with the launch of the startup’s new solution that allows customers to create AI that analyzes images and videos.

The AI skills gap remains a significant impediment to adoption in most enterprises, a 2020 O’Reilly survey found. Slightly more than one-sixth of respondents cited difficulty in hiring experts as a barrier to AI deployment in their organizations. In a separate report, this by Deloitte, 23% of “seasoned” AI adopters characterized the gap between their AI needs and current abilities as “extreme.”

Devaki Raj founded CrowdAI in an effort to eliminate adoption blockers specifically in the area of computer vision. Prior to starting CrowdAI,  Raj studied statistics and machine learning at Oxford, where she earned a master’s degree before working on Maps and Android at Google. She left Google 5 years ago to launch CrowdAI alongside Nicolas Borensztein and Pablo Garcia.

CrowdAI helps develop computer vision models for clients primarily in the property insurance, finance, and technology markets. The first iteration of the platform focused on cutting down time-to-value for developers and data scientists familiar with AI integrations and workflows, but CrowdAI’s newest release — which is available in free and enterprise versions — requires no coding.

“Our business model isn’t about selling already-trained models — quite the opposite. We’re focused on providing a platform for subject matter experts who aren’t data scientists to build their own models that solve their specific problem,” Devaki Raj told VentureBeat via email. “For example, natural gas utilities are under enormous public pressure to identify and mitigate leaks and microleaks from thousands of miles of pipeline and related infrastructure. These leaks are easy to see on thermal video, but reviewing all that footage in real-time just isn’t scalable. Using computer vision, a machine learning model could review terabytes of imagery each day looking for methane leaks so humans don’t have to.” 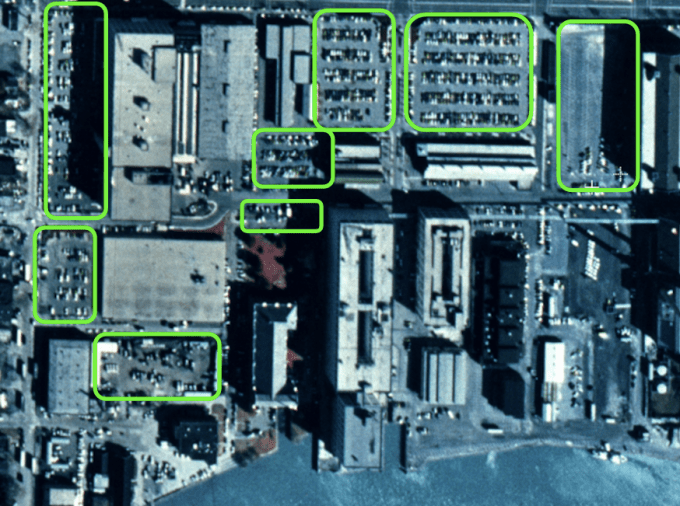 Controversially, CrowdAI has had contracts with the U.S. military, including one with the U.S. Air Force to turn public satellite data into combat insights as part of a prototype. (CrowdAI’s history with the Air Force began in 2018, when it participated in the inaugural cohort of the Air Force Research Lab’s Hyperspace Challenge.) The company has proposed highlighting patterns, movements, and changes in maps used by airmen that might otherwise go unnoticed, as well as compiling, analyzing, and mapping out regions in which the U.S. military operates.

In pitches in front of academics, contractors, investors, and Air Force acquisition officers, CrowdAI has demonstrated its technology identifying flooding in the aftermath of Hurricane Harvey, the extent of damage after wildfires, and buildings after bombings in Aleppo. In one presentation, Raj showed the platform mapping all major roads in Syria within six hours.

In a previous interview with Wired, Raj declined to say which applications of CrowdAI’s platform she considered off limits. But a CrowdAI spokesperson clarified that the company doesn’t currently have an Air Force contract for combat insights.

“Our goal is to equip the next generation of employees to become educated in how computer vision can empower them,” Raj said. “It’s not about teaching computer science or AI per se, but arming them with those skills so they can recognize where in their workflow AI can be their partner.”

It’s proven to be a winning strategy. CrowdAI says it saw a 200% increase in its customer base over the past year.

“In some ways, the pandemic has accelerated the need for AI across the board. Companies seem acutely aware of the fragility of the supply chain, and are looking for tools and tech that can help make it more efficient and predictable,” Raj continued. “When it comes to computer vision, our goal is to empower — not replace — humans at the companies and organizations we work with. We help them create AI and machine learning to meet their own specific needs, which frees these people up to focus on higher-order tasks, such as decision making and planning. This means the same workforce can now work smarter and faster because they don’t have to spend as much time on analyzing and managing visual data.”

CrowdAI has raised over $10 million to date. Other investors that participated in its series A included Susa Ventures, Ron Conway’s SV Angel, Jerry Yang at AME Cloud, and Y Combinator.